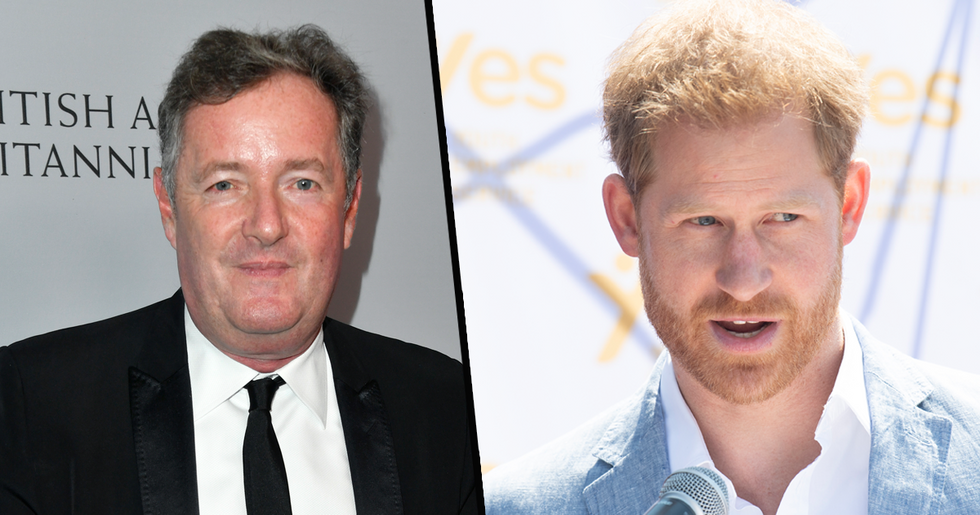 It's very rare when Piers Morgan isn't making headlines for his bold and often outrageous comments. Usually, Morgan's tantrums are targetted towards one person, in particular... take his vendetta against Meghan Markle, for instance.

But this time, he's decided to direct his anger at her husband, Prince Harry, instead, in what has been described as a "scathing rant." Fans were left speechless after witnessing the meltdown.

Keep scrolling for the savage video...

Piers Morgan has made the headlines, yet again.

You know that filter that most of us try and implement while we're talking? Well, it seems as though the former TV judge just doesn't have that and because he is lacking, he always seems to find himself offending the masses.

Whether it be ranting about the royals, or mocking an entire nation...

It seems as though Morgan always finds one thing or another to latch on to so that he can spread some "well-informed" trash to audiences around the world.

However, recently, he's become somewhat of a hero.

Yes, you read that right. The day time TV host has given up his crown of terror and swapped it out for a cape instead.

While the virus continues to infect our world, Morgan has taken it upon himself to call out injustice when he sees it.

Besides this "all-star" list, which we will get into in a minute, he has decided to do a public service by asking his followers if they have unfairly been let go by their employers so that he can help them...

...Even if that does mean just calling them out for his millions of followers to see.

Rather than attack the police for taking action to enforce life-saving social distancing, can we focus instead on a… https://t.co/022fSXkCSB
— Piers Morgan (@Piers Morgan)1585587139.0

I say it's God's work being done on the ground.

And we can't forget about his coveted list, can we?

Recently, he published a list in which he named the top twenty nominees for the unofficial title of the "Cov-Idiot." And it's actually hilarious to see how many famous faces it includes, but all of them are on there for very specific reasons.

And weirdly enough... we all found ourselves agreeing with Morgan.

Even when he started ranting about Meghan Markle and Prince Harry, we kind of agreed with him? Self-isolation must be getting to us... However, he might have taken it too far during a recent segment on Good Morning Britain..

The Duke and Duchess of Sussex found themselves at one end of the list...

Surprisingly, Megan Markle and Prince Harry sat comfortably on the twenty spot. With the way Morgan rants about this pair, I thought they would easily claim the throne on the list, but I'm sure Morgan will be re-arranging the positions after Prince Harry's latest stunt.

Meghan and Harry have been involved in many scandals recently.

From their terrible protection advice to their "inconsiderate" way of sending support to the United Kingdom...

All the way to the way they sent their "love" to front line workers...

They just seemed to be rubbing people up the wrong way. while most of the anger seemed misplaced, Morgan addressed it all...

He had no shame in calling them out.

He wrote: "As British royals like the Queen and Prince William have risen to the crisis and been comforting faces and voices for people less fortunate, Meghan and Harry flew in a private jet to Hollywood to look round potential $20 million Malibu homes, whilst posting their best wishes to UK health workers ‘from across the pond.’"

"I don’t want to hear another word from this staggeringly entitled duo for the duration of this crisis."

But unfortunately for him, this was not the last scandal that the Sussex's would find themselves in. Read on to see the video of Morgan's full rant..

Prince Harry's latest scandal involves some comments he made about the state of the current medical crisis.

Tucked away in his Malibu mansion, Prince Harry had been doing British families a service by connecting with them over video call where he expressed happiness about the state of the United Kingdom.

However, a "misinformed" comment during a podcast really tarnished his positive energy.

The royal claimed that everything was being "exaggerated," and that the effort by people around the country proves that "things are better than we are led to believe" during a podcast called Declassified.

Medical experts have hit back at the prince for his statements.

Due to his influence amongst the public, health officials have warned about the dangers of his bold comments.

The news comes after 596 people died only yesterday in England.

Previous figures have seen death tolls peak close to 800 on average. So Harry's comments have come at completely the wrong time.

Not to mention, eighty front line workers have now died sacrificing their lives.

Harry, Harry, Harry... you’ve just lost me as a fan! Your mum would be disappointed in those ridiculous comments about Covid-19 #princeharry
— Paul Upcroft (@Paul Upcroft)1587339429.0

The heroes working as part of the healthcare system have seen the destruction this disease is doing, so from the safety of a mansion, it becomes easy to make such frivolous comments.

Some have claimed Harry made the comments to boost morale...

However, others have decided it was the wrong move to try to falsely deceive the public and of course, Piers was one of them.

And on Good Morning Britain we saw him at a boiling point while discussing the topic...

Piers insisted Harry was "making it all about him again" after "ditching his country" and fleeing to the States.

"I might remind him the world is in a war at the moment with a virus which is destroying lives and the lives of health care workers in this country. What was Harry’s contribution to this debate other than making it all about him again? To claim we’re all exaggerating this war."

"The brass neck of this guy, who ditched his country..."

"Now lives in a Malibu mansion, that I don't think he even pays for, lecturing us that we are exaggerating a war. When we have had deaths of eighty health care workers. We are showing people the reality of this and we’re not reliant on a pampered little duke in his Malibu mansion."

Yet again, he reiterated the same advice he had previously given to the Sussexes.

"I’m sorry to use tough language but the bottom line is I don’t want to hear from these two during this war. Making it about their little hurt feelings. 'Oh isn’t my life awful in my Malibu mansion'. Shut up, seriously."

Things took a very dramatic turn when his co-host Suzanna Reed opted to defend the pair.

In a heated moment, he yelled: "Why do you excuse them? You heard what he said. We are exaggerating it. This coronavirus crisis according to Prince Harry in his Malibu mansion is not as bad."

He then decided to commend the rest of the royal family.

"The Cambridges, unlike the Sussexes, are living, seeing, breathing it... No one seems to have told these two in their mansion in Malibu that no one cares. We care about health care workers. We don't care that she hates her dad. There's something a million times more important happening."

You can watch the full rant here:

Do you agree with Piers or had he taken things too far this time? If you can handle it, keep scrolling to check out some more royal content...