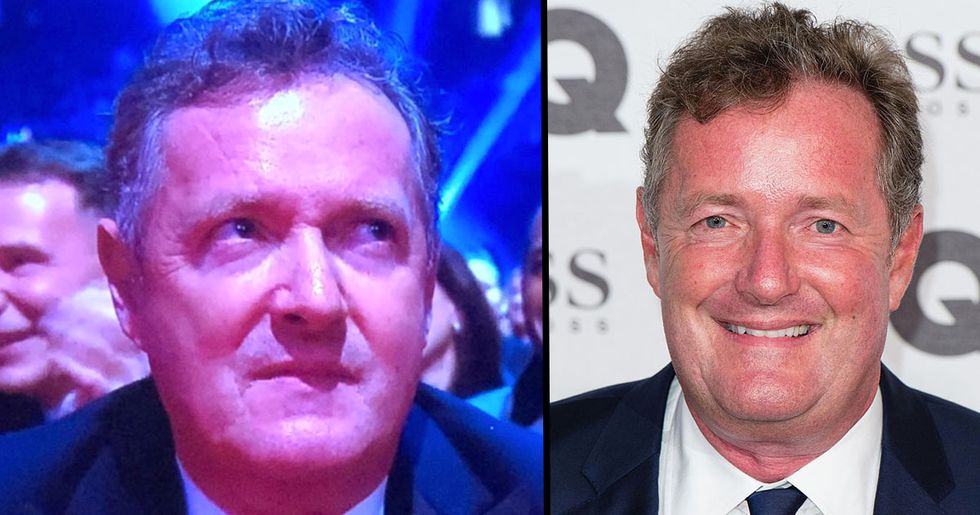 In today's divided world it's hard to come by figures that inspire such ubiquitous hatred, from both sides of the socio-political aisle, as the Good Morning Britain presenter and Celebrity Apprentice winner, Piers Morgan. It's refreshing that one man can act as an entire societies cringe lightning rod, it takes the load off other public figures that might need a little self assurance; 'at least I'm not Piers Morgan...'

Late into the first month of 2019, anti-fans of Mr Morgan were delivered a sterling treat at the National Television Awards (NTAs), when his popular talk show, Good Morning Britain, lost the category of 'Best Daytime Show' to ITV's This Morning and a picture showing the Ex-News of the World Editor sporting a bad-loser grimace surfaced online, prompting ridicule from various quarters of the net. Let's take you through what happened, and on a brief, curated presentation of reasons why you too can enjoy disliking Piers Morgan.

It's the night of the NTAs, and stars of British television from all over the country flood the Greenwich 02 Arena jostling for a chance at bonafide recognition.

Winners were announced throughout the star-studded night with awards for Question Time's darling David Dimbleby, 'soft-shelled hard man' Danny Dyer (pictured above) and This Morning.   This Morning, which airs weekdays from 10:30 on British channel ITV, always stood a better chance of winning 'Best Daytime Show', than Good Morning Britain, because it's presenters (Phillip Schofield and Holly Willoughby) are characteristically non-threatening.  And whilst watching Morgan's show is reminiscent of a bollocking from a bigoted schoolmaster, This Morning is more like breakfast with unassuming in-laws.

But there was one presenter that seemed to believe he deserved better, please enjoy a picture of Piers not receiving an award, as tweeted by @Lucy_Rosher.

From all quarters of the internet people took to twitter to laugh at Piers Morgan for his I-deserve-better-face. Describing his gammon face such gems as 'like someone shat in a kettle'.

Morgan's co-host on Good Morning Britain, Susanna Reid,  had an appealingly laid-back approach to not winning an award, tweeting 'I get to present without a hangover & @piersmorgan doesn’t have to mainline lentils...'

Reid's response prompted a characteristically sardonic reaction from Piers, who surprised nobody by turning the whole thing into an off-hand political opinion-piece.

Which left his goal open to...

Piers then took to twitter once more, this time to attack his own GMB team. Tweeting, 'that moment when you lose at the NTAs and your own co-workers find it funny...' To which the teammate in question, Andi Peters, responded 'It’s my nervous laugh of what tomorrow is going to bring!!!'

Bad luck, @PiersMorgan. We can tell you're absolutely delighted for @ThisMorning for scooping Best Daytime Show tho… https://t.co/Zjz5tRJauj
— ITV (@ITV)1548187877.0

And when the virtual dust had settled on the dispute, ITV couldn't help but weigh in with their own little prod at Piers. It seems even television executives don't like this guy, and that's saying something.

Seeing as I've got some space left over, that needs filling, I thought I'd dedicate the rest of the article to all the reasons why one should feel justified in their dislike of Piers Morgan. Please enjoy as your ambivalence weans.

This is probably the worst reason for disliking him but - nobody likes him, why should you! There are plenty of factual reasons not to like the guy but he does just seem to exude something doesn't he? So far he's managed to annoy Vegans, Democrats, Remain Voters, Leave Voters, the Shadow Home Secretary, and the British Army.

He's got a famous friend.

Since winning Celebrity Apprentice in 2008, Morgan cannot stop cozying up to Mr Trump, weighing in on various American talk shows to tell everyone to 'calm down' about the 45th President.

He flopped on the opportunity to hold Trump to account.

In 2018 Morgan conducted the first full television interview with President Trump, giving him the chance to press the President on key issues. But Morgan waived his responsibilities and the interview was described as 'chummy' in the press, with no questions concerning the ongoing Russia investigation.

He chides women for their clothing choices.

Morgan has gone after many different women in the public eye for their clothing choices, he's gone after Felicity Kendal, and Emma Watson on twitter for this very reason.

@piersmorgan Pensioners shouldn't be allowed to wear a penis on their heads either but here you are piers 😍😍😍
— Recia Lawrenson (@Recia Lawrenson)1504636021.0

Before we continue, check out the characteristic response on twitter to Morgan's shaming of Kendall.

Morgan uses British show Good Morning Britain as a soapbox to vent his own prejudices at the public, attacking various celebrities and weighing in on societal topics.

He makes people cry all the time.

Throughout his televised career, Piers has made an unusual number of people cry, normally over mundane, self serving quarrels - here's him castigating a mother to the point of tears over spoiling her child.

Piers has a knack for managing to irritate the opposite sex, describing women at the 2017 Women's March as 'rabid feminists... who just don't like men very much' on Good Morning Britain.

In 2016 Piers annoyed Rebekah Vardy, and the majority of his female viewership, by calling her a 'wag' (short for 'wives and girlfriends'), when referring to relationship to her husband, England soccer player Jamie Vardy. Rebekah was quick to call him up on the outdated phrase, to which Morgan replied, 'what do we call you if we can't call you wags.'

At the British Press Awards in 2004, Piers Morgan was hit three times by the ring-hand of the now-disgraced Top Gear presenter, Jeremy Clarkson. Which is excruciatingly annoying as it allows bragging rights for sad polar bear, contrarian Clarkson whilst simultaneously handing the moral high ground to Morgan.

In 2017, Morgan released details of BBC earnings above £150,000 an hour before their official time of publication, breaking the press embargo and undercutting every other journalist working on the story, before taking to twitter to brag about it.

Madonna just said she wants to bomb the White House. Any ordinary person who said that would be arrested, charged & jailed. #WomensMarch
— Piers Morgan (@Piers Morgan)1485030850.0

During the women's march of 2017, ageless pop star Madonna took to the stage and admitting to thinking about 'bombing the White House', a comment that was met with laughter and applause. Prompting Morgan to take to Twitter calling for her arrest.

Telling male sufferers of depression that they need to 'man-up'

When confronted with new statistics about mental health, Morgan decided that Britain was actually suffering from an epidemic of 'male soul bearing' and that men should 'get a grip' and 'man up'.  He was later confronted on his views by sportsman Stan Collymore.

On one of his Good Morning Britain rants back in 2017, Morgan annoyed pretty much the entire non-binary community, by comparing non-binary rights to 'elephant' rights, misguidedly shouting 'can I say I'm an elephant? Do I get afforded elephant rights?'

Criticising Adriana Grande in the wake of a terrorist attack

Piers went on twitter to criticise pop star Ariana Grande for not doing enough for survivors of the Manchester bombing, having to apologise when Grande returned to the city after organising a benefit concert.

Again, in 2016, Morgan found it appropriate to shame Susan Sarandon for her outfit she wore to present the In Memoriam section of the 2016 SAG awards, tweeting 'would you wear this to a funeral - no!'

Phone Hacking Scandal (going to need a couple of slides for this).

News broke that from 2002 to 2004, MGN (Mirror Group Newspapers) was involved in illegally obtaining private information for publication. Including hacking into people's phones and unlawful interceptions of voicemails. Much of this occurred during Morgan's time as editor in 2003, and Morgan denied the charges but...

Of course he was involved...

The Daily Mirror later admitted that stories 'likely to have been the product of illegal phone hacking' were published in editions of the newspaper during Piers Morgan's reign as editor. The Mirror has since set aside over 10 million pounds to account for future claims against the newspaper.

That's pretty much all you need to know about him. I would say 'he's fun to hate', but he's not really. I think Morgan is a vulgar, narcissistic, soap box contrarian and I'm glad he didn't win that award. Though you can make your own mind up. Here's Jim Jefferies on Bill Maher to play us out...