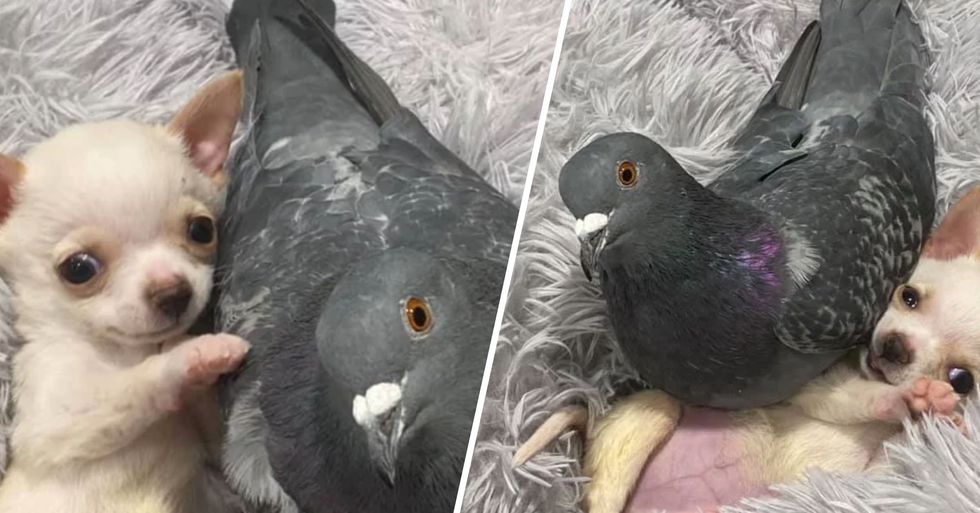 In the latest story in the world of animal news, a chihuahua and pigeon have struck up an unlikely friendship, and it is the most wholesome thing you will ever see. I promise.

To see the adorable friendship, and a selection of other unlikely animal relationships, keep scrolling...

There's nothing on this earth that's much purer than the love of our animals.

Well, apart from the love animals hold for each other.

Sometimes, different species of animals will strike up the most unlikely of friendships, and we are here for it all.

Animal friendships are so pure.

So, to kick things off in a suitable fashion, keep scrolling to see a selection of the cutest, and most unlikely animal friendships...

Tinni the dog and Sniffer the wild fox.

Anjana the chimpanzee and tiger cubs.

A chimp, dog and an elephant.

I am a huge fan of these two.

Champy the horse and Morris the cat.

Did you ever think you'd see a two-legged dog and an overly fluffy chicken taking a walk in the snow? It's one of life's simplest pleasures.

Stanley the sausage dog and Aayla the seal.

This incredibly wholesome encounter happened at the Cornish Seal Sanctuary in Cornwall, England.

Stanley and Aayla instantly hit it off.

Aayla is one of the sanctuary's friendliest rescue seals, and she frequently makes friends with the four-legged visitors. While visiting with his owner, Stanley struck up the unlikely friendship, and the pair spent around twenty-minutes checking each other out and posing for photographs.

Herman the Pigeon and Lundy the Chihuahua.

These 2 cuties found themselves forming a close friendship when they both ended up in the same dog bed, at The Mia Foundation.

Herman the bird arrived at the foundation several years ago.

He was found outside a car dealership, sitting motionless. Sue Rodgers, who founded The Mia Foundation in 2012, received a call about the Pigeon. She was able to nurse Herman back to health, but he never regained the ability to fly.

Due to Herman's condition, he is now a permanent resident.

Rogers regularly brings the bird outside, which is where Herman met Lundy. Lundy arrived at The Mia Foundation at just 4 weeks old. His owner was unable to care for the pup due to his special needs. Lundy showed signs of not being able to walk at an early age.

The two animals automatically gravitated towards each other.

Rogers said: “The way they interacted was so cute." Herman even displayed some maternal behaviour towards Lundy. The pictures of the pair bonding have reached over seven-thousand likes, and nine-thousand shares on Facebook.

Rogers is hoping to help the little pup get a forever home.

Rogers said: “He is only 17 ounces, so we will have to wait on the chair." Herman is a permanent resident, but hopefully, when Lundy is healthy enough, he will be able to go up for adoption. Rogers has dedicated her life to helping animals born with birth defects. She is a true hero.