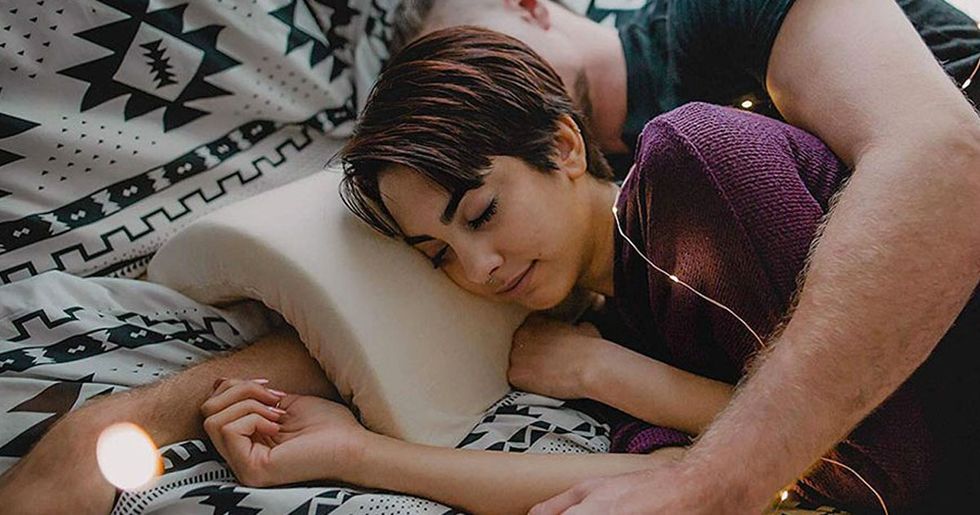 Pillow Stops People From Getting a Numb Arm When Spooning

As much as some of us might resist it, Valentine's Day is coming.

If you're out of ideas for a sweet gift for your significant other, take my genius advice. What does every single person on this planet love? Sleeping. So just get something sleep-related! Such as a pillow that stops your arm from getting numb.

Previous scientific research has found that cuddling has several benefits on all aspects of your health. Body, mind, and soul included.

But how can you reap the benefits of spooning if you lose all feeling in your "big spoon" arm? One couple had this exact issue and that's why they came up with The Coodle Pillow.

People seem to be keen to try out the new invention. Especially since you don't really need to have a partner to share it with. You can keep it all to yourself and just use it solo.

For some reason, there's always been this misconception that women like cuddling more than men.

In fact, Healthline says it's actually the vice versa: men are more into spooning and snuggling up than women.

Cuddling has many benefits.

It’s not just that it feels good, it actually has positive effects on your physical, psychological, and inter-personal well-being.

It leads to more intimacy and sexual satisfaction.

Healthline says that, according to a recent study, "couples who cuddled after sex reported higher sexual satisfaction and higher relationship satisfaction."

Oxytocin is known as the "cuddle hormone" because your brain releases it when you cuddle, which gives you a feeling of being loved and connected.

There's an external effect on your friendships too.

It strengthens bonds between you and your closest friends the more you cuddle.

Psychology Today example shows how this works in animals: "Oxytocin rewards a gazelle, for example, when it has the safety of a herd, and a baboon when it grooms the fur of a troop mate."

Cuddling even helps you communicate your emotions.

Healthline says that gratitude and sympathy between partners can be expressed just as effectively through touch as it can be with words.

One study found that touch even helps communication of emotions between strangers.

High blood pressure increases the risk of heart disease and stroke. Some previous research, according to Healthline, found that "short periods of hand holding and hugging" can help reduce "diastolic and systolic blood pressure."

Research suggests that "massage in the form of stroking, squeezing, and stretching" increase the level of dopamine and serotonin in the body, which are known as the "happiness hormones."

But dopamine also affects the pleasure center in your brain.

Finally, cuddling even helps reduce pain in some cases.

Therapeutic touch through "placing your hands on or near the body to balance energy" seems to help promote natural healing.

There are so many ways to cuddle.

Such as the butt “cheek-to-cheek", the “honeymoon hug", and the “leg hug," Healthline suggests.

But spooning is the classic one.

And the "big spoon" doesn't always have to be the taller, larger, or more dominant partner.

So cuddling is quite a treat to your body and soul.

But it's not as easy to find the most comfortable position right away without cutting off circulation to some part of your body.

The "big spoon" is the one to always deal with their arm getting numb after a few minutes of acting as a pillow for the "little spoon."

That's why one such couple, Bob and Shirley, created The Coodle Pillow.

And they have a relatable, yet romantic, story behind it.

"They didn't have much individually, but together they had each other and the inspirations that come with young love," their story begins on the pillow's official website.

"He was a creative young man with a college degree in industrial arts."

"He knew a lot about materials and working with his hands. He had plenty of ideas and inventive ways to make life easier."

"It was not a surprise to anyone when this enterprising young man came up with a new kind of pillow."

"The idea came to him after his girlfriend was lying on his arm while watching [TV]. "He cut foam and bent plastic in his oven until he came up with a tunnel shaped pillow."

He was also the one to come up with the name "Coodle" and acquire a patent from the United States Patent Office.

The Coodle Pillow started off as a side business for the couple, selling its product at the local swap market.

They used the money they made to get married in a simple ceremony.

"As life got busier with work and having children, the Coodle got put on hold. "Now years later, with grown kids and the explosion of the internet and social media, the one thing that brought them close (literally) in the 1st place is bringing this couple closer together again."

The pillow has an arched form which takes the weight off the "big spoon's" arm.

Their arm goes under the pillow and through the arch, which stays more comfortable for much longer.

The pillow is made of high-quality, U.S.-made foam.

That includes braces and covers. The parts are assembled in California.

As the name suggests, the pillow was made with couples in mind.

But you can use it just for yourself too, whether to watch TV, read, or just lie down and do nothing, like a normal person.

The website says it's also great to bring on camping trips.

One pillow costs $65, which isn't too expensive, but it's not particularly cheap either.

People seem to be excited about the new invention.

Most Twitter users left comments with their significant others tagged to show the solution to "all of their problems."

Mr. J said, "Hopefully the same crowd will release something that stops people from taking all of the bed too."

Paula Snelling, "I need this for just myself ?"

As great as the pillow is, it doesn't solve all of the problems that come up while spooning.

Such as hair getting everywhere, as Matt / Odin ☾ said: "What about hair all up in your face..."

Or that you need a person for it.

Rodger said, "Does it come with a girlfriend too? Or do you buy that separately? ??"