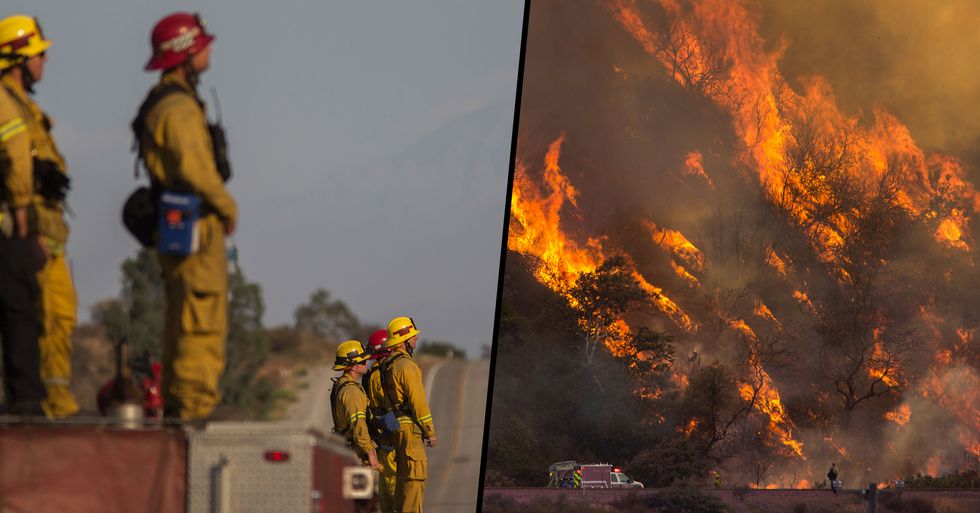 While pictures and videos of the raging wildfires in California continue to go viral, fatalities have emerged.

A pilot tasked with fighting the fire has died in a tragic crash...

And the weekend's events seem to have just topped the whole thing off.

On Saturday, August 15, there was a strange act of mother nature in California.

The rare phenomenon prompted a terrifying warning to be issued.

What of, you ask? A fire tornado.

The fires are believed to have ravaged approximately 124,000 acres.

Hundreds of firefighters have been assigned to fight the fire as it threatens thousands of homes and livestock.

It's the first time in history a warning has been issued like this.

And residents in nearby areas have been left petrified.

And it believed to have derived from a 20,000-acre wildfire in Northern California, that started on Aug. 14.

This is not your typical tornado, though...

Meteorologist Dawn Johnson told The New York Times. "‘It’s not like a typical tornado where it happens, everything clears out, and you safely go and investigate."

"In this case, there’s a massive wildfire burning in the same location, so the logistics are a lot more complicated."

So, what exactly does a fire tornado consist of?

Well, there are multiple components that must come together for fire tornadoes to form.

There must be a combination of unstable wind patterns, uneven terrain, and the intense heat from a fire.

On top of this, elements like gas being released from burning vegetation serve as fuel for the tornadoes as well.

On Saturday afternoon, the Weather Service issued a warning about a possible “fire-induced tornado" from the Loyalton Wildfire in parts of Lassen County.

For the first time in history, a tornado warning has been issued for a likely *fire tornado*. These are not "firew… https://t.co/gTTxHSR7JJ
— Matthew Cappucci (@Matthew Cappucci)1597529634.0

The wildfire “exploded most impressively" on Saturday “with a very large pyrocumulus and reports of fire tornadoes," the Weather Service said. “Due to the possibility of very strong fire-generated winds and extreme fire behavior with danger to fire personnel, a tornado warning was issued to heighten awareness in the area of the fire."

The wildfire believed to be the root cause was said to be 5 percent contained, according to the U.S. Forest Service.

Of course, it wasn't long before pictures and videos started emerging on social media.

@JosephBlanco1 It’s like we’re stuck at the beginning of a Dwayne Johnson movie and he hasn’t shown up yet to save us all.
— Chip Shoulder (@Chip Shoulder)1597620778.0

And to say they are terrifying is an understatement. 2020 really has put us all through the wringer, hasn't it?

Huge thank you to all the firefighters, Hot Shots and Forest Service men and women that saved our property and busi… https://t.co/kt0fMOKssV
— Danielle Peel (@Danielle Peel)1597600214.0

Over the last seventy-two hours, roughly 367 new fires have broken out.

Due to 10,849 lightning strikes reported statewide.

Sadly, there have been fatalities while the fire is being contained.

A helicopter has crashed while fighting the wildfires, which has added yet another blaze to those already raging.

According to reports, the chopper went down on Wednesday morning while trying to fight the blaze over Reno.

Another fire broke out due to the impact, destroying around 50 acres of land before it joined up with the main fire.

While the pilot is yet to be identified, he is said to have been the only one on board.

The helicopter was privately owned but contracted to help the government tackle the wildfire.

The National Transportation Safety Board is currently investigating the cause of the crash.

One 'Karen' from California has "erupted" after being told to wear a mask, keep scrolling for the full story...