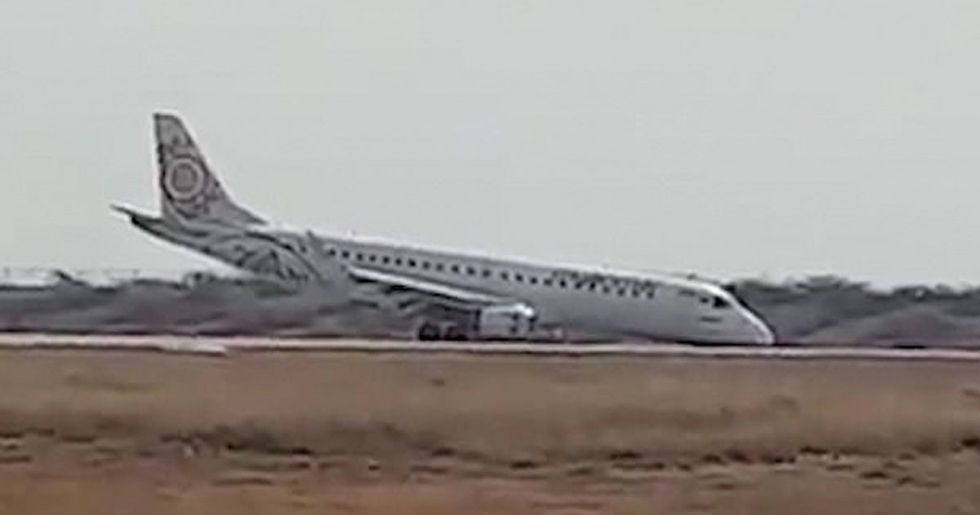 In just a couple of years, Myanmar has witnessed several emergency landings and crashes.

On Wednesday, a commercial plane slid off the runway at the Yangon airport, leaving eleven passengers injured.

In 2017, the country saw the deadliest plane crash in its history when a military aircraft crashed into the Andaman Sea, killing 122 passengers, including children.

Now there has been another one, just days since the Yangon accident.

On Sunday, a pilot from Myanmar was forced to make an emergency landing on the back landing gear when the front wheels failed to deploy.

The pilot tried several emergency procedures, including manually pulling out the front wheels, but nothing worked. Luckily, no one was injured and the landing was seriously impressive.

Scroll down to see the photos and videos of what was happening both outside and inside of the plane as it landed on its back wheels...

2 plane crashes happened in one week in Myanmar.

On Wednesday last week, one plane crash-landed and slid off the runway at the Yangon airport, Daily Mail reports.

The Biman Bangladesh Airlines flight had got caught in the storm.

It skidded off the runway when it was landing. The plane seemed to be broken in 2 places.

There were thirty-three people on board.

Eleven of them were injured, but, luckily, none of the injuries were life-threatening.

According to The Independent, a spokesperson of Biman Airlines has confirmed that the crash happened due to poor weather conditions.

The plane was operated by 2 pilots and 2 flight attendants.

One of the pilots was injured in the crash but, again, was not injured.

Yangon Airport closed after the crash.

Upcoming flights, both incoming and outbound, were either redirected or cancelled.

Some people who were at the airport managed to catch photos of the damage.

The body of the plane and the wings both suffered visible damage. But the Biman Airlines flight wasn't the first to suffer Myanmar's monsoon season.

The stormy weather has recently taken down a few other commercial and military flights.

In 2017, Global News reports, the country saw one of its deadliest crashes when a military plane crashed into the Andaman Sea.

One hundred and twenty-two people were on board and there were no survivors.

Among them were soldiers, their family members, and crew. Only twenty-nine bodies have been found in the sea.

Rescue workers were carrying the dead wrapped in plastic, during stormy weather in the small fishing village of Sanlan.

Many of the bodies were found in pieces and none were wearing life jackets.

After the crash, search parties found an aircraft wheel, 2 life jackets, and a few bags with clothes inside.

They confirmed that the plane was manned by a "seasoned pilot" with 3,162 flying hours, 2 co-pilots, and a flight engineer.

Bad weather was blamed for the crash.

Although it was the rainy season in Myanmar, aviation officials claimed the weather conditions and visibility had been normal when the plane took off.

A month later, the BBC shared more details about the accident.

Investigations revealed that the pilot had lost control of the plane when it entered a thick storm cloud.

"Ice had formed on the wings and sudden crosswinds had led the plane to stall."

"The accident occurred due to loss of control after experiencing adverse weather that caused the plane to stall... resulting in a nosedive," local news claimed.

The black box also confirmed that the crash was "not from any act of sabotage, explosion, or engine failure."

The only thing that investigators couldn't figure out was why the pilot decided to fly into the storm. Planes have weather radars that help avoid such clouds.

In 2016, there was another military plane crash.

An air force plane crashed in Nay Pyi Taw, killing all 5 of its crew members.

Then, a few months later, a helicopter with 3 officers inside crashed in central Myanmar.

In 2012, a commercial plane made an emergency landing, then burst into flames. 2 passengers sadly died. Now another emergency landing has befallen in Mandalay but everyone made it out safely.

According to Daily Mail, a commercial plane's front wheels failed during landing on Sunday.

The touchdown was "nail-biting," as you'll see in the videos below.

The Myanmar Airlines flight landed with no casualties at 9 am.

Mandalay is a popular destination for tourists coming to Myanmar.

When the front landing gear malfunctioned, the pilot tried a backup procedure to pull down the wheels but it was unsuccessful.

He then did 2 fly-bys past the air control tower to check visually if the wheels had come out. They hadn't.

Then he followed other emergency procedures and "dumped fuel to reduce the landing weight."

Once the plane landed, smoke started curling around passengers' feet as they rushed to the emergency exists.

When his attempts through the computer system failed, he then tried solving the problem manually.

Ye Htut Aung believed that it was a "technical fault," even though all planes are checked daily. "They tried hard twice by flying around twice and asked to check whether the nose wheel dropped or not," he said.

"So they had to land with the back wheels... The pilot could land it skillfully. There were no casualties."

Myanmar National Airlines' engineers arrived at the airport and checked the plane over.

One passenger, Soe Moe, said, "Smoke came out a little when we landed... All passengers are okay."

The pilot had managed to inform the control tower of the technical issue before attempting to land.

All thanks to the Engine Indicating and Crew Alerting System, which warned the pilot of a failure in the front landing gear.

Following the emergency landing, all flights at the airport were suspended. Only smaller aircrafts were allowed to resume their operations 2 hours later.

Larger aircrafts were expected to be allowed on the runways by late afternoon.

One of the witnesses at the airport managed to capture the landing and the moment that the plane's nose tipped over.

Meanwhile, a passenger on the plane filmed the rushed but orderly evacuation.

Once out of the plane, the passengers seemed calm. Some were even smiling!