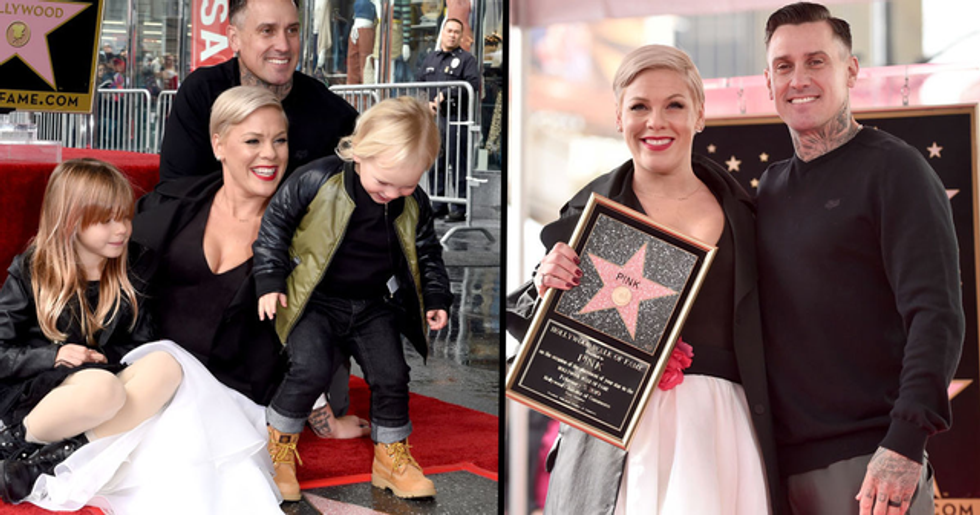 Pink Honored With a Star on Hollywood Walk of Fame

A star on the Hollywood Walk Of Fame is seen as the pinnacle of achievement by some. The biggest names in the entertainment industry of the past hundred years are immortalized in these five-pointed emblems of stardom along the sidewalks of Hollywood Boulevard. For visitors to Los Angeles, the Walk Of Fame is one of the most popular tourist attractions.

The latest celebrity to be honored by the Walk Of Fame? Bad-girl turned great-mom, pop singer Pink. The songstress (whose real name is Alecia Beth Moore) received her star on Tuesday afternoon - and she didn't celebrate alone.

Pink posed for her photographs alongside her long-time husband, motorcycle star Casey Hart, and her two adorable kids. Also in attendance was talk-show superstar, Ellen DeGeneres. Pink looked absolutely radiant and thrilled by the honor, although she joked with press that her kids were a little less enthusiastic about the ceremony.

She was born Alecia Beth Moore in Doylestown, Pennsylvania in 1979, making her thirty-nine years old.

Pink has had an impressively long career.

She first rose to fame in the girl-group Choice in 1995, when she was just sixteen. Record producers quickly saw her potential for solo stardom.

The album, titled Can't Take Me Home, was certified double-platinum in the US. It included two top-ten hits, "There You Go" and "Most Girls." Not bad for the tender age of twenty-one!

Pink has gone on to have massive career success.

Pink is known for her emotional vocals.

She often uses a slightly strained, husky tone to convey the feeling of her music. She's also known for being an amazingly energetic live performer.

Pink is also known for her outspoken nature.

She isn't one to sit quietly if she disagrees with something, as has been overtly critical of issues such as celebrity culture, misogyny, animal cruelty and homophobia.

The lyrics and accompanying video parodied the biggest celebrities of the age, including Lindsay Lohan, Jessica Simpson, and Paris Hilton.

Pink has a ton of massive hits.

She also has an amazing catalogue of karaoke-ready tracks.

Her big vocals on her ballads, such as "Try," "Don't Let Me Get Me," and "Just Like A Pill," make for perfect singing-along music.

Pink has also rocked some interesting looks over the years.

She first captured press attention as a result of her wild and wacky outfits, including her eponymous "pink" hair. This incredible style was for the 2004 MTV Video Music Awards, and certainly turned heads.

Pink has had a similarly prolific personal life.

She's shared a roller-coaster of a relationship with professional motor-cross racer, Carey Hart. The pair met in 2001, and became engaged in 2005, holding up a sign during a motor-cross race asking, "Will you marry me? I'm serious!" Pretty rock 'n' roll, if you ask us.

The course of true love never did run smooth, though.

The pair separated in 2008, which provided the inspiration for her hit single, "So What?" Hart actually appeared in the song's video. After seeking marriage counselling, the pair announced they were back together in 2010.

Her daughter, Willow Sage Hart, was born in 2011. Pink has been a vocal supporter of attachment parenting, and brought baby Willow along to the 2011 Happy Feet premiere. Cute!

Here she is with the now 7-year-old Willow at the 60th Annual Grammy Awards last month, looking absolutely glowing.

In December 2016, Pink welcomed her second child into the world.

Pink's second kid was a boy, who she named Jameson Moon Hart. Here they are together in 2019.

Pink and Hart are now happily back together.

And with two absolutely adorable kids, too, it seems Pink has found happiness and stability in her personal life.

Not to mention her professional successes.

It seems Pink's life was pretty much perfect.

An incredible career, marriage to her soulmate, and a beautiful family. Except for one thing. She was yet to be recognised by the Hollywood Walk of Fame!

Here's a quick bit of background.

The Hollywood Walk of Fame is a Los Angeles landmark. It's composed of more than 2,600 five pointed emblems of success embedded in the sidewalk of Hollywood Boulevard. Some of the first stars added to the Walk belonged to entertainment legends such as Walt Disney and Charlie Chaplin.

Pink can now count her name among these entertainment icons.

She received her star on February 5th, to honor her amazing achievements including her singing and her songwriting. She seemed totally thrilled.

Although she still retained her rock 'n' roll edge.

It's clear the enormity of the event wasn't lost on Pink. She told Entertainment Tonight, "I started looking down the list of the names... Julie Andrews, Lucille Ball. I'm next to The Rock and Jackie Chan. It's amazing!"

Pink was joined by her loved ones for the ceremony.

Here she is grinning as she gets a smooch from her husband. "To have my whole family here, it's incredible, it's such an honor," she gushed.

It's clear the star meant a lot to Pink.

Pink was joined by her two adorable kids, too.

Although she joked she thought the significance of the ceremony may have been lost on them. "I think they're terribly bored and they wanna go have pizza," Pink quipped.

DeGeneres actually gave a speech at the ceremony, which can be watched in full here. It's clear the pals are close, with DeGeneres saying, "Even though she is a huge international star, she is the most normal grounded person that you will ever meet."

The family took the opportunity to pose for some photos.

Pink was looking particularly beautiful, in a look reminiscent of old Hollywood glamour, complete with red lipstick and a leather jacket.

The reaction to the news was mostly very positive.

In fact, many members of the public were surprised (and confused) by the fact Pink hadn't received a star until now!

Although, as is always the case, there were some haters.

But we think it's totally well-deserved.

We hope she's celebrated this huge achievement in style - and knowing Pink, we have no doubts that she did just that!
20%

$39.98 $31.98
Buy Now
See More Deals
We hope you find these deals as awesome as we do! Just an FYI: we may receive a share of sales from links on this page