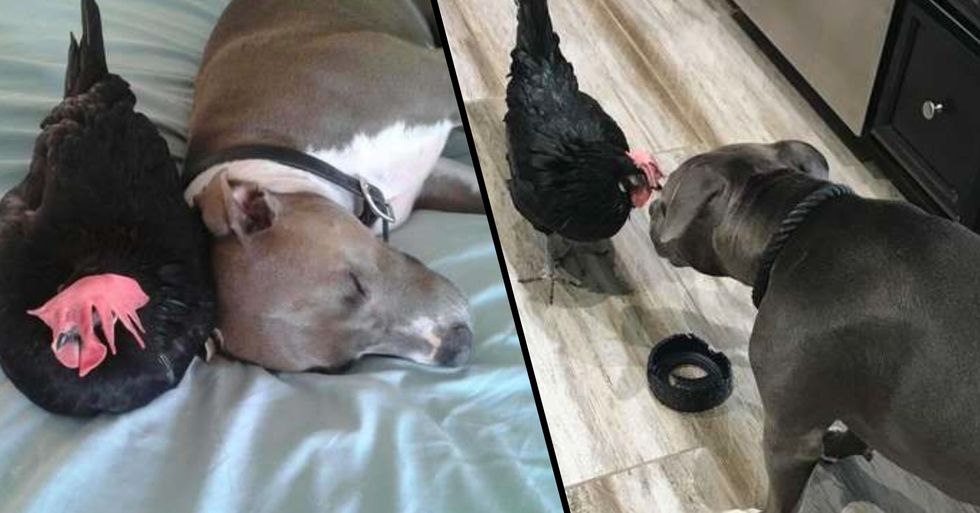 Nature is filled with incredible things and unlikely animal friendships is just one of them. Seeing a bunch of animals hanging out with other animals that you wouldn't expect them to is one of the weirdest and most wonderful combinations ever.

But there's one unlikely animal friendship that has been taking the internet by storm this week... a pit bull and a blind chicken.

Keep scrolling to see the adorable besties as well as a countdown of other unusual animal friendships to warm your heart...

1. Tinni the dog and Sniffer the wild fox.

2.Anjana the chimpanzee and tiger cubs.

And the tiger cubs seem to adore her too.

These besties make us gush with so much happiness.

4. Champy the horse and Morris the cat.

Champy loves to make friends with everyone.

"We live in NSW Australia," said their owner, "and have quite a few kangaroos on the property – Champy and Morris love to watch them."

Champy has tried to befriend a kangaroo but has not been successful.

But in the meantime, he has Morris to keep him company.

And apparently, they're affectionate with each other often.

Because he always slips off! So these outfits are a necessity. What an amazing friendship they have.

Did you ever think you'd see a two-legged dog and an overly fluffy chicken taking a walk in the snow? I's life's most simplest pleasures.

I'd give my heart for these 2.

And those are just the facts.

via: Wordpress / Rats Are Love

I know this isn't your typical friendship, but that's exactly what makes it more adorable! No? It's the rat, isn't it?

It doesn't matter what species you are, friendships can develop everywhere.

It sounds like someone told a very funny joke...

Pippin and Kate have given the internet an "unlikely love story."

The nature of the relationship is the cutest:

"Pippin, a helpless baby fawn was abandoned by her mother on the property of Isobel Springett. Isobel’s Great Dane, Kate, adopted Pippin immediately and they have been best friends ever since."

They have been best friends ever since they met.

And Isobel Springett manages to capture their friendship in the purest form.

14. Mabel the chicken and the puppies.

"After being saved from the pot due to a foot injury, Mable found a new wonder when she was moved into her owners’ home – puppies! For some reason, the year-old hen has taken to roosting on the puppies and keeping them warm!"

Look how cute this is!

"Hens, like all mothers, naturally want to protect, nurture, and care for babies. Since she doesn't have babies, but there are puppies around, she wants to mother the puppies, and by god, she's gonna mother them puppies."

15. A golden retriever and an abandoned kitten.

When Ichimi the kitten was rejected by her mother, Ponzu the golden retriever and his owner Jessiepon took her in and nursed her back to full health.

Ponzu previously had a heartbreak.

The sig's old bestie, Wasabi the kitten, died after a crow attack so Ichimi has been providing the pup with some TLC since then.

And now they have become inseparable.

The pair often plays together, and Ponzu even cleans and sleeps together with Ichimi. We love a happy ending to a story!

Just look at the smile on the goat's face!

17. Bubbles the African elephant and Bella the black labrador.

Bella loves jumping off of Bubbles.

And it makes for some incredible pictures!

“Bubbles was rescued in Africa after her parents were both killed by poachers. As Bubbles grew over the years, from 300-9000 pounds, so too did her love for swimming. In 2007, a contractor hired to build Bubbles a swimming pool, abandoned Bella as a puppy at The Preserve. The pool and eventually the river presented these two the opportunity to interact in a way that developed a deep and lasting friendship."

We have probably the greatest friendship I've ever seen: A lion, a tiger, and a bear.

They love to hang out in their little play-garden.

This loving relationship developed when the cat and fox came across each other on a landfill site.

And rather than fighting over territory...

They proceeded to play with each other.

The playful nature of their relationship really made this one heartwarming.

One final shot of the pair.

20. The sweetest friendship of them all?

It has to go to this adorable Pit Bull and blind chicken.

Peri the chicken was adopted by a family when she was just days old.

But 6 months into her life, she came down with a serious eye infection.

Sadly, her family were told she would lose her sight.

"We made adjustments to help her as she lost her sight: bowls on a throw rug that make noise, special low roosting bars, an ottoman in the living room to ‘watch’ TV with us in the evening and an extra-large ottoman in our room, next to our bed, for her bed," explained her owner, Christa Hubbard.  "We hired a chicken ‘nanny’ to help her out when we weren’t home."

"He was 3 years old and quickly took to helping her find her way. A seeing eye dog for a hen. These two spent the next eight years together. He would guide and protect her. They napped together, sunbathed together."

"Taj died in July 2018 after a long battle with cancer. Peri was lost without her buddy — she knew he was gone. Taj was so important in Peri's life, so the family began to adopt pit bull puppies.

Now, Peri is just as close to her sister, Gracie.

"Gracie will bring Peri a toy, place it in front of her and wait. When Peri is out in her yard doing chicken things, Gracie can be found laying outside the fence waiting for her (Peri has a fenced-in area as we have a pool). When Peri is on her ottoman ‘watching’ TV, Gracie brings her a toy. First thing in the morning when we get up, Gracie checks on her sleeping friend."

Taj and Peri were inseparable, but it seems that bond has carried through with Gracie too.