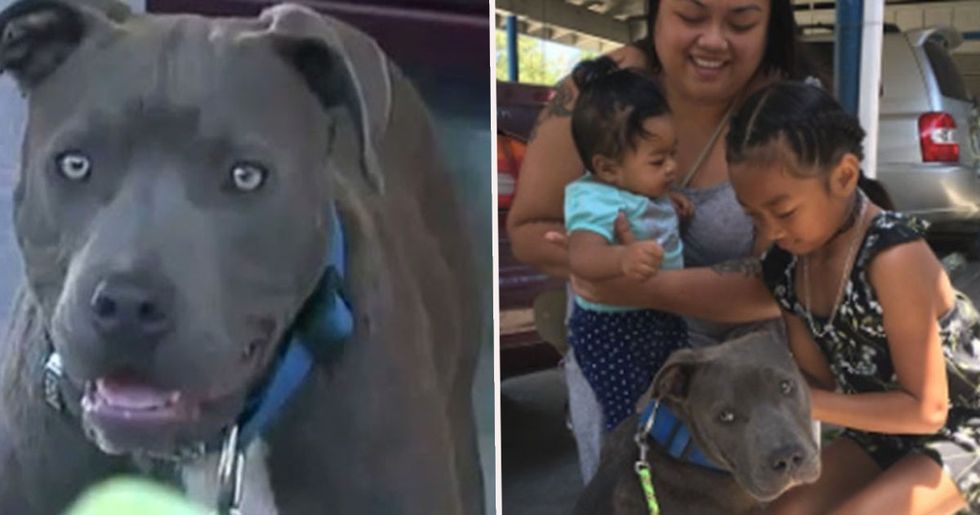 They're seen as a breed that are violent, hard to control, and a physical threat - especially to young children. The reputation of Pit Bulls is so poor that, as of the Dangerous Dogs Act 1991, the ownership and breeding of Pit Bulls were banned in the U.K.

This negative rep has spread across to our very country and, currently, owning a Pit Bull is illegal in ten states. So, if you live in Kentucky, Louisiana, Ohio, or any of the other seven states wherein dogs are not welcome, you are actually committing a criminal offense.

The question today is "would a criminal do this?" - and by "this," I mean "save a baby from a burning building."

Continue scrolling to read what happened...

But I guess that you could argue that even the most hardened criminals looked cute as babies but... I mean, you can't deny that these Pit Bull puppies are seriously cute.

Maybe it's more of the stereotypical Pit Bull owner that's the problem.

As opposed to the problem being the breed itself, the fact that Pit Bulls have such a bad rep could be down to those that typically own them. Clearly, they are an obedient and loyal breed, but if they are bred to do bad things, can you really blame the dog?

Tough on the outside, great big softies on the inside.

Pit Bulls are considered to be a danger to children.

But, as this Instagram post proves, that's not always the case. Amber Skye's Pit Bull is her son's best friend.

This Pit Bull is casually playing fetch with a toddler and appears to be no threat whatsoever. If anything, the Pit Bull looks incredibly obedient. If you try to play fetch with my parent's scrappy miniature Jack Russell, you'll spend an hour trying to wrestle the ball from her mouth.

Can your pooch surf?

This Pit Bull sure can! I kid you not, this post is not some photoshop wizardry, this dog is actually balancing on the surfboard. Apparently "surf dog" is a thing and I think that we should all be getting on board with it.

Not all Pit Bulls are fighters...

Two babies and a Pit Bull?

Honestly, I've actually been brought up with a slight fear of Pit Bulls. I guess that stories of the dogs biting kids' faces and such made me stereotype the entire breed. Seeing this Instagram post of two babies calmly playing whilst their pet Pit Bull watches is like nothing like the kind of thing that the media portrays these pups as doing. The dog isn't even stealing the baby's toys to chew on. Amazing.

Not everyone feels so calm around Pit Bulls though.

This Twitter user expresses that her sister was attacked by a Pit Bull and had her cheek ripped off. Obviously, this was a totally horrific event would likely make you fear the breed for life.

But this Pit Bull only seems interested in biting this watermelon...

I personally think that it really is down to the owners and how the dog is trained.

There's one Pitbull whose heroic status cannot be disputed.

Nana Chaichanhda, of Stockton, California, had no idea that her eight-month-old pet Pit Bull, Sasha, had such a heroic streak.

That is until one fateful night...

Unbeknownst to Ms. Chaichanhda, a fire had broken out in a neighboring apartment.

The entire Chaichanhda household was tucked up in bed.

Including Nana's seventh-month-old girl, who was in a separate room from her parents.

Nana woke up to the sound of Sasha barking.

She had never heard her dog bark so loud and instinctively knew that something must be wrong.

She left her bedroom to go and see what was wrong with Sasha.

It was then that she realized that the apartment had caught fire.

But the heroic Pit Bull, Sasha, was already there.

She had managed to jump into the cot.

Using her teeth, the pooch had got hold of the baby's diaper and was tugging it to safety.

At the first sign of a fire, Sasha had not run away to save her own life.

Her instinct was to save her family.

Nana grabbed the baby and the pooch and got them out of the apartment.

Thankfully, no casualties occurred and everyone got out of the blazing building safely.

If it wasn't for Sasha alerting Nana to the fire, who knows what could have happened?

So much for Pit Bulls being a danger... in the case of Sasha, that quite simply isn't the case at all. The family are now residing with Nana's aunt and, as for Sasha, I'm sure that everyone's glad that she's around. Up for some more heartwarming Pit Bull content? X-Men's Patrick Stewart fostered a Pit Bull pup and he's in love with him. Keep scrolling for supreme cuteness.