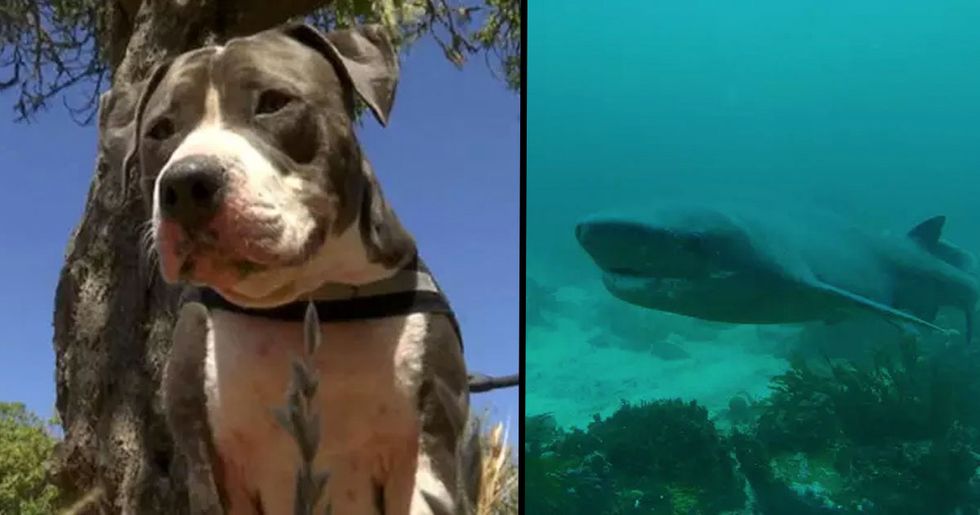 Pit Bull Fights off 6-Foot Shark to Save His Owner

Dogs have also been to put their lives on the line for us humans, and some such stories are pretty incredible. Keep scrolling to learn about the most heroic pooch and what he did to help save his owner from the jaws of a shark...

Especially when it comes to children, dogs are known to be protective and will put their lives on the line in order to protect "their human." Back in 2007, a Doberman-pinscher saved the life of a seventeen-month-old baby from a venomous snake by pushing the child out of the way and taking the snake bite himself. Luckily, he was injected with anti-venom and lived to tell the tale of his life-saving actions.

A woman's life was saved when her very own dog stopped her from choking...

She began choking on an apple when her Golden Retriever jumped up and down on her chest until the apple was dislodged and flew out according to the American Society for the Prevention of Cruelty to Animals, who awarded the dog with a commendable mention.

So what about when it comes to sharks...

James White, a fisherman from California, was recently enjoying a relaxing day at Bodega Bay in Sonoma County with his faithful Pit Bull, Darby.

He got a pretty big nibble on his line...

After spending around 10 minutes battling with the fishing line, James reeled in a 180cm long sevengill shark.

This breed of shark is common in California...

The sevengill shark is known for (obviously) having 7 breathing gills rather than the standard 5 that most breeds of shark have. They aren't usually associated with shark attacks, but they have rows of small, but extremely sharp teeth, that can deliver a pretty nasty bite.

James unveiled the shark on his fishing rod...

He went to unhook the shark, but the fish was putting up a hefty fight by twisting and thrashing all over the place.

When the shark fell to the ground after being released from the rod, it gave one last fight...

The shark sunk its teeth into James' foot and simply would not let go. Speaking to NBC, James said: "Immediately there was blood everywhere, the first bite punctured an artery."

Time was of the essence...

"The pressure was intense," he went on to say. James began yelling to nearby fishermen for help, but they were a couple of hundred of meters away and he was losing blood at an alarming rate with the shark's teeth still firmly sunk into his foot.

Darby was in the car when the commotion kicked off...

After hearing his owner's cries for help, Darby lept out of the gap in the window and heroically came to James' aid.

Without thinking, Darby sank his teeth into the sharks' gills...

"And I told him, 'No back off' and then [Darby] repositioned and grabbed it by the tail," James explained. "He literally ran up the hill with it and pulled it off my leg."

After been bitten by Darby, the shark eventually released James' leg from its ferocious grasp.

"If it wasn't for him I would have been a lot worse... he's been a part of the family from day one. Just now a little more," James added.

Pit Bulls are often assumed to be aggressive and unsuitable family pets, but it seems as though the Pit Bull is actually one of the most gentle and loyal companions that a person can have as a pet.

Take the story of Chief the Pit Bull, for example. Back in 2007 in the Philippines, Chief ran to the aid of his terrified owners who were being cornered by a cobra snake. Cheif took a bite from the snake when shielding his owner which sadly resulted his death.

Lilly the Pit Bull pulled her owner out of the way of a moving train...

In Massachusetts, 2012, Lilly's owner collapsed while walking along train tracks. The driver of the train recalls seeing Lilly desperately pulling her owner off the tracks. This saved her owners' life, but Lilly was ultimately hit by the train. Luckily, after many operations, Lilly survived, but only with 3 of her limbs intact.

Watch James' interview with NBC here and hear his account of Darby's heroic actions... Now if these stories don't prove that Pit Bulls are gentle, loyal and faithful companions, I really don't know what will. Well, actually, maybe I do. Did you hear about the Pit Bull who saved a baby from a burning house? Keep reading if you need more convincing that Pit Bulls are as loving as they are adorable.