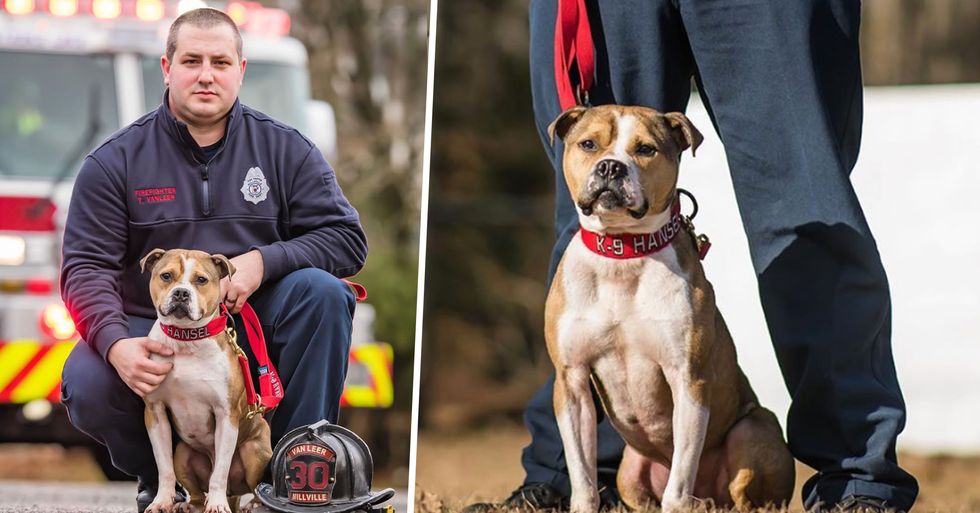 But there's one rescue dog who has been stealing the spotlight this week, after becoming the first arson-detection K9 in the US.

Keep scrolling to take a look at this incredible pooch and read his in the inspiring story...

And there's one breed that tends to fill up these shelters...

There's a huge stigma attached to Pit bulls that they are dangerous and aggressive.

Which often lands them in the pound - with no one wanting them.

But there's one rescued pit bull who has been making headlines this week.

Hansel was rescued from a Canadian dog-fighting ring by Ontario Society for the Prevention of Cruelty to Animals (OSPCA) back in 2015, and has been given a second chance at life. Keep scrolling to take a look at him...

After being rescued, the sweet doggo was put through a rehabilitation and training program by the Philadelphia non-profit, Throw Away Dogs.

And now, Hansel has become a critical part of the team at the Millville Fire Department in New Jersey.

Firefighter Tyler Van Leer was the person who first came up with the idea of adding an arson K-9 unit.

Hansel has now made history as the first Arson-Detection K9 in the entire US.

Hansel's mother was one of over thirty pit bulls rescued from the ring. The OSPCA then filed a petition to have some of the dogs euthanized as they feared they wouldn't be able to live in normal homes, as per The Epoch Times.

Thankfully, Hansel’s mother and the others were spared thanks to a social media campaign named #Savethe21.

Amazingly, Hansel is adjusting well to his new life. “Whenever I ask him, ‘Are you ready to go to work?’ and bring out the harness, he starts doing laps around the crate," the firefighter told CNN. “Everyone here are at the firehouse loves him. He is just an awesome dog," he added. It's amazing to see a pit bull quashing the harmful stereotypes of the breed. Want more dog news? Keep scrolling to learn more about a woman who returned from vacation with a stray dog.