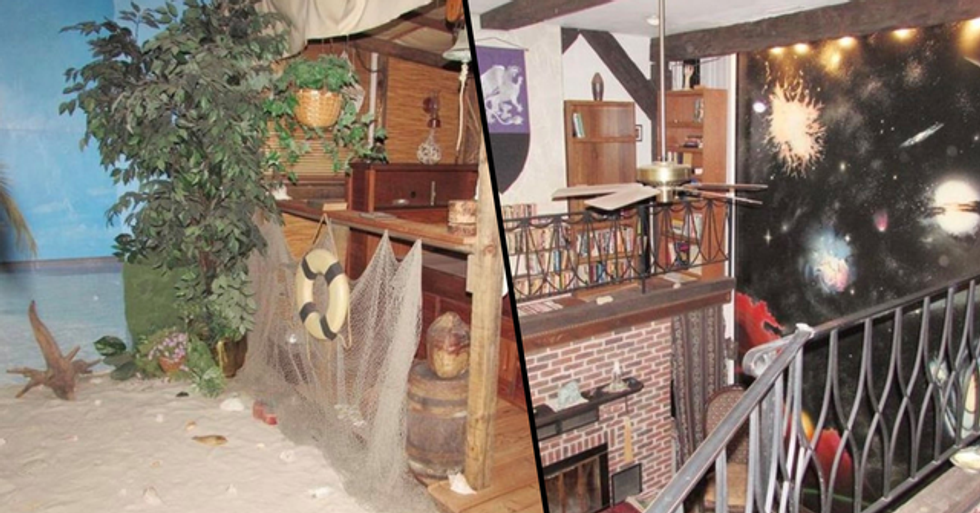 A seemingly normal looking house for sale in Pittsburgh has gone viral for its completely insane interior... And I've never wanted to live anywhere so badly in my life.

Keep scrolling to see the whacky listing for yourself...

In the latest installment of strange things to happen in 2020...

A small house just outside of Pittsburgh has gained viral fame for its wonderfully bonkers interior design.

And the best part about it all?

From the outside, the 3 bedroom home looks like any regular suburban house.

But, within its 4 walls, something magical awaits.

All I can say is, whoever decorated this house is a (slightly crazy) interior wizard.

This Twitter user first alerted us all to the weird and wonderful Pittsburgh listing...

"I just discovered the greatest house listing of all time. It starts out very unassuming and modest." Keep scrolling to see some of the more bizarre rooms from the whacky home...

To kick off the festivities, let's take a look at the back yard.

A little surprising, but nothing too extreme, right?

But things escalate once you move indoors.

Admittedly, the loud and brash interior is not what any of us were expecting.

The fur throw, the renaissance painting...

Someone had a dream, and they made it happen.

And let's just talk about that wall art for a second.

Whoever decided to dedicate a full wall to the solar system deserves a medal for their sheer bravery.

And then we move into the dining area...

Or is it a futuristic games room? No one can tell.

I am fascinated by this set up.

So many questions need to be answered.

But from this angle, this room begins to resemble the cockpit of an aircraft...

With a giant TV plonked in the middle.

And, for some reason unbeknown to me...

The listing photographer decided to include a picture of these guys. Do they come with the house? And, believe it or not, it gets even weirder...

The bathroom has been transformed into a makeshift jungle.

I just don't know where to look.

Imagine using the toilet in this tropical paradise?

It would be an experience, that's for sure.

Only one of the 3 bedrooms is shown in the listing...

And what we get is a major 1970s throwback, magazines and bong included.

And, just when you thought things couldn't get any more bizarre, there is a beach room.

Yes, a room in the house has been transformed into a beach.

I wish I was joking.

Sand and seashells have been scattered along the floor alongside an assortment of exotic(ish) plants.

I mean, I'd love this if it had been pulled off well.

I'm no interior designer, but this is simply dreadful.

Since the listing went live, people have been losing their minds over the cooky house.

And it turns out, despite the craziness, most people are loving the decor.

It is every imaginative child's dream house...

But some people are a little spooked...

@frazierapproves I would like to know (approximately) how many people have been murdered in this house?
— Meech (@Meech)1589821910.0

Surely, whoever had the thought to decorate a house in such a manner is a murderous psychopath?

And, in a twist even more strange than the house...

@thomas_overton @frazierapproves hi! this is actually my grandfathers house! this was his office where he did some… https://t.co/HMpexVVXDe
— Sydney Charrie (@Sydney Charrie)1589831151.0

Several Twitter users have come forward claiming that this house is infact their grandfather's house. One question... Why?

But let's take a moment to recognize the valiant efforts of whoever had to write up the listing.

"Time Travel at Warp Speed to the 25th Century Starship. A Talking Space Alien greets you as you walk toward the Floor to Ceiling, Outer Space Wall Mural. The Dining Rm Command Center Rear Wall opens up to the Spaceship Main Bridge-Working Computer & Controls from an Apache Helicopter..." As a writer, I am inspired.

You can take a look at the bizarre listing for yourself here.

But, remarkably, there are even stranger interior design blunders out there...

And there's an Instagram page dedicated to showcasing all of them. Keep scrolling to see the worst ones for yourself...