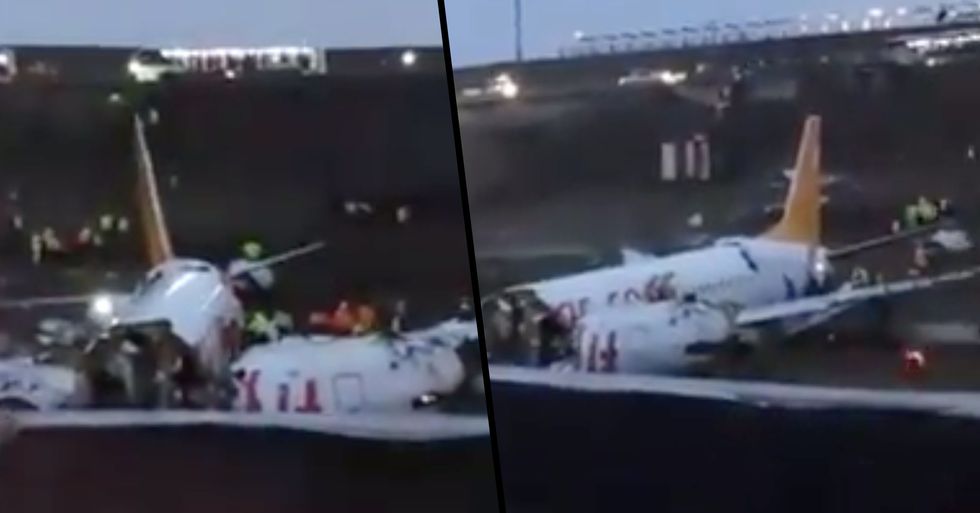 It's unimaginable how truly terrifying a plane crash must be and the mere thought of is utterly nightmare-inducing. Sadly, that fear has become a reality for passengers on board a flight that skidded off the runway and burst into flames today.

Reports have just come in that a plane has crashed in Turkey.

The passengers jet, which was carrying 177 people, skidded off the runway today at Istanbul's Sabiha Gokcen airport.

The Pegasus Airline Boeing 737 burst into flames after reportedly crashing into a nearby road.

Amongst the wreckage, reports have stated that the aircraft looks to have broken in half.

Even more terrifyingly so...

As new photos emerge, the fuselage appears to have broken in 3 different places.

And attempted to save the passengers on board.

Crew were seen flashing torches into the wreckage...

Seemingly looking for any trapped passengers.

And shortly after, Pegasus Airlines confirmed the crash had happened.

The Turkish transportation ministry said that the crash was a result of a "rough landing."

According to Cirium, there were 6 crew members on board as well.

Reportedly, there was a thunderstorm passing at the time of the crash.

There have been several injuries reported.

But, remarkably, The Turkish transportation ministry confirmed there have been no fatalties. In fact, many of the terrified passengers were caught on the footage.

All passengers were evacuated from the aircraft.

And the fire was quickly extinguished by emergency services.

Officials say that fifty-two people are currently in hospital as a result of the crash.

BREAKING 52 injured in Pegasus #PC2193 crash confirmed by the governor and at least one passenger is being extracte… https://t.co/PSRZyeQodd
— Carlos Conceicao ツ (@Carlos Conceicao ツ)1580922321.0

Reports say that many of the passengers were evacuated through the gaps in the fuselage before being taken to hospital.

Live footage at the scene shows the inside of the cabin, with seats hanging out.

It's a truly awful sight.

The airport has been shut down following the incident.

With all flights being diverted to another airport.

It's truly unbelievable how anyone managed to survive this.

We await more details on the official cause of the crash.

As of yet, Pegasus Airlines have not issued a statement on the incident. Stay tuned for more on this developing story.