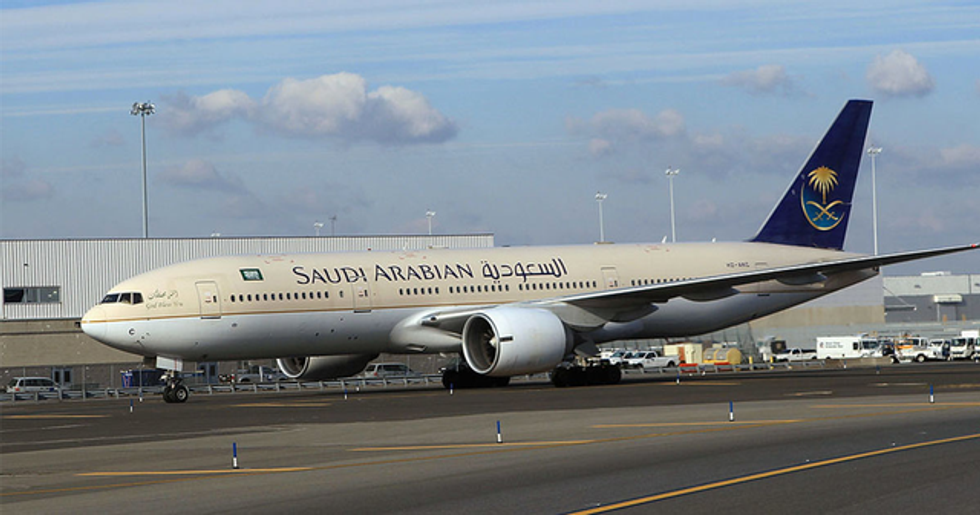 Plane Forced to Turn Around After 'Mom Leaves Baby at Airport'

There's no denying that traveling can be stressful. There's so much to remember, from you passport and tickets to your holiday essentials. But one thing that it seems unlikely that you'd be able to forget? An actual human being.

But for one Mom flying to Malaysia, this anxiety ridden nightmare became a reality. She's boarded the plane, watched the safety video and likely picked out a movie to watch, all before she realized she was missing something rather important. Her baby.

She alerted staff, who were bemused but offered immediate help, and managed to turn the plane around to allow the mother to retrieve what she'd lost. The story has a happy ending, as the two were reunited and apparently none the worse for their time apart. A video of the bizarre incident has been shared online, and pretty much everyone has had the same reaction: "how?!"

For many, travel represents a stressful experience.

Even for the lucky few who don't suffer travel-related anxiety, it's unlikely to be what could be described as a "fun" experience.

But when you add anxiety into the mix?

Oh, boy. It turns tho whole thing from an annoyance to a nightmare. One of the primary things that make traveling so worrisome is how many different things could end up going wrong.

Plus, a lot of the onus ends up on you.

There's so much to remember when undertaking a longer trip. It can often feel like you're holding too much information in an overflowing brain, and that something is bound to fall out.

There's a lot to remember.

From passports and boarding passes, to cash and a phone, to chargers, visas, then all of your actual, personal essentials - it makes our heads hurt just thinking about it!

But there's one thing it seems unlikely you'd forget.

How about a tiny human being that you'd grown inside your body? It might just be us, but it seems like that would be something you wouldn't have to try too hard to remember.

The idea of remembering something just a second too late is pretty horrible.

That instant, stomach drop of realization is really no fun at all - and usually means you have a big mess to sort out.

It's even worse when your mistake effects others.

There's nothing more embarrassing than creating an obstacle for a whole group of people, many of whom are strangers, thanks to your own forgetfulness.

But this anxious nightmare became a reality for one woman.

A flight had just taken off from an airport in Saudi Arabia, when a passenger on board made a shocking (and potentially rather humiliating) admission.

The plane was en route to Kuala Lumpur.

But shortly after takeoff, the plane made a request to turn around and return to the Saudi airport it had just left behind. The reason? A passenger had forgotten something rather essential.

The woman hadn't been on board too long before she realized.

Passport, check. Ticket, check. Baby ... oh no. Yes, that's right. The woman had managed to accidentally leave her baby behind at the airport.

The woman (unsurprisingly) made the realization quite quickly.

Very soon after the plane had taken off, she alerted the cabin crew as to the fact she was missing a rather important personal belonging.

The cabin crew then alerted the pilot.

There was then a call made back to air traffic control, in which the confused staff informed them about the rather strange situation that had occurred on board.

They asked for permission to change their route.

After explaining that there was a missing baby on the flight, the pilot asks air traffic control for permission to turn the plane around. "May God be with us. Can we come back?" he asks.

It's clear there was a lot of confusion on board.

There are overlapping voices heard in the call, and the air traffic control team seem totally unsure about what to do - suggesting that this type of problem may be a first for them.

In spite of the inconvenience, it seems everyone is keen to return to the airport.

The pilot is heard talking to a coworker, saying, "this flight is requesting to come back. A passenger forgot her baby in the waiting area, the poor thing."

It's hard to imagine how this scenario played out.

Leaving behind a wallet or phone is one thing - but you'd think a baby would be pretty hard to forget about, right?

It seems the mother was pretty insistent about the need to return.

"I told you, a passenger has left her baby in the terminal and she is refusing to continue the flight," explains the pilot. Unsurprising, really - although perhaps quite odd considering she had left the baby there in the first place.

Apparently this type of request is so unusual that air traffic control staff thought it ought to be captured for posterity. The clip was shared on YouTube.

Luckily, the staff were pretty obliging.

Although there's no doubt they were also a little bemused by the request. "OK, head back to the gate. This is totally a new one for us," they are heard saying.

The plane was then diverted back to its original airport.

This is actually quite a rare thing - usually planes will only turn around for life-or-death, health-related issues.

It seems this particular story has a happy ending.

The plane did turn around, in spite of the fault lying primarily with the forgetful mother. The pair were reunited at the airport terminal - though we don't know what happened next.

The other passengers just had to suck it up.

While it was undoubtedly frustrating that their trip was interrupted, there's no way they could have left an abandoned baby behind in good conscience.

Some have likened the story to a popular movie.

In Home Alone, Kevin's parents are so busy trying to remember everything they need for their trip that they manage to leave one pretty big essential behind.

Mirroring this story, the mother realizes while on the flight.

While seated on board, Kevin's mother connects the dots to the fact her child isn't there, but it's all too late. However, in Home Alone, the flight is not disrupted by the parents' forgetfulness - and Kevin turned out just fine!

In this GIF of Barack Obama, though, it looks more like he's forgotten his keys or wallet, rather than a living and breathing human.

Some have speculated on how exactly the mother managed to forget her child.

One of the top comments on the YouTube video reads, "Possible she was busy in whats app or Instagram." Another offers, "Saudi's kids are usually taken care by maids ... they are busy in cell phone."

Some are making jokes on the topic.

A sure-fire way to avoid forgetting something at the airport is to check it in with your bag. We're just not sure how well that would work for a baby.

It's not the first time a mother has forgotten their baby.

This video of Kim Kardashian striding out past the paps, only to sheepishly make a turn to collect her child, has been shared in comparison to this story.

Many have drawn attention to the other passengers.

While missing a (likely crying) baby on board may have initially seemed to be a good thing, the huge time delay caused by the mistake was likely extremely irritating for the others on board this flight.

But we're glad the story has a happy ending.

After all, it's hardly the baby's fault they ended up stranded at an airport - and it's only right that the mother was able to rectify her error. Let's just cross our fingers that it doesn't happen again!