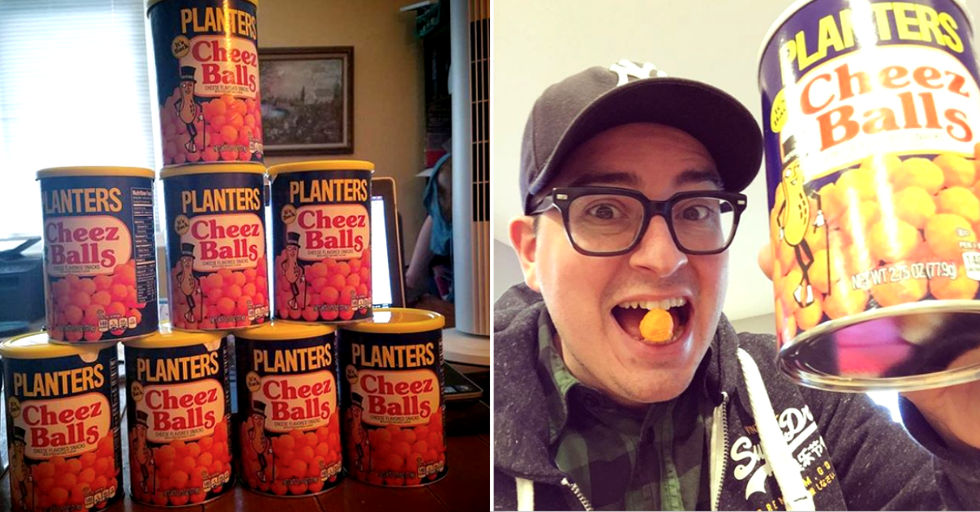 Who remembers Planters Cheez Balls? Oh, that's right. Every '90s kid. I remember coming home from school, digging my hand around in that cannister and delightedly jamming as many of them into my mouth at once as possible.

Then, tragically, in the early 2000s, these delicious bright orange snacks simply disappeared from shelves. Sure, there are Cheetos, and Pirate's Booty and other various off-brand cheese puff snacks, but none of them have that specific taste, texture, and crunch of a Planters Cheez Ball.

But our prayers have been answered, folks. Planters heard our pleas and they're bringing Cheez Balls back. All I can say is thank goodness.

You remember the canister, right?

Classic. Understated. A pillar of cheesy elegance. The pinnacle of after-school snacks. The kind of treat the granola-loving moms hated.

Since Planters pulled our cheesy treats off the shelves in the 2000s, there have been numerous petitions to get them back. Even Facebook groups and public declarations of cheesy adoration.

Look how freaking happy this guy is!

And now that they can, people are stocking up.

We honestly love that Planters understands what a nostalgia play this is. Their website reads, "You asked; we answered. Cheez Balls are back and just as amazing as you remember. If your life isn’t covered in orange cheesy dust, you’re missing out. Go get that one-of-a-kind delicious, orange cheezy taste today." The canister is described as a "resealable canister so you can pretend like you aren’t going to open it again 2 seconds later." Kinda feels like they're taunting us, but I'm not mad. So what about other nostalgic treats from days past?

I love Oreos. But I can't eat Double-Stuf. They're so gross. Too much filling. So these would absolutely ruin me. Regular Oreos and Oreo Thins got the ratio right, and we should stop now. Share this with your foodie friends!