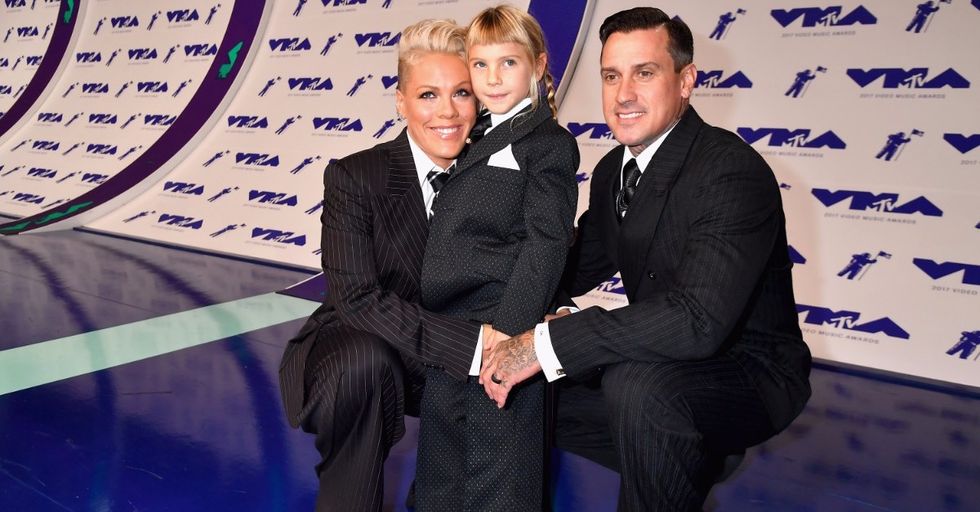 In a recent interview, P!nk opened up about how she doesn't want her children limited by typical gender roles and attitudes. Considering the "Beautiful Trauma" singer's own gender-fluid style, unabashed badassery, and unapologetic individuality, it's hard to imagine her kids feeling limited at all.

It's this type of intentional parenting that will shape the next generation's attitudes about sexuality and gender identity.

The multi-Grammy-Award-winning artist has never fit the mold of a typical American pop star.

P!nk's style ranges from rocker chic, to ultra-feminine, to androgynous. Her highly cultivated looks are part of the package, like most other performers, but not in the typical way. She's not trying to be a pretty girl.

While she does sometimes go for feminine frocks, her image has never been about that.

P!nk is unapologetically unique, weird, even. Her image, her raw and honest lyrics, and her willingness to say what she thinks even if it's not going to be well received have set P!nk apart from the crowd. It's what's so compelling about her. "I think ultimately whether people agree with me or not, they can never say that I’ve been inauthentic. I’m OK with that because that’s more important to me," she explained in an interview with The Guardian in October of this year.

P!nk is in the news again, and it's not because of a new album or her sometimes death-defying, athletic onstage antics.

Questions about her sexuality have followed her since her teenage years. She's always refused to answer in any definitive way. She dislikes labels, and although she's now married with children she describes herself as a "mixed bag" in terms of sexuality. She'd like the subject to be dropped.

Androgyny and gender fluidity have long been part of P!nk's persona, and her latest video celebrates that.

Featuring Channing Tatum in drag, P!nk shifts comfortably from 1950s-style feminine to full on masculine suit and persona. Her celebration of androgyny and individual sexual freedom is not an act. It is a deeply rooted part of who she is, and it extends to her family and parenting.

In a recent interview with Mirror, P!nk explained that she is raising her two children, Willow (6) and Jameson (11 months), in a gender-neutral environment.

“We are a very label-less household," she explained. "Last week Willow told me she is going to marry an African woman. I was like: ‘Great, can you teach me how to make African food?’ And she’s like, ‘Sure mama, and we are going to live with you while our house is getting ready.’"

She doesn't want her kids to be limited by cis-heteronormative gender roles and attitudes.

“I was in a school and the bathroom outside the kindergarten said: ‘Gender Neutral — anybody’, and it was a drawing of many different shapes. I took a picture of it and I wrote: ‘Progress.’ I thought that was awesome. I love that kids are having this conversation."

As she accepted an award at the 2017 VMAs, P!nk used the platform to tell a story about when her daughter said she was the ugliest girl in school. In response, the music star made a PowerPoint presentation for her daughter, as one does.

"And in that presentation were androgynous rockstars and artists that live their truth, are probably made fun of every day of their life, and carry on, wave their flag and inspire the rest of us. And these are artists like Michael Jackson and David Bowie and Freddie Mercury and Annie Lennox and Prince and Janis Joplin and George Michael, Elton John, so many artists — her eyes glazed over." "But then I said, ‘You know, I really want to know why you feel this way about yourself.’ And she said, ‘Well I look like a boy...’"

"And I was like, ‘Well, thanks. But when people make fun of me, that’s what they use. They say I look like a boy or I’m too masculine or I have too many opinions, my body is too strong.’"

"We take the gravel and the shell and we make a pearl. And we help other people to change so they can see more kinds of beauty.’" Damn. P!nk is undeniably a badass in every way, and her kids have an incredibly strong role model as they grow up into whoever they are. They can feel confident that their mom will support and accept them all along the way.