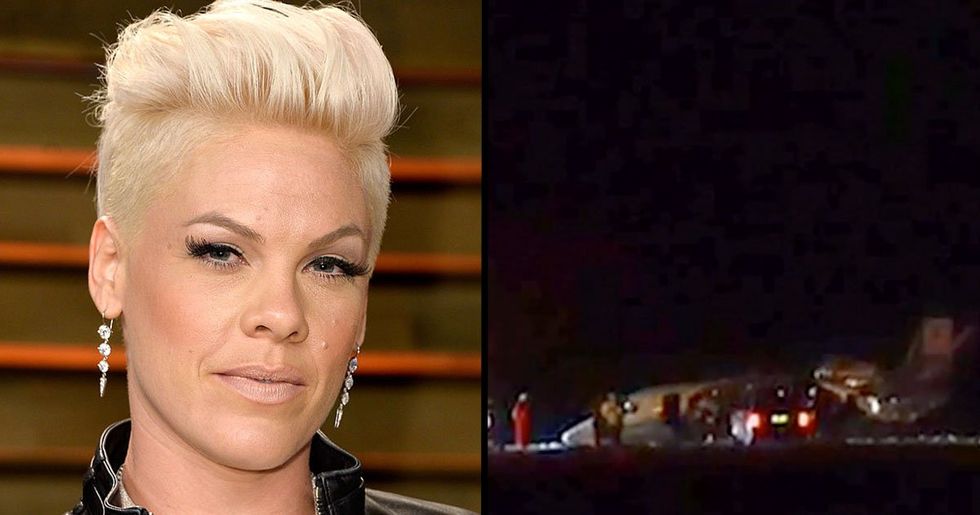 There seems to be no stopping singing sensation, P!nk. After catapulting to fame as one of the faces of  '00s music, the star has gone from strength to strength.

After making her comeback with the 2017 single "What About Us" - the first single from her 7th studio album "Beautiful Trauma" - she's remained in the singing spotlight.

And, since last year, the star has been embarking on her "Beautiful Trauma" world tour, which she is currently towards the end of the European leg of.

But, while her management team was flying from her Oslo show on Tuesday, the unimaginable happened... the plane crash-landed in Denmark.

Keep scrolling to see the full extent of the horrific crash.

P!nk rose to superstardom as a co-vocalist on "Lady Marmalade."

The pop powerhouse, whose real name is Alecia Beth Moore, featured on the iconic song from the 2001 Moulin Rouge! soundtrack alongside Christina Aguilera, Mya, and Lil' Kim, and has been shaking up the industry ever since.

Some argue that she's paved the way for artists like Lady Gaga and Katy Perry.

Known for her stand-out tomboy style and unapologetic individuality, many claim that she's allowed other unique artists to shine - and has received little recognition for doing so.

Since her "Lady Marmalade" fame, the edgy star dominated the '00s with hit after hit.

Tracks such as "Stupid Girls," "Trouble," and "Raise Your Glass" all went down pretty well with fans and critics.

But she's also tried her hand in acting and writing.

The star wrote songs for Cher's album, Closer to the Truth, and for Celine Dion, too. She then explored the realm of acting, where, in 2013, she gained critical praise for her role opposite Mark Ruffalo and Gwyneth Paltrow in Thanks for Sharing.

And her private life was evolving, too.

In 2006, she married her boyfriend, Motocross star, Carey Hart, in Costa Rica, after proposing to him during one of his races. But the pair got off to a rocky start - separating after just 2 years, before getting back together in 2010. The pair then welcomed their daughter, Willow Sage, in June 2011 and, in December 2016, their son, Jameson Moon.

As you can imagine, all went a little quiet on the music side.

The star released her 2012 album,  The Truth About Love, which soared in the charts, but took a step back for a few years. And we don't blame her, after all, she has 2 kids now.

The star released the track "What About Us" - the first single from her 7th studio album "Beautiful Trauma." Despite her brief hiatus, the song was an instant hit with fans.

There's been no stopping the star since.

From Grammy performances and smash hits to singing the national anthem at the Super Bowl LII, the star has definitely kept herself busy.

So, naturally, she's embarking on a huge world tour.

Shortly after the release of her comeback album, the pop powerhouse announced her "Beautiful Trauma" world tour, consisting of over 150 shows spanning March 2018 to November 2019.

But, disaster has stuck during the European leg of her tour.

The singer had just performed a show in Oslo, when a plane carrying her management and crew crash-landed.

The private jet burst into flames.

According to TMZ, the deadly crash occurred in the early hours of Tuesday at Aarhus Airport.

The aircraft was carrying 10 passengers.

One of which was the singer's manager and her team, who were all traveling on the Cessna 560XL plane.

They were making their way to Denmark for the singer's next concert when the incident happened.

According to Metro, the plane missed the runway and crashed into the grass turf causing it to burst into flames. Pictures taken from the airport show the true extent of the damage to the aircraft before it was removed with a crane.

The airport's firefighters managed to tackle the blaze.

“The foreign ministry has been informed about the accident and contacted all the ambassadors of the relevant countries," police said.

The singer's crew were lucky to be alive after the accident, with police saying that the exact cause of the incident is still under investigation.

P!nk herself was said to not be on the aircraft.

The star’s Norwegian promoter, Kristin Svendsen told Norway’s VG newspaper: “Pink was not personally on board, but her manager and several other members (on) the tour were, but it all turned out OK." The star has not yet made a public comment about the horrific events.

Though she did take to Instagram to promote her Oslo show on Tuesday.

"OSLO, NORWAY tonight!!!!," the performer wrote on her Instagram.

Despite the terrifying ordeal, remaining shows are said to still be going ahead.

The singer is scheduled to perform tonight in the Danish town of Horsens.

The star then has 2 more concerts left in Europe.

One in Gelsenkirchen, Germany, and another one in The Hague. She's also due to perform in New York, Toronto, and Brazil after wrapping up her European leg of the tour.

Aside from embarking on her world tour, P!nk has been making headlines for other reasons too...

The star has said that she's decided to raise her kids' gender-neutral. Considering her own gender blurring style and fluidity, we aren't too surprised that she won't be limited her children to gender binaries. And the star has revealed the reason behind her decision. Keep reading to find out what it is...