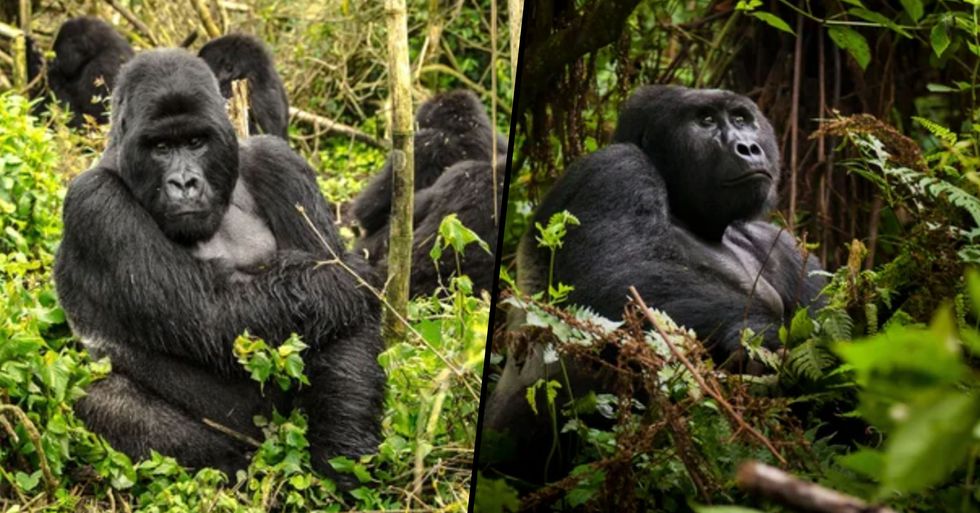 Justice has finally been served for world-famous silverback gorilla, Rafiki, who was stabbed to death by a poacher in June. But it seems not everyone is happy...

It is a devastating reality that the majority of animals that are extinct are so because of humans.

Despite its barbaric practice, hunting is still very much a popular sport and way too many animals are unnecessarily killed because of it.

But Africa is sadly the world's hotspot for hunting and poaching.

Trophy hunting is all too common in Africa...

And its native animals, such as elephants, lions, zebras, and antelopes, are ruthlessly killed every year to simply become a trophy for the hunter.

Their numbers have fallen from as many as ten million a hundred years ago to as few as 400,000 today.

Many argue that trophy hunting is actually saving wildlife...

But we all know that killing wild animals for sport is not good for "conservation"... at all.

And there's no denying how cruel hunting is...

But it seems that hunters aren't prepared to stop their inhumane sport any time soon...

Devastating news came in last month that a world-famous gorilla has just lost his life after being "speared" by hunters.

Rafiki was a twenty-five-year-old mountain gorilla who lived in Uganda.

The gentle giant was a favorite of tourists who spent the majority of his life in the Bwindi Impenetrable National Park.

He was the leader of a group of seventeen gorillas...

This group was described as habituated, meaning that its members were used to human contact.

Rafiki and his group were one of the reasons why tourists were drawn to the national park...

And for years now, people from all around the world have been traveling to Uganda to get a glimpse of these majestic creatures.

But on June the 1st, Rafiki went missing from his usual spot.

A search party found his body the following day.

A spear had been thrust into Rafiki's abdomen...

And according to National Geographic, the spear penetrated as deep as his internal organs.

It was a brutal attack...

And Rafiki did not deserve to die.

In the wild, there are just over 1,000 mountain gorillas in existence...

And the Uganda Wildlife Authority (UWA) has described Rafiki's death as a "very big blow."

Rafiki's death will be potentially disastrous to the group of gorillas he has left behind.

"The death of Rafiki leaves the group unstable and there is the possibility that it could disintegrate," Bashir Hangi from the UWA told the BBC. "It has no leadership at this time and it could be taken over by a wild silverback."

Rangers tracked a suspect to a nearby village, where he was allegedly found with bushmeat as well as snares, a spear, and bells to be strapped to the collars of hunting dogs. He admitted that he and 3 others had been hunting antelope in the park and that he killed Rafiki in self-defense after the animal attacked.

Of course, people all around the world have been left heartbroken over Rafiki's death...

@LeilaniMunter @LeoDiCaprio @KrapelsMarco My view: death penalty to the culprits. I am not normally a capital punis… https://t.co/coO2So1pH0
— Michael Lee (@Michael Lee)1592018509.0

And many have been expressing their anger over the people who are responsible for this cold-blooded killing.

This week, it seems justice has finally been served.

The poacher responsible for Rafiki's death, Felix Byamukama, has been jailed.

Byamukama pleaded guilty to charges including killing a gorilla, entering a protected area, and being in possession of illegal meat.

He was also found in possession of several hunting devices including a spear and rope, discovered during a search of his home.

He has been sentenced to eleven years in jail.

"We are all relieved that Rafiki has received justice and this should serve as an example to other people who kill wildlife," said wildlife official Sam Mwandha following the announcement.

"If one person kills wildlife we all lose, therefore we request every person to support our efforts of conserving wildlife for the present and future generations."

Keep scrolling to read about the dogs who have been specially trained to protect wildlife from poachers...