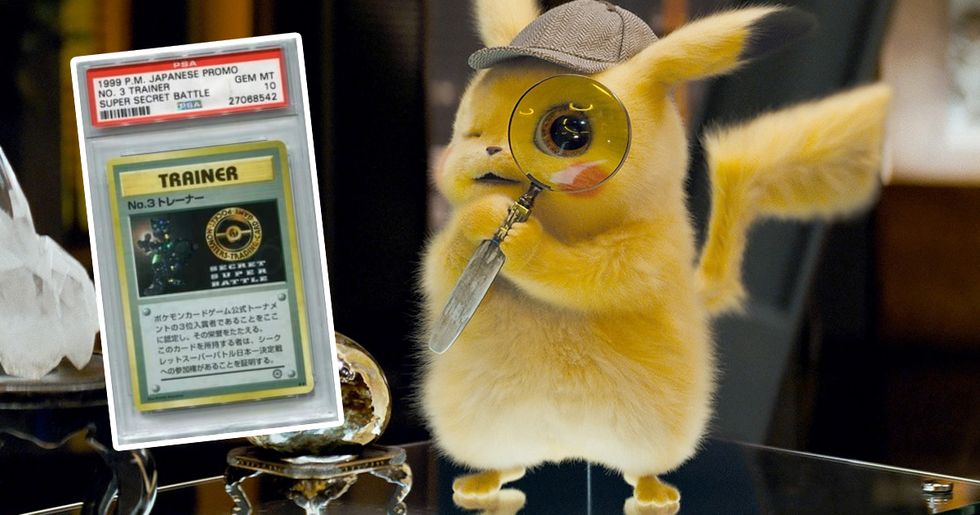 This Pokemon Card Sold for 60,000 Dollars and Then Got Lost in the Mail

But this story gets worse for the buyer and the seller because the hyper-rare card in question didn't make it to its destination. Somewhere along the way, the card was lost, and no one has any idea where it went.

Now, the entire Pokemon card collecting community is going to great lengths to get this card back. Keep reading to find out what they're doing and also, how the hell a Pokemon card gets to be that valuable in the first place...

The Pokemon Trading Card Game came out in Japan in 1996.

It's hard to overstate how important the Pokemon Trading Card game has been to Pokemon's popularity. What other anime came out with an easy-to-play game that worked just like the major battles on the show? If there was a Dragon Ball Z card game, maybe Goku would've ended up in the Macy's Thanksgiving Day Parade instead of Pikachu.

Three years later, in '99, it came to North America.

Remember, this was a time before cell phones, so all we had to do during lunch was play with Pokemon cards. You'd build decks around specific Pokemon types. I had a Fire deck, just because I wanted to use the Charizard that I got in my first pack.

Unlike most competitions, winners of the Pokemon World Championship don't take home trophies. I would've guessed that that was because there aren't really trophies in the Pokemon universe, but then why didn't they give out badges? That's what you get when you beat a gym leader in the video game!

Instead, they won trophy cards.

Ohh, it was because they were already printing cards, and it was easier to print more cards than to design a whole new prize. Stick with what you know, I guess?

And that's how some Pokemon cards get to be as valuable as they are.

These trophy cards were only given out to the winners of various Pokemon contests, meaning that there are very few of them in existence. No matter what the item itself is, when it's as rare as these trophy cards are, collectors are willing to pay a pretty penny.

A mint condition Pikachu Illustrator card, for example, is worth 100,000 dollars.

The only way to get this card was to win an illustration contest at a specific comic book convention that took place in 1998. Only twenty to forty were made, ever, and, according to GeekWire, only 10 "are graded in top condition and it is unknown how many still remain with the public."

A functional bronze medal, "Trainer No. 3" was awarded to those coming in third place at various Pokemon World Championship events throughout the years. Each tournament had unique cards, though, so the older Trainer No. 3s are worth more than newer Trainer No. 3s.

One Pokemon card dealer, pokemonplace, had a very valuable Trainer No. 3 card in his possession.

In a story coming to us by way of Polygon, the Pokemon card dealer, pokemonplace, had a Trainer No. 3 card from a tournament held all the way back in 1999.

And he sold that bad boy online.

Who knows why pokemonplace was looking to offload the merch, but, you know what they say about Trainer No. 3 cards: you have to let them go, and, if they were truly yours in the first place, they'll come back to you.

Another wildly wealthy Pokemon card collector bought it in August 2018 for 60,000 dollars.

60,000 dollars! That's a third of the way to buying a house in a third of the states in the U.S. If you took third place in three Pokemon tournaments in the late '90s, you could be a homeowner in Ohio.

But the card never arrived.

According to Pokemon card-based Youtuber, smpratte, who knows both the buyer and seller of the card and has been tracking the situation, the card simply never arrived.

pokemonplace, of course, put insurance on the card...

pokemonplace put the card in the mail with the US Postal Service, but he didn't just drop it in the mailbox on the corner. He put $50,000 worth of insurance on that bad boy — the maximum amount that you can insure a package.

But the card was signed for by a middle-man shipping company in New York.

Apparently, it's common within the collectible community not to ship items directly overseas, but to use a separate entity — in this case, a company called Aramex — to package together multiple items and ship them internationally. That's what pokemonplace did, and Aramex signed for the card, saying that they had received it. And that's the last that anyone saw of Trainer No. 3. It simply wasn't in the bundle that Aramex shipped out. And, since the card was signed for, the US Postal Service is off the hook, insurance-wise. For both pokemonplace and the card's buyer, this has to be maddening.

Either the card just got lost in the shuffle...

Now, you might think that I'm having a bit of fun here, since cards are shuffled, but, I assure you, I take the loss of a rare Pokemon card far too seriously to ever make a pun intentionally.

Or maybe someone yoinked it.

I know, Pikachu, it's hard to believe. But some people out there will snatch something that appears valuable if they have the chance, even a card from a children's card game.

Now, the card has a unique certification number.

As smpratte explains in his video, this specific Trainer No. 3 is registered with a unique certification number. To put it another way, this card can be tracked.

So, if it was stolen, the card can't be re-sold.

smpratte makes the comparison to a stolen piece of art — it's not like you can snatch a painting off the wall of the Louvre and take it to a pawn shop. The law will come after you.

Right now, the buyer just wants the card back.

In what actually feels like a magnanimous gesture, the buyer of the card has told smpratte that he only wants the card back. No further vengeance will be taken. It feels like a Game of Thrones-style bargain: you return my card, and no further harm will come to your house or heirs.

They've promised not to take legal action if the card turns up.

Criminals who confess are often punished more severely than those who don't, if only because that confession becomes concrete evidence. The card buyer here is junking all of that — they just want their card back, legal system be damned.

But who knows what they will do?

Now, I'm not saying that this mysterious buyer would send a Charizard after the thief, but if anyone had the power to do so, you'd have to think that it'd be the guy who cares enough about his Pokemon card collection to spend 60,000 dollars on a single card...

Plus, pokemonplace is offering a $1,000 bounty for information.

That's right, even the seller, who could wash his hands of this whole situation once the 60k appeared in his account, is willing to pump more money into this deal to make sure that the card gets to its rightful owner.

So, for just a second, put yourself in the shoes of the card thief.

You're working the docks, you spy a packed-up Pokemon card and see on your dock-forms that it's heavily-insured. And, since times are tight, you snatch it and go about your day, thinking that you can eBay it in a few days and make a little pizza money. Then you find out that it's one of the rarest cards in the world and that you can never sell it and that there's a swath of rabid Pokemon card collectors after it. Wouldn't you just send it back and be done with it?

That makes me think that the card is lost for good.

Somewhere during the long voyage over the ocean, Trainer No. 3 must've fallen out of the plane — perhaps through the holes where the landing gear comes up — and ended up in the sea.

Can you imagine losing $60,000 in one go? If you're a homeowner in Ohio, that's one-third of your house just vanishing.

The entire situation is wildly frustrating.

I'm clenching my fists just thinking about it! The worst part is, it's not like pokemonplace can put on scuba gear and go search the entire ocean for the card. There's absolutely nothing that anyone can do.

That said, this buyer is probably the best possible person to lose $60,000.

Unless this whole thing was a deal to get out from under the thumb of the mob.

Maybe that was the deal for that lowly dock worker — you get us Trainer No. 3, and we don't break your legs for all those gambling debts? Listen, the mob has its fingers in a lot of businesses — would Pokemon card collecting be so surprising? It isn't just possible, I'd say it's likely.

Here's the entire explanation from smpratte, if you want a deeper dive.

This smpratte fellow is deeply invested in tracking down this Trainer No. 3. Let me just say, if you ever lose a Pokemon card, I pray you have someone on your side as dedicated as smpratte.

And, if you do have the card, maybe just give it back?

There are kids all over the world competing in Pokemon tournaments. Don't let them think that their prizes can just disappear without a trace. Collecting $60,000 for their trophy cards is all that's keeping them going.