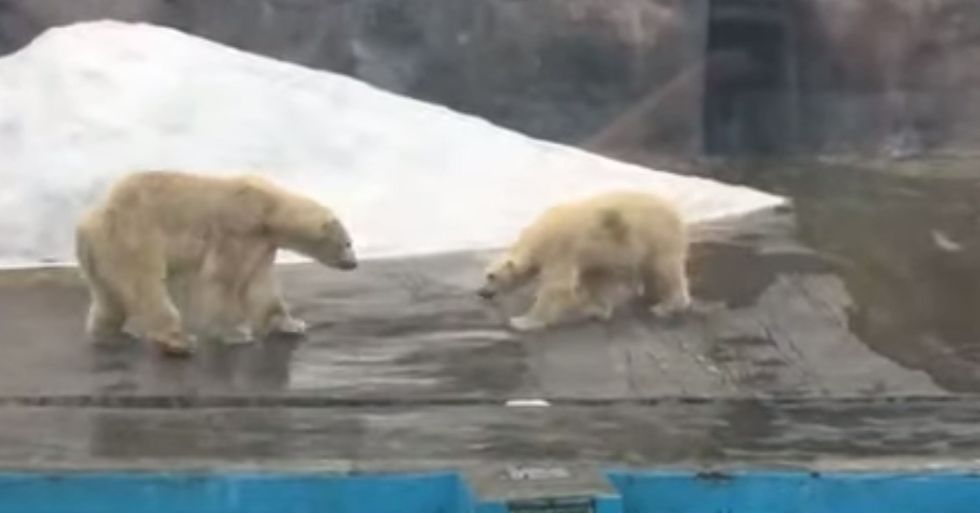 Polar Bear Shipped 1,900 Miles to Mate Is Killed Immediately by Male During Mating

We are all well aware of an animal's unpredictability, and this is only enhanced when they are kept in captivity.

Make sure to keep scrolling to read the tragic story of a polar bear who was killed by a new male partner during mating...

There are many reasons why animals are kept in captivity...

And their own protection is one of these reasons.

Animal experts claim that there has been a rise in the number of polar bears being hunted.

Trophy hunters are known for their cruel practices, murdering some of nature's most amazing animals for their own personal gratification.

Clearly, no animal is off-limits to these vile killers. From the hottest places in the world to the coldest, it seems as if trophy hunters will span the length of the planet in order to get what they want.

Social media platforms have been plagued with snaps of dead animals.

And they're not even ashamed of the heinous crimes they have committed. Instead, it's all a game to them, where the winner is congratulated for being the best killer. How disgusting.

But it seems as if trophy hunters are beyond caring about that. All they're out here to do is kill and then shamelessly expose themselves on social media as if it's something to be proud of.

And polar bears are at the forefront of the devastating effects.

Recently, experts have claimed that the number of polar bears being hunted on organized trips in Canada, which can cost up to 44,000 dollars, has drastically increased.

Trophy hunters are traveling to the country in the hope that they'll get lucky.

The issue has become extremely serious. In the past few years, over 5,000 polar bears have been killed for "fun".

And sadly, the only way we can protect these beautiful creatures is to place them in captivity.

It is believed that there are approximately 25,000 polar bears in the world...

Many of these polar bears live in Russia...

And the most tragic story has emerged recently from the Russian Izhevsk zoo.

A female polar bear named Aurora had lived at Krasnoyarsk zoo for over 10 years.

She had been paired with a male bear named Felix during her stay but the couple had failed to produce offspring together.

People at the zoo were eager for Aurora to reproduce...

And according to the Siberian Times, zoo officials decided to try to match her with a new suitor named Baloo at Izhevsk zoo.

Staff were so excited about the hook-up, they even began expanding the enclosure for future cubs.

"Their meeting was destined for fate. Both are purebred, pretty, originally from nature with valuable genetic material," they wrote on social media, ahead of their meeting in March.

And her first meeting with her new husband was caught on camera, which shows Aurora advancing towards Baloo before she changes her mind and turns away.

The following weeks went very well for the pair...

They enjoyed a 2-week courtship, playing, swimming, and basking in the sun together.It also appeared Aurora was in heat and receptive towards her new man, which is exactly what the zookeepers wanted.

But when it seemed like the moment was about to happen...

"At the very moment he mounted her, something went wrong," Krasnoyarsk Head Keeper Andrey Gorban said, "Aurora showed her character, and Baloo was furious."

Immediately seeing that something was amiss, keepers threw water at the much larger male, and shot him with a tranquilizer dart...

But it was too late.

"He fell near Aurora but she was already dead," Gorban said.

Footage of the vicious attack exists but it has not been released.

Devastated keepers at both zoos have analyzed it, trying to figure out what went wrong and led to the fatal attack, believed to be the first of its kind in captivity. "Everything happens in nature, but in zoos, this is the first case, and we will carefully study what happened, both for ourselves and for science," Gorban said, "I haven't studied it thoroughly so far, but world-class specialists cannot remember such cases in zoos. It was a completely unexpected outbreak of aggression."

Even though males have been known to kill females over food in the past, it's rare for them to kill over a situation like this.

"Everything was absolutely normal, otherwise they would not have been connected."

The zookeepers have been left completely crushed by this loss... but this goes to show the unpredictability of animals held in captivity.