Polar Bears Have Invaded the Russian Islands, Causing a State of Emergency | 22 Words 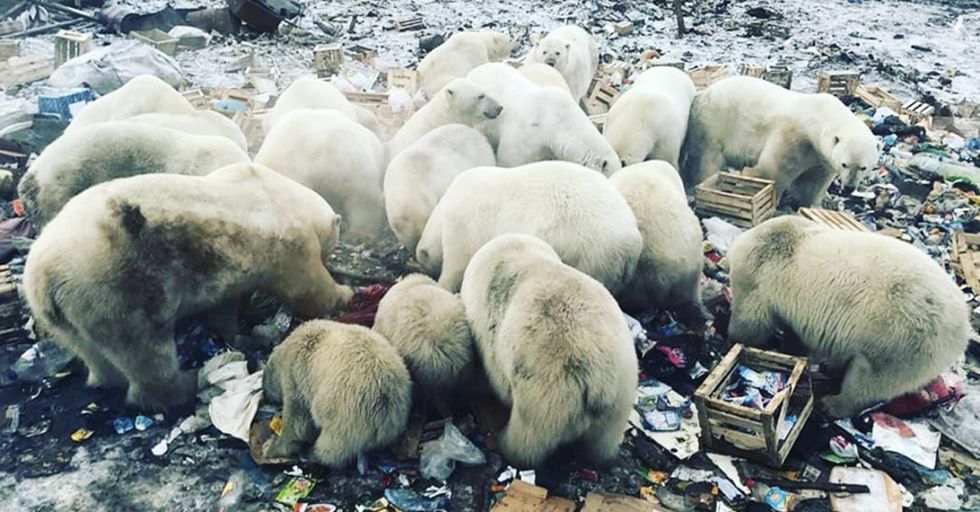 Polar Bears Have Invaded the Russian Islands, Causing a State of Emergency

Although a debate around the legitimacy of climate change may persist among some, evidence that global temperature change is permanently affecting life on Earth is becoming increasingly unavoidable.

2016 was the hottest recorded year since 1880, breaking the high-temperature record for the third year in a row. Two-thirds of Australia’s Great Barrier Reef has suffered coral bleaching due to increased water temperature. The ocean is at its most acidic, our atmosphere is filled with more greenhouse gases than ever before, and Arctic glaciers are melting substantially every year. Many scientists agree (about 97% of them) that global warming is really happening, and that it’s probably our fault.

But while most humans have the luxury of temperature controlled homes and easy access to sustenance even when temperatures border on the unlivable, wild animals losing their homes to the ramifications of climate change have to take survival where they can get it. The most recent effect of our planet’s troubling climate shift is the arrival of agitated polar bears in a Russian town not far from their melted ice cap habitat.

Over the last few months, over 50 of the wild animals have descended upon Belushya Guba.

Belushya Guba is on an island in the Arctic Ocean.

The affected region is a settlement with a population of roughly 3,000 on the archipelago Novaya Zemlya.

The invasion is unprecedented.

Local officials say they haven’t seen signs of polar bears this close to town in decades.

The bears are behaving aggressively.

Many are violently chasing local residents, forcing entry into homes and businesses, and often attacking people.

People are afraid to leave their homes.

Life has virtually come to a halt in Belushya Guba, where many parents are refusing to let their children go to school out of fear they’ll be attacked.

The polar bear attacks are unpredictable.

Belushya Guba resident: "When the polar night started, the polar bears started to blend in with the snow & scare yo… https://t.co/zfNqQeVhUa
— Alec Luhn (@Alec Luhn)1549919274.0

The animals blend with the snow, and often cannot be seen lurking near local homes until it’s too late.

A significant number of bears remain in the city.

Authorities say between six and ten bears are still in the settlement of Belushya Guba, and more could arrive.

They’re just coming right on inside.

Likely hunting for food, the polar bears are not shy about intruding upon residential properties.

Polar bear invasion life hack from Belushya Guba, Russia: When kids are outside, station a car nearby "so that if a… https://t.co/yYeFwNLpEC
— Alec Luhn (@Alec Luhn)1549895795.0

The polar bears truly have free reign in the terrified town.

It’s a lot more dangerous than this guy makes it look.

This morning I spoke with local resident Sergey Kudinov about the "invasion" of polar bears on the remote Russian a… https://t.co/m0LMiT5WSs
— Freya Cole (@Freya Cole)1549866969.0

Getting this close to a hungry, pissed-off polar bear seems like a pretty obvious bad idea.

It’s dangerous for the polar bears, too.

The bears are instead stuck rummaging through garbage, searching for food and safety while they starve.

It’s a difficult situation for everyone involved.

People and bears just shouldn’t have to be this close to each other.

Local officials have declared a state of emergency.

The bears have been arriving since December, and so far the town has been unsuccessful in mitigating the sudden invasion.

According to the International Union for Conservation of Nature’s Red List, polar bears are a vulnerable species, and local authorities want to avoid violent measures against the already dwindling population.

But they’re running out of options.

The town has attempted to expel the bears with patrol car sirens and dogs, to no avail.

Local conservationists are pushing for a humane approach.

The Federal Service for Supervision of Nature Management has denied the town a license that would allow removal by extermination.

A specialist group has been assigned to resolve the issue.

A team of experts have been deployed to find a solution in Belushya Guba. The team is reportedly still considering a cull, or selective slaughter, as a last resort to restoring safety in the town.

It’s a heartbreaking predicament for the town.

And for the rest of the world, as the cause behind the polar bear invasion is the global climate change destroying their arctic home.

The polar bear diet relies heavily on seals, an animal whose population is dwindling with the melting glaciers.

The carnivorous creatures were recently found to have an appetite far larger than expected, which puts them at a high risk of starvation.

This drives the bears inland.

Before the N Zemlya "invasion," people were facing down polar bears in Dikson & besieged by them at a Kara Sea weat… https://t.co/ojMItaLEEj
— Alec Luhn (@Alec Luhn)1549802788.0

In search of sustenance, the wildlife community is forced to come into much closer contact with settled human territories outside their usual habitats.

Polar bears aren’t the only animal on the move.

The effects of shrinking ice cap habitats are also being felt within the tiger and reindeer populations in Siberia.

Climate change is causing the spread of malaria.

Roughly half of the planet’s species are being driven from their homes.

Land animals are averaging a migration speed of over 10 miles per decade. Marine life is migrating four times that fast.

The most recent mass migration this large was the last ice age, which redistributed and eradicated a variety of populations around the world.

The polar bear population currently sits at 26,000, and the direction of climate change patterns is troubling for them as well as the planet at large.

As Earth’s habitable locations shrink and cause migration, humans, and animals will be sharing space more often.

In an effort to alleviate the challenges of human and wild animal interaction, the World Wildlife Fund (WWF) has established protective measures like patrols and tools to deter animals from entering properties.

Some are calling for Russia to create a specialized space for the bears.

It seems cruel to punish and drive out an animal without a home, but the town of  Belushya Guba has the safety of its citizens to consider as well as the polar bears.

Solving the problem for good will take more than safety protocols.

Unfortunately, these measures are just a temporary solution to the overwhelming problem of global climate change our planet faces.