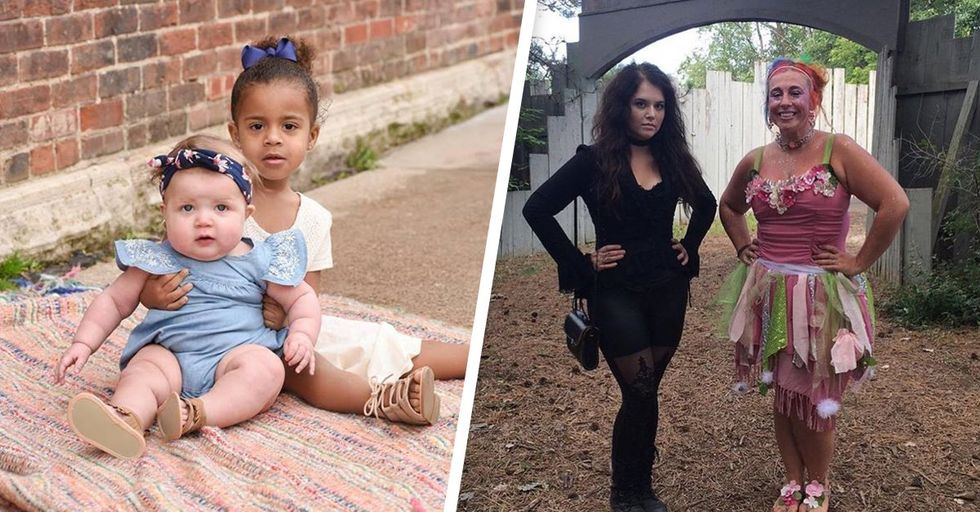 When growing up you try everything you can to be your own person, from your personal style, likes and dislikes, and values. This is even more apparent when you grow up with siblings.

Siblings will agree or disagree but for the most part, they end up enjoying many of the same things. Some kids even grow up to be the polar opposite of each other, even to the extent that you'd never guess they were related.

Alexandra Bishop posted pictures of herself and her sister on Twitter showing how they are polar opposites. The internet thinks they are amazing and I couldn't agree more. Because instead of them having a sibling rivalry or quarrels, they embrace their sibling differences and love each other.

A sister on a mission decided to give social media a glimpse of her life vs. her sister's life.

This sounds totally normal. People share pictures of their family members all of the time. Except the tweet Alexandria Bishop shared with pictures of her sister were very unique.

Bishop decided to share how their homes and personalities are completely opposite.

And when people started to dive into the post and notice how different the siblings are, they fell in love.

The tweet quickly went viral and you know what, I totally get why.

The sisters are total opposites but you can tell that they fully embrace their differences and love each other for it.

It's quite interesting to see them both together.

Personally, my mood is in between rainbow and goth.

Some days I am feeling like I have a dark black heart and other days, I want to frolic gleefully like a bunny on a bright spring day. I could fall somewhere in the middle.

Check out the fence the 'rainbow sister' painted.

Their polar opposite styles are very obvious in these pictures.

Meanwhile, Alexandria’s front door mat says “Go Away" and honestly, I’m all about that vibe too.

I lie somewhere in the middle. Once I’m done being a happy go-lucky rainbow unicorn, I need to take a break and be a dark matter that turns off lights and hisses at anyone who tries to talk to me.

The entire reality of these two sisters is hilarious.

It’s not every day you see people within the same family being this different from each other.

And as the tweet went viral, the outpouring of replies came in.

Our feelings about these amazing sibling differences were explained so well in just these next few tweets.

Like this one of two homes that are obviously inanimate objects of the rainbow sister and the goth sister.

Bishop even replied to the tweet saying “we need to get houses next to each other ASAP". I really hope they do.

How perfect is this one?

Sanrio store being directly next to Hot Topic was just to perfect not to share. This is exactly what these sisters are.

I have three daughters and there is not a day that goes by that I don’t think about what they’ll be like when they are grown.

These sisters fully demonstrated how we can all get along even when we have major differences.

And this is the mood everyone should be on.

What’s wild is that I have siblings, but we are more alike than these sisters are.

My younger brother and myself practically look like twins even though we don’t truly see our similarities, we embrace it.

And while there are stories of siblings having completely opposite personalities, there are also siblings that are different from one another because science is wild.

Genetics can be quite interesting.

Their sibling differences are caused by genetics.

Both sisters have the same parents yet each child was born with characteristics from the other parent.

Willimina the older sister looks most like her father while her baby sister, Valentina, looks like her mother.

It's not everyday that we see biological siblings that look so remarkably different from each other.

The siblings went viral on a post by Facebook page, ‘Love What Matters’ and their story is truly adorable.

The mom of the little girls explained that when Willimina was born, everyone said that she looked just like her husband. Then when they were expecting their next daughter, they also expected her to look like him.

Of course, the unexpected happened and what a sweet surprise.

"Never in a million years would I have guessed she would be born with fair skin, auburn hair, blue eyes, and truly my mini me.", the mom wrote about her second daughter.

She went on to explain that they will raise them no differently from each other.

Genetics can be so weird.

I know because between my kids, my second daughter is a splitting image of her father. While my other daughters are most like me.  But my daughters' bad habits, are all definitely things they got from their father.

Sometimes siblings do look a lot a like. So much that people think they are twins.

Some people that aren't even siblings look a lot a like too. What's up with that, nature?

But a lot of times, some siblings look absolutely nothing a like.

If it weren’t for their last names being the same, we wouldn't be able to guess.

It’s amazing. Some of these I didn’t even know were related.

My mouth legit dropped when I found out these two actresses were sisters. And they’re totally giving me rainbow sister and goth sister vibes.

Is it just me or do none of the Kardashian kids look like Khloe.

How old were you when you found out Ashton Kutcher has a twin brother? Because I was today years old. I had no idea and I am shook.

Whoa! It’s like they say, you learn something new everyday. I really like him in Scream Queens.

You know what, I had no idea Emma had a sibling. Separate, I wouldn’t have been able to put two and two together and guess he’s Emma Watson’s brother but together, they actually look a lot alike and it’s kind of weird.

I had no clue they were all related. And now that I think about the movies that I’ve seen them In, I can totally see how similar they are in their acting style and mannerisms. The sibling vibe is strong here.