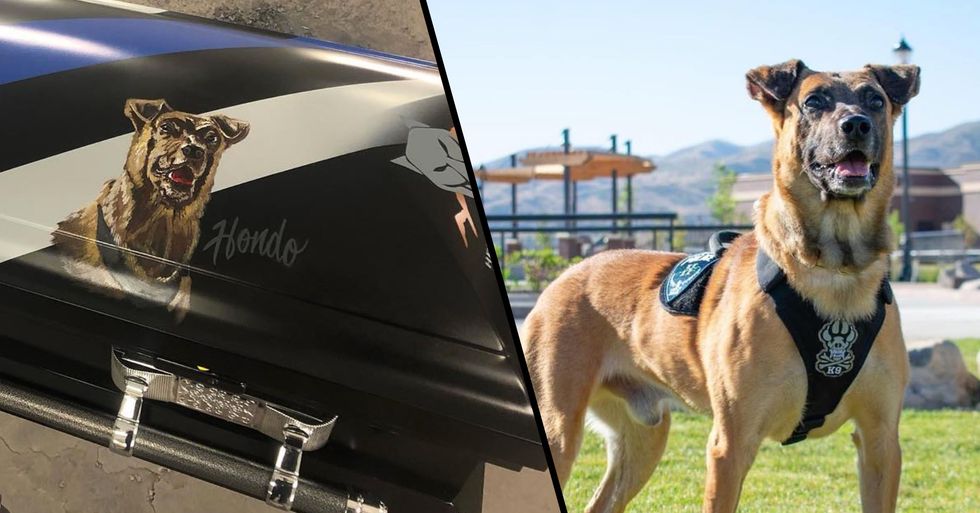 Dogs have proven to be loyal and trustworthy working colleagues, and many different work sectors use dogs to their full advantage.

But one police dog recently died in the line of duty, and the tribute his colleagues are paying to him is truly beautiful.

But the tragic reality of working for the police force is that lives will be lost along the way...

And this is sometimes the dogs who work bravely for the forces.

A police department in Utah suffered a tragic loss recently...

Hondo, a K-9 police dog who worked for Herriman City’s Police Department, was shot on duty on February the 13th.

Officers were trying to apprehend a fugitive...

But Hondo was shot in the sternum, and he passed away from his injuries at the age of 7.

He was considered to be one of the best K-9 dogs in Utah...

And alongside his partner Sgt. Ben Ricks, he assisted in 100 felony arrests.

Losing an animal is like losing a member of the family...

So we can only imagine the difficult times that the officers at Herriman PD are going through right now.

After Hondo passed away...

The police department decided to do something special for the brave dog's funeral, so they contacted a Utah automotive body shop to create a special coffin... and of course, they were happy to help.

The garage usually works on motorcycles, but they were happy to help the regulars at Herriman PD...

The guys at Rawtin Garage created a beautiful custom coffin for the dog, and it is amazing how they completed it in just twenty-four hours when they usually have a 2-month waiting period.

Speaking to CNN, they said, "They asked if we could get something together since we have done work on their motorcycles before."

The guys at the garage worked super hard to make the coffin as perfect as possible...

"We had a lot of pressure. I think the call came in Wednesday night. And they said [they were] bringing in a casket tomorrow morning. It’s hard work, but there’s an incredible sense of satisfaction," they explained.

John already had a good relationship with the police department...

A lot of the officers have used the garage's services in the past for their motorcycles, so John and his team wanted to pay as much respect as possible to Hondo and his team.

Keith said, "In a weird way, it was kind of a spiritual experience. You feel like, by the time you’re done, you really got to know Hondo." Keep scrolling to learn about the police K-9 dog who died after he was left in a hot patrol car...