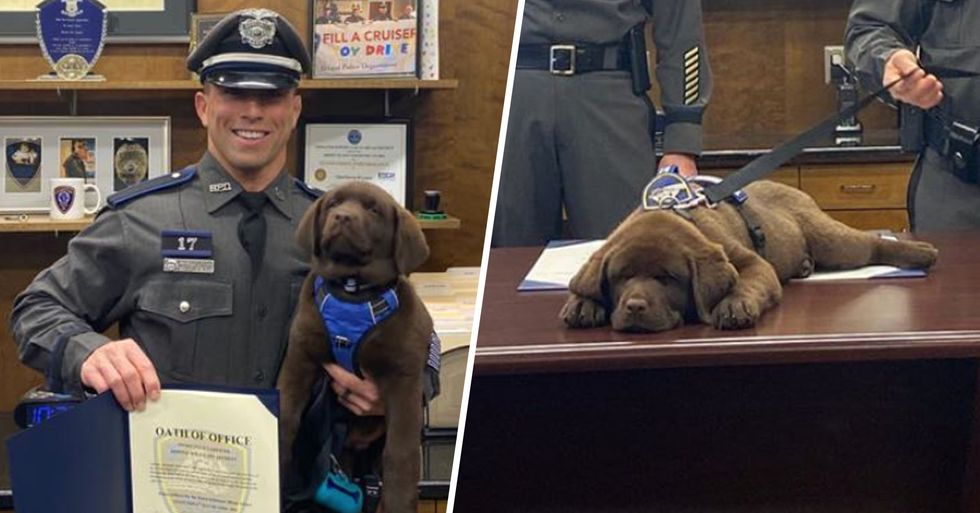 Dogs have proven to be loyal and trustworthy working colleagues, and many different work sectors use dogs to their full advantage, including the police.

Training in the police force is tiring work for these pups - something that was proven in the cutest way this week when a police dog slept all the way through his swearing-in-service.

Keep scrolling for the adorable pictures...

The twelve-week old pooch is working as a therapy dog in the Bristol Police Department in Rhode Island.

The police department had initially thought about taking on another narcotics or bomb-sniffing dog...

However, one of the team suggested a therapy dog instead. Brody joined the team in mid-March, and it seems he came at the perfect time.

He quickly helped alleviate all the stress and anxiety in the force during these uncertain times.

"People are really stressed, especially in law enforcement," explained his handler, officer Keith Medeiros. "Just by walking in the police department with Brody, people immediately smile, they immediately get into a better place. They want to pet him, want to hug him and it’s just a really good thing."

"He plays really hard and he sleeps really hard. "When he’s not playing, he’s sleeping, which is kind of tough because he sleeps a lot."

All his traning really seems to have tired him out...

So much so, that he slept through the whole of his swearing-in ceremony...

"We put him down on the desk and he was just so comfortable that he lay down and fell asleep," Medeiros said. For another adorable story, keep scrolling to watch the moment a dog reports himself missing...