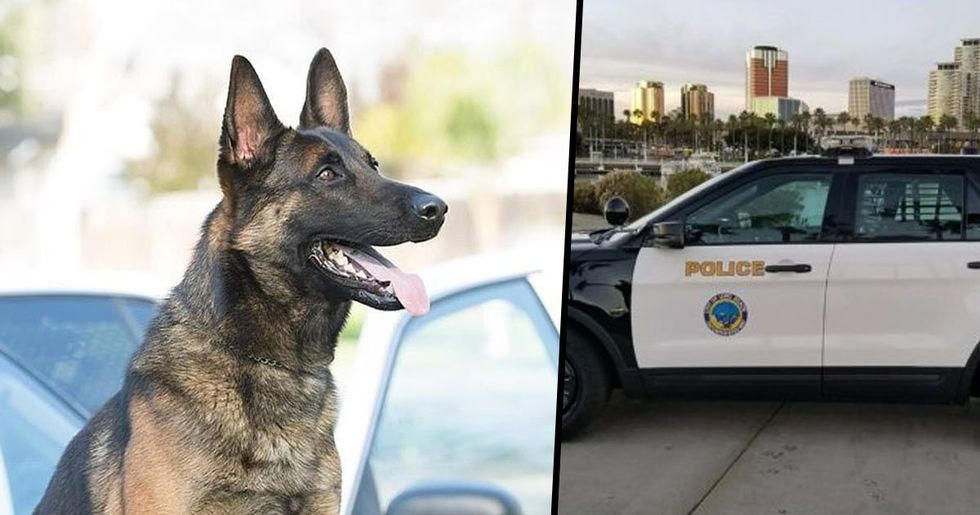 As any responsible dog owner will know, leaving a dog in a hot car for a long period of time is a bad move. It can result in serious injury and even death, so doing this is a silly and very irresponsible thing to do.

Luckily, the majority of dog owners out there know not to do this, so one would expect the emergency services to do the same... right?

A K9 officer has recently died after being left unattended in a patrol car on a hot day and it has caused outrage around the world. Keep scrolling to learn about the tragic story and how this incident was even allowed to happen...

Never ever leave your dog in a hot car for a long period of time.

Leaving a dog in a hot car is a death sentence...

So one can only imagine the heat that these poor dogs must endure when left alone in a car.

Heatstroke can kick in within a matter of minutes...

Animals can sustain brain damage or even die from heatstroke in just fifteen minutes, which is an alarmingly quick period of time.

Dogs cool down by panting...

So this means that beating the cramped heat of a car is extremely difficult for dogs, and, more than often, dogs will cause harm to themselves when trying to adapt to these inhumane conditions.

It's shocking that some pet owners can simply leave their pets in these conditions...

There is absolutely no excuse to leave a dog, unattended, in a hot car for a long period of time, and any responsible dog owner will make sure that their dog is constantly kept cool and hydrated.

This caution applies to all dogs...

And this, of course, includes dogs who work in the emergency services and spend a lot of time in and out of vehicles.

Ozzy worked as a K9 police dog for the California Police Department...

He was a six-year-old German Shephard mix and had worked as a K9 for more than five years.

What does a K9 officer do?

A K9 officer is pretty much any dog that assists the military, police, and law enforcement personnel. Ozzy had assisted numerous groups including the FBI and the Bureau of Alcohol, Tobacco, Firearms, and Explosives.

On the 14th of August of this year, Ozzy was found dead by his handler in a patrol vehicle, and it was reported by The Los Angeles Times that Ozzy and his handler were both off duty when he was found in this way.

The day on which Ozzy died was a hot one...

Temperatures that afternoon were reported to be between eighty-one and eighty-four degrees - not at all suitable weather conditions for a dog to be left without water or fresh air.

As reported by The Daily Mail, Long Beach Police public information officer, Arantxa Chavarria, said in a statement: "A veterinarian examination of Ozzy and the preliminary results determined the cause of death to be heat-related."

It is believed by professionals that the fail-safe equipment used in the patrol vehicles was not working...

"Our K9 vehicles are outfitted with fail-safe equipment that is meant to generate an alert. At this time, we believe this alert may not have been working," Chavarria went on to say.

The Police department claimed that all of the patrol vehicles include a heat-controller system that uses a cellphone app to signal when the vehicle is getting too warm.

The system let down not only Ozzy, but the entire Long Beach Police Department.

"Another mechanism provides a manual button that only shuts down the system when activated by the handler," Chavvaria claimed.

"We ask that you respect the handler and his family," Chavarria said. "Our department is mourning Ozzy's loss as we would with any of our employees."

"Our K9s are an indispensable part of our department, and we will continue to view them as partners."

Ozzy's death is under investigation...

The officer who reported Ozzy's death was the dog's handler and he has not been identified for privacy while the investigation is underway.

The statement was posted to their Facebook account and it acknowledged the difficult time that the department is going through over the loss of Ozzy.

They have called it a "tragic accident..."

But many do not see it this way. People have voiced their frustrations on Twitter, claiming that Ozzy's handler should face punishment for his irresponsibility.

People believe that the handler should face the consequences...

It was the handler's responsibility to take care of Ozzy and to ensure that he was in good health at all times. He failed to do this, which resulted in poor Ozzy losing his life, therefore, many have come to the conclusion that the officer in question should face punishment for his lack of care and authority. For a heartwarming story of a pup just as lovely as poor Ozzy, keep reading. Hank is certainly a hero in his own right.