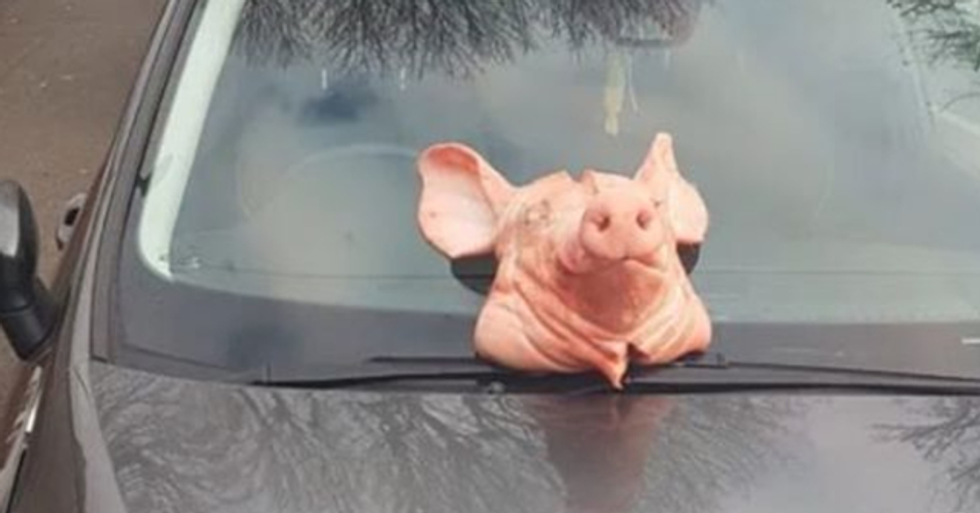 A young police officer has shared her horror and dismay after a severed pig head was left on the hood of her car in a cruel and twisted "prank."

Keep scrolling to see the shocking act of vandalism, and to hear what she's had to say on the matter...

Now, more than ever before, we need to be looking out for our emergency services.

While we are in the midst of a devastating medical crisis, key workers across all sectors are working tirelessly to keep the public safe.

Our emergency workers have been stretching themselves to breaking point.

The ongoing medical pandemic has put a tremendous strain on our hospitals, where doctors, nurses, and caregivers are selflessly putting themselves out on the front line in the fight against the devastating illness.

While medical researchers work tirelessly to find a vaccine for the new virus...

Hospital staff have been pulling inhumanely long shifts to keep up with the influx of patients.

Police services have also been put under extra pressure during the pandemic.

While the rest of the world remains isolated within their homes, our police officers have been bravely taking to the streets to make sure the public is still safe.

Our officers are risking their own health and safety every day in order to do their jobs.

"You’re killing people!" New footage shows a police officer repeatedly shouting at a man who claims to have corona… https://t.co/vYhnYMAEjV
— The Telegraph (@The Telegraph)1585333586.0

Countless footage of these brave officers has been posted to social media, which shows them confronting potentially dangerous and contagious individuals in the street.

And, sadly, some have already lost their lives.

Heartbreakingly, thousands of emergency workers have contracted the virus themselves, and many have died as a result.

It's a dark and difficult time for us all...

And these key workers need the help and corporation of the public more than ever before.

Thankfully, most people have been giving our emergency services their full support.

Thousands have so far volunteered to help out during the pandemic, and hundreds of retired doctors and nurses have temporarily come out of their retirements to assist on the front lines.

All over the world, people have been coming together to support our key workers.

And, in the United Kingdom, the full nation came together to give their emergency service workers a colossal round of applause.

And, in Scotland, they even brought out the bagpipes.

Because of course they did.

Countless heartwarming stories of the public's gratitude to their key workers have been emerging on social media...

A Paramedic gets applauded and cheered by her street before going to work another long shift 😍❤️ Beautiful https://t.co/PgbHprLRik
— London & UK Crime (@London & UK Crime)1585499408.0

This tearful paramedic was applauded by her neighbours on her way to work last week.

But, sadly, not everyone has been so supportive.

In London, a twenty-four-year-old police officer, known only as Laura, has found herself victim of a disgusting attack right outside of her own home.

This young offer was targeted in the most grotesque of ways.

As she left her house to begin her early morning shift, she discovered that someone had placed a severed pig's head on the hood of her car.

Understandably, this horrified the young woman...

Who said the act of vandalism has left her feeling "violated" in her own home.

It has completely devastated the young woman.

Her dad, Paul Taylor, spoke to the metropolitan police and said: "She was just sobbing. As a dad I'm just absolutely raging. Laura's only 5ft tall, there's nothing of her, this is the job she has always wanted to do since she was a child."

Laura does not deserve this.

As does no other hard-working police officer. Paul continued: "These guys may think this is a prank, but this is her house and she's off duty and she's just beyond herself on this. I feel like they're threatening my daughter."

The so-called prank has had a huge impact on Laura...

Who is now even looking at selling her car as a result. Speaking to The Mirror, her dad explained: "She's now worried that she's got to get rid of her car because it's been targeted. She relies on it to get to work. She's now got all this stress on top of the job she's doing.

He stressed that people need to be treating their officers with more respect.

Especially during times like these. "Society needs to understand that it's a bad enough job they're doing when they're in uniform, but to be targeted off-duty, at night, in your own home, it's just disgusting."

The police immediately investigated the hideous act of vandalism...

And they were quick to arrest a suspect. A spokesman for the Metropolitan Police said: "Police were called at 6.12 am on Thursday, April 2 to a residential address in Hackbridge with reports that a pig’s head had been left on a woman’s car. Shortly afterwards at approximately 9.23 am, a nineteen-year-old man was arrested on suspicion of a section s.4A public order offence (intentionally causing harassment, alarm or distress)."

Let's just hope that Laura can get the justice that she deserves. Thankfully, police officers don't always get such horrifying jobs - Keep scrolling to read about the time the police had to break up a huge game of hide-and-seek in Ikea...