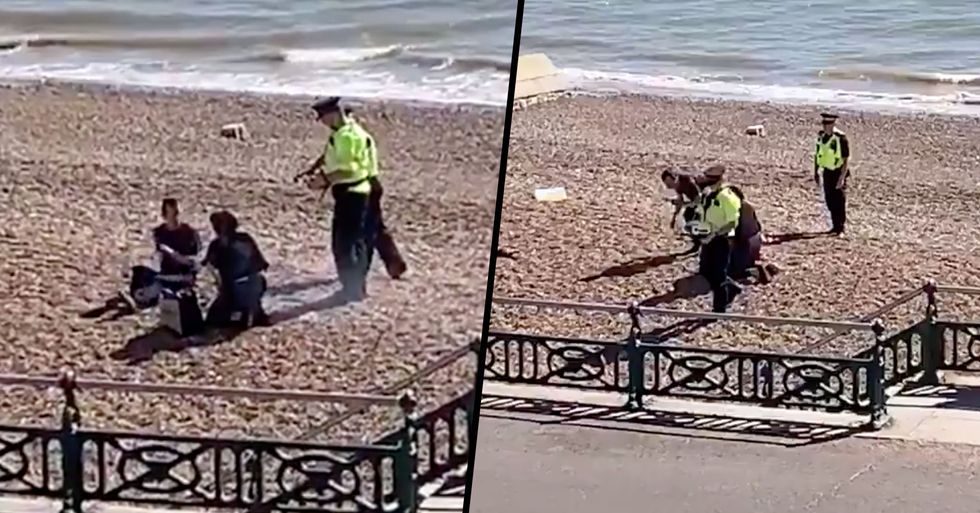 Keep scrolling to check out the police officers who took matters into their own hands when people refused to leave the beach...

Since the first case in Washington, there have been 400,000 more confirmed cases across the country.

With 14,550 positive cases of the virus in the state of Florida, many of whom are teens or in their early twenties, the Centers for Disease Control has advised that all events with more than 50 people attending should be canceled - meaning people need to start taking this very seriously.

But a pair of police officers in the U.K took matters into their own hands recently.

The U.K has been experiencing an influx of nice weather over the last few weeks which, as we can imagine, isn't ideal for the nation who are currently in lockdown.

The U.K government has warned citizens to not be spending time outside...

But Brits will be Brits...

And people have been venturing out to local beaches to enjoy BBQs anyway.

In the city of Hove, which is in the south of England, a couple was spotted enjoying a BBQ on a local beach.

A local resident began filming on his phone when 2 police officers approached the couple and began telling them to pack up their belongings.

The couple don't seem to be listening...

And they just stare up at the officers as they continue to tell them to leave.

So one of the officers empties a passer-by's helmet on the BBQ. Savage.

This savagery has got the internet seriously talking.

A lot of people weren't happy with the way the police officers dealt with the situation. One user wrote online, "People have a right to be in the fresh air too, prisoners in their own home! If you have no symptoms for weeks & stay sat away from people then Where's the danger?!"

Many felt that because the beach was empty, they weren't doing any harm.

"If they were from the same household - they weren't hurting anyone, the beach was empty, they were the only ones on there - if it was crowded then is wrong what they are doing," another user wrote.

But others were less sympathetic.

"The fact is having a bbq is neither essential nor exercise, therefore, rules broken. As someone who HAS to remain inside for twelve weeks, I find it unbelievable that people are so thick in this day and age. I know first hand how hard this is. Just for someone else’s sake, maybe even someone else’s life, stay home unless you have NO choice but to go out," one angry user wrote.

Many feel it is completely unfair that some people feel they can do as they please whilst the rest continue to self-isolate...

"Why do people think it’s acceptable to “have a day at the beach" pretending it’s their 1hr daily activity? The rest of us are not self-isolating so you get to enjoy the beach to yourself! STAY AT HOME! What makes you so bloody special!"

Watch the footage for yourselves here...

And keep scrolling for the most recent lockdown updates...