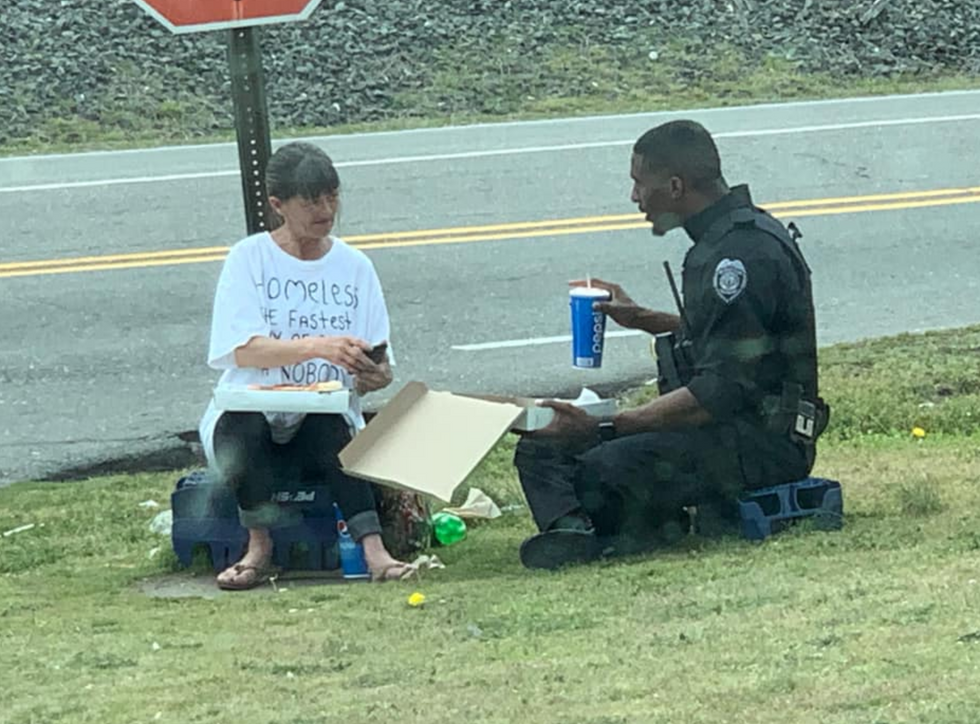 After appalling images surfaced from Mobile, Alabama, of two police officers treating the homeless almost as if they're subhuman, we're glad to hear a story like this one. A police officer decided to sit with a homeless woman and share a pizza together.

Keep scrolling to see why this story is so important for society...

A homeless person may even be invited to sit down and enjoy their food like any other normal person as you'll see later.

But things are never that easy for some people...

One police force, from Mobile, Alabama, seems to have quite a different idea about how to respect other human beings and when we heard the news, we were all left shocked.

They're a great (and cost-effective) way to help them communicate with a world that just wants to ignore them.

But, for the police in Mobile?

Well, these signs gave them a pretty horrific inspiration.

However, these officers decided to make signs they had confiscated into a "quilt."

And to make matters worse? Well, the 2 officers decided to post the image of their creation on social media, for the whole world to see.

But, as everyone should always remember - the internet is forever. The photo was quickly screengrabbed and shared numerous times on Twitter which depicted the police force in a negative light.

However, things have recently taken a turn for the better when this story hit the headlines...

Officer Michael Rivers has been working in the Goldsboro Police Department in North Carolina for the past 9 years.

And over that time, he has gotten to know some of the locals...

However, on Wednesday, he stumbled across a woman he had never seen before.

She was sat on the floor near a lampost...

But it was her shirt that caught his eye first. It said the words: "Homeless. The fastest way of becoming a nobody."

He was in his police car but the windows were down so they both greeted each other.

Even though Officer Rivers initially drove away, something kept pulling him back to the woman.

The officer explained why to CNN:

So, that's when he took action.

He went into the nearest pizza shop and grabbed a pepperoni and cheese pizza and went back to where she was sat.

And they both shared it while having a conversation.

The officer said the conversation was even better than the pizza so he ended up staying with her for the entirety of his lunch break and the whole moment was captured by a passerby.

The photo was then shared on Facebook by her husband.

"Law enforcement does so much for our community, with a lot of it going unnoticed," Chris Barnes said in his caption. Since then, the post has received over 3,000 shares.

During their conversation, Michelle, the homeless woman, told Officer Rivers about her life.

She mentioned how she has a twelve-year-old daughter who is battling liver disease and is currently in foster care. She also told him how her husband was homeless and they both lived on the streets.

And that's what made the police officer realize that homeless people are often shunned...

No one ever wonders how they came to be in the situation and it's the sad reality of our society. That's why Officer Rivers takes it upon himself to make sure he "blesses" someone's life in any way that he can. If you want to read more wholesome stories, keep scrolling...