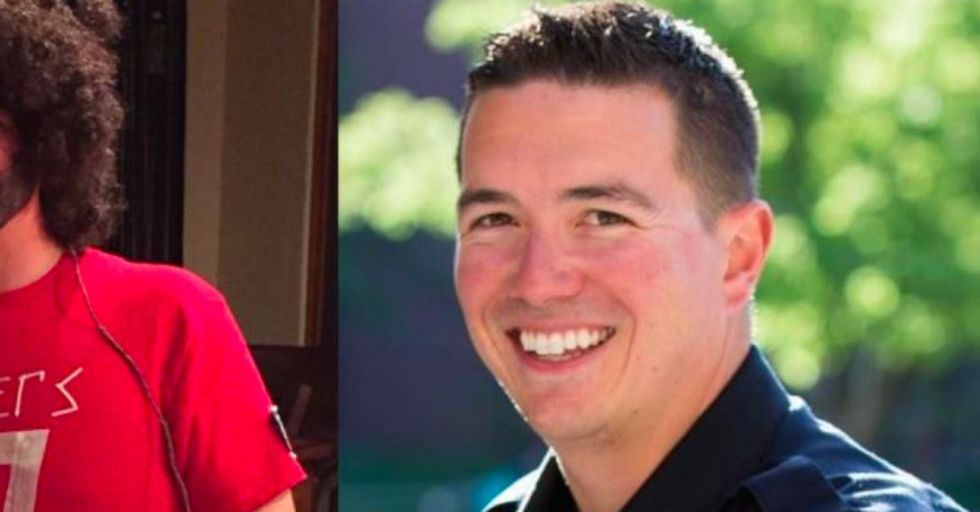 A campus police officer at the University of Nevada, Reno, dressed up as Colin Kaepernick for Halloween, sparking outrage and prompting an apology for what many perceived to be an entirely inappropriate and racist costume. People who choose to throw decency to the wind and dress up in controversial costumes: What is going through your mind? Do you think it's funny? Because it's not. It's beyond disrespectful. There are so many unoffensive things you could and should be for Halloween instead. Why not dress up as a non-racist? That's clearly a departure. Unfortunately, this police officer wasn't the only one who decided Kaep was an acceptable costume this year for Halloween.

Colin Kaepernick is engaged in a significant social protest to fight racial injustice and police brutality — he's not a joke and he's not doing it for attention. This is a public figure, a police officer, a member of the very group Kaepernick is protesting, who decided to mock a black man for fighting for his rights.

This obviously wasn't going to go over well. This picture of the offensive getup was circulated around the Reno campus, and students were outraged.

According to the Reno Gazette Journal, tensions on the UNR campus were already high due to an investigation into an officer who said to a graduate student during a routine traffic stop, "I'm just going to shoot him if this goes sideways because f*** that."

While the police officer's costume was clearly inappropriate and added to the emotional strain on campus, UNR would not name the officer and said no action will be taken.

University spokeswoman Kerri Garcia told the Reno Gazette Journal, "As insensitive and inappropriate as this is, we have no policy that would dictate any disciplinary action." Adam Garcia, the Assistant Vice President and Director of the university's police services offered a statement of apology, but that seems to be as far as the school is willing to go. "To regain the trust of our students, and in particular those of color, will be a challenge and will be a priority through continued education, training, and conversation," he wrote.

Now to South Dakota, where a white man donned blackface for his offensive Colin Kaepernick costume this year. The photo was shared on social media, and the man, identified as South Dakota State University student Cole Paulson, has apologized.

Paulson told the Argus Leader that he feels "terrible" for wearing blackface and said he had no racist intentions. "I will be completely honest and tell you I was ignorant to the fact as to painting my face like that was racist," Paulson said. "It was in no way my intention to offend the African American community, and I have read many articles and documents since to educate myself on why it was wrong of me to do what I did."

The Shreveport Times reported that the casino is accusing people of doctoring photos to suggest that the man who won the contest for the Kaepernick costume was wearing blackface when he indeed was not. Blackface or not, the man's costume was entirely offensive. His jersey said "Krapperdick," and his outfit included an adult diaper and a fake body dressed as a soldier with a sign around its neck that said, "I stand." The lesson here: Don't be racist. And if you're racist, stop it. Don't wear a costume that's basically a sign that says, "I am racist."