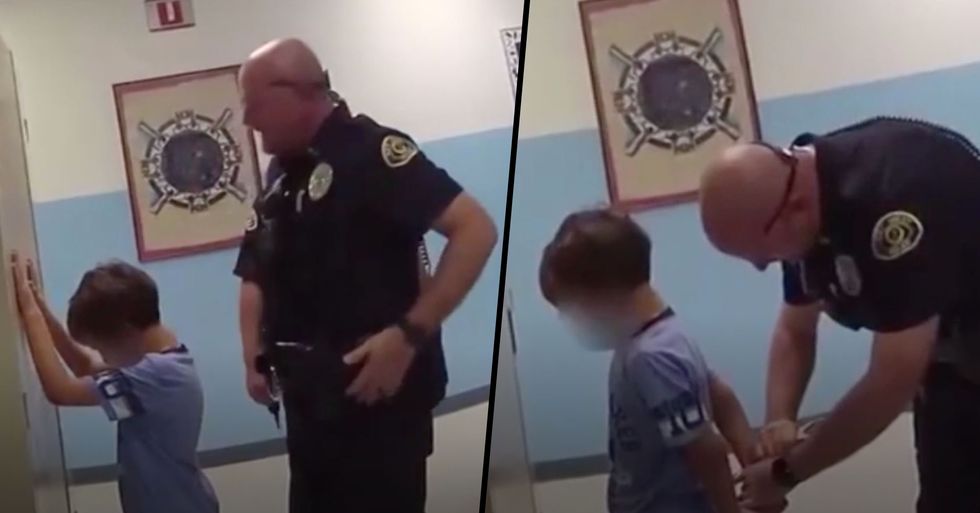 Shocking footage has emerged of police putting an eight-year-old boy into handcuffs and taking him to jail...

An 8-year-old boy has been filmed being handcuffed.

And it's truly shocked the internet.

And prisons in the U.S. are especially bad.

And the statistics are pretty scary to see...

According to PrisonPolicy.org, the reasons for the largest rates of incarceration fall under the category of violent crimes including assault, robbery, and rape.

And now, amid the ongoing medical pandemic, things have been even worse.

While some inmates have been lucky enough to get an early release, others have been put under much more stressful situations.

The potentially deadly virus can be spread ridiculously easily...

And prisoners, who are forced to share cells with a number of different inmates, are at a huge risk of contracting the virus themselves.

So far, we have been left to simply wonder what conditions behind our jail walls must be like.

It truly must be a harrowing experience.

Other statistics have shown that there are many people in state prisons that have been convicted for less violent crimes.

And don't even get us started on unfair conviction rates. That's a whole other story.

But the moral of the story is that people can always change their ways.

The word "prisoner" conjures up lots of negative connotations, usually of people who have found themselves on the wrong path in life.

But no one expects to see an eight-year-old being put into handcuffs and taken to jail...

But that's exactly what happened in newly resurfaced footage

The footage that emerged today was from a 2018 incident.

The clip shows police officers in Key West trying to handcuff a crying 8-year-old boy after an incident at his elementary school.

According to the arrest report, police were called to Gerald Adams Elementary, after the child punched a teacher in the chest.

According to the arrest report, the boy’s teacher said he was not sitting properly in his cafeteria bench seat. The teacher asked him on several occasions to sit down out of concerns for his safety, however he would not comply.

He then reportedly told the teacher "My mom is going to beat your a--," before punching her with his right hand. After being called in, officers proceeded to "arrest" the boy on a battery charge.

During the clip, obtained via body cam footage, the 2 officers tell the boy, who is crying hysterically, that he’s “going to jail."

As one officer puts the handcuffs on him, the other officer says something regarding the size of cuffs, saying that they are probably not going to fit. An officer behind the camera then says, “I don’t think so, either."

Before leaving the school...

The officer putting the handcuffs on the boy says: “You understand this is very serious, OK? I have that you had to put me into this position to do this. The thing about it is, you made a mistake. Now it’s time for you to learn about it and to grow from it, not repeat the same mistake again." They then proceeded to book the child into the juvenile justice facility in Key West.

And he completely condemned the way the officers tried to scare him.

The 2018 footage was unearthed and posted to Twitter today.

He says that his officers "did not do anything wrong."

“Based on the report, standard operating procedures were followed," he said.

But not everyone agrees.

@JulianCastro Everybody and their mother would get sued if this happened to my child!
— Amado Cruz (@Amado Cruz)1597068019.0

Many felt the stunt was excessive and would have been traumatizing for the child.

While of course, the child should have been punished by the school...

Many felt that this was too much, with some going as far as to brand it "psychological abuse."

The majority of people completely disagreed with the stunt.

You can watch the shocking footage below:

Unbelievable. Police in Key West tried to put an 8-year-old boy in handcuffs and transport him to jail to “scare h… https://t.co/kvcBCRVWvW
— Julián Castro (@Julián Castro)1597067882.0

For more like this, scroll on to read about the cops who arrested children aged 6, 12, and 14 facedown with handcuffs...