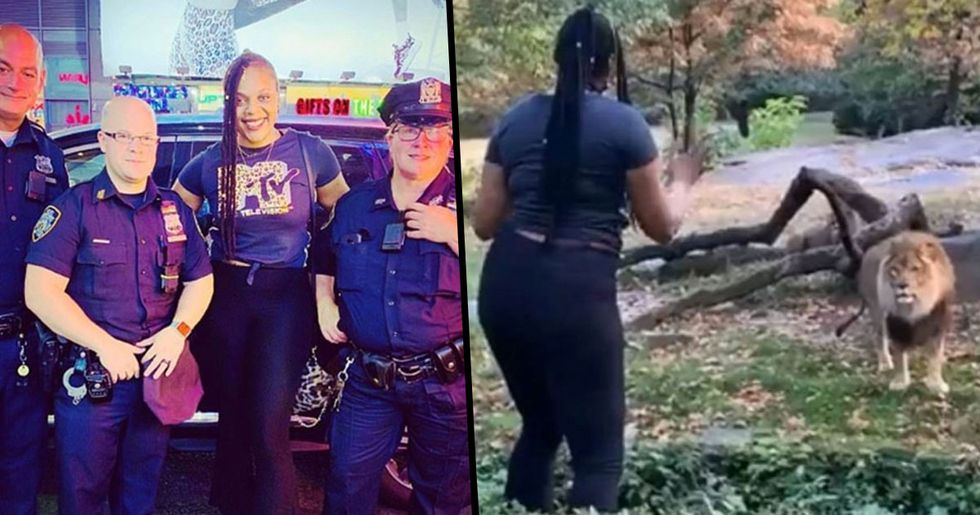 In yet another reminder as to why we're doomed as a species, a woman has been filmed voluntarily climbing into the enclosure of an African lion at the Bronx Zoo.

The woman, who is yet to be identified, was filmed by horrified onlookers as she climbed over the barrier and strode confidently into the lion's enclosure. She then proceeded to have a tense stand-off with the animal, where she taunted it by waving her arms about and performing mocking dance moves.

By some miracle, however, neither the woman or the lion were hurt.

And, since the video was posted to Instagram, it quickly went viral and has sparked outrage worldwide. Keep scrolling to watch the footage and to hear more about the story, including the reason that she may have been driven to do her insane stunt.

The incident happened at the Bronx Zoo.

Located in the heart of New York, the Bronx Zoo is one of the largest zoos in the United States by area, comprising a staggering 265 acres of parklands and naturalistic habitats.

The zoo plays home to a number of different animals.

Guests can come and view over 600 different species from around the globe, all of which are currently endangered or extinct in the wild.

But the most popular attraction?

It's the African lion, of course.

As it stands, the African lion is classified as "vulnerable" in the wild.

Despite these majestic animals having no natural predators, lion numbers have plummeted by over 40% in the last three generations, due to loss of living space and conﬂict with humans.

So, heartbreakingly, they are most commonly seen in zoos and conservation centers.

Lions are the most social out of all the big cats...

So zoo visitors are quick to flock around their enclosures to watch them napping on the rocks or playing together.

And though they may be adorable to look at...

Lions are the kings of all predators and can be incredibly dangerous.

So you wouldn't want to find yourself in an enclosure with one of these beasts...

Well, most of us wouldn't. One woman apparently didn't take any of these dangers into consideration, because she actually climbed into the lion enclosure at the Bronx Zoo this week.

The footage was posted to Instagram by another guest...

And shows the woman walking, a little too confidently, might I add, into the lion's enclosure.

The woman then stands off with the lion.

After bypassing the wooden safety barrier, the woman is seen staring the lion in the eye as fellow visitors watch on in apprehension.

The poor lion seems quite perplexed by the whole thing...

And stands uncertainly as the intruder approaches.

Which is an obvious attempt to get some form of reaction out of the animal.

When the lion doesn't respond...

She opts to waving her arms about in the air. Does she want the lion to attack her?

The horrified guests watching on can be heard gasping at her actions. "She shouldn't be doing that," one woman can be heard saying in the clip. Another woman asked: "Is someone with her?"

Thankfully, the lion couldn't attack the woman even if it wanted to.

Because there is a large concrete moat filled with water within the enclosure which keeps the pair firmly separated.

Though be warned, it is infuriating to watch.

People in the comments were less than impressed.

And many noted how they wished the lion would have at least gotten a little bite in (a bit harsh, maybe...).

People have been calling for the woman to be arrested.

Because her thoughtless and, quite frankly, stupid actions could have resulted in another death of an already vulnerable species. (R.I.P Harambe).

There have been no reported arrests.

And the NYPD is yet to comment on the incident.

Though the Bronx Zoo have now spoken out.

The Bronx Zoo confirmed the incident to NBC New York, saying zoo staff received a report that a person had climbed over the safety barrier on Saturday.

They said: "This action was a serious violation and unlawful trespass that could have resulted in serious injury or death. Barriers and rules are in place to keep both visitors, staff, and animals safe."

"We have a zero-tolerance policy on trespass and violation of barriers."

And there has now been an update on the situation.

According to reports, the woman that jumped the fence had been smoking what looked to be a blunt before she had walked into the establishment.

A "wild" video had been posted on to her Instagram, which provided evidence for it.

In the video, she brags about how she is going to "**** around with mother nature." So, this incident seems to have been pre-mediated.

After taking a couple of puffs, she dances around before heading in...

It has not been confirmed what exactly she was smoking, but the leaf emoji in the caption is typically used to refer to weed. Yikes.

However, that doesn't excuse her behavior in any way, shape, or form.

I mean, that extra bit of  "courage" or whatever she was aiming for only catapulted her into a dangerous situation.

And even though she hasn't been arrested yet...

TMZ stated that the Wildlife Conservation Society filed an official report against her, pointing out that she was trespassing. However, there has not been any information about the current status of her arrest yet.

The bottom line is: People need to learn how to respect animals.

It really isn't difficult guys... Because it's our fault that these poor creatures' chances of survival are best in captivity anyway. Keep scrolling to read the story of some imbeciles who threw rocks at a sleeping panda, simply because they were bored.