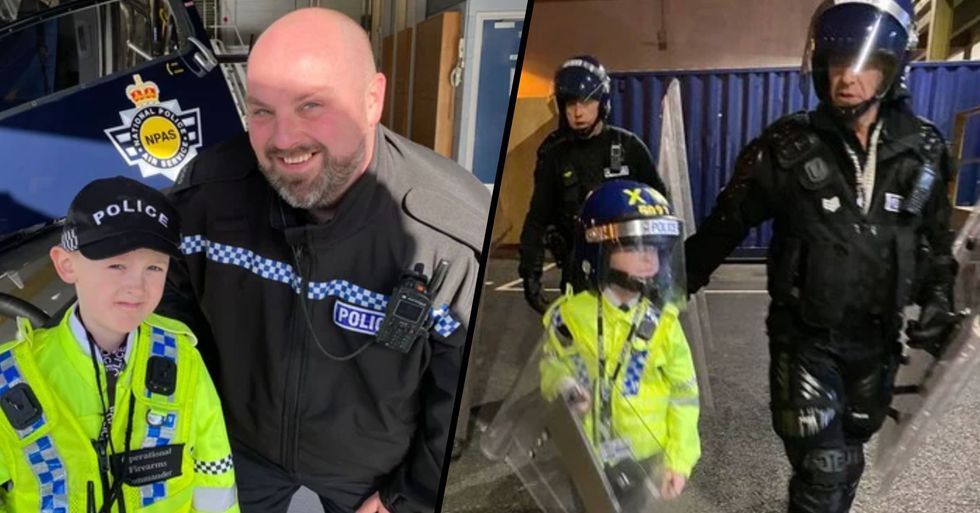 Cancer is a devastating and cruel disease that claims the lives of hundreds of thousands of Americans every year.

And, despite the millions of dollars that we have thrown into finding a cure for the deadly disease, we're still no closer ending cancer than we were all those years ago.

More and more children are suffering from the disease, but thankfully, there are organizations out there who work hard to make their lives a little bit easier.

Keep scrolling to learn about the little boy whose policing dream came true...

The disease is having devastating consequences on families all over the world...

There are ways to ease this painful battle with the disease...

And there are organizations out there who work tirelessly to help and cheer up children who are fighting cancer.

Make A Wish Foundation is one of these organizations...

via: Make A Wish UK

Make A Wish is based in the United Kingdom, and the charity works purely to help children who have been diagnosed with cancer.

Whether that's going on vacation, meeting a celebrity hero, having a bedroom makeover, or even starring in a movie... Make A Wish will work endlessly to make sure a child's wish comes true.

This wonderful charity can help reunite families during the hardest of times...

And they help create some unforgettable memories.

In 2018, the charity gave one little boy an experience he will never forget...

7-year-old Allan Harris, who is from Wales, needed surgery in his stomach after developing a soft tissue tumor called "rhabdomyosarcoma."

Thankfully, his surgery was a success...

But poor little Allan spent a lot of time in hospital receiving treatment, and Make A Wish wanted to treat him by granting his biggest wish.

Allan constantly dreams about being a police officer...

So Make A Wish organized a day out for Allan to visit the West Yorkshire police officers and spend the entire day fulfilling his police officer duties.

The officers at West Yorkshire Police dedicated their day to staging a fake arrest and house raid for the little boy.

He was even given his own uniform...

And the officers had an action-packed day planned for him, with the first task being a lesson teaching Allan how to dust for fingerprints.

Allan got to handcuff a suspect...

And he was even allowed to play the siren on the police motorbike.

But Allan's favorite part of the day was watching the police dog take down a suspect...

And the look on his little face says it all.

Afterward, he described his day out as "absolutely brilliant."

Make A Wish UK chief executive Jason Suckley said, "We have recently experienced a significant increase in the number of children turning to us for a wish – around 1,700 between July and November last year alone."

Watch the incredible footage from Allan's day out here...

Keep scrolling to see the adorable dance that a dad and his son did together when they found out the little boy was cancer-free...