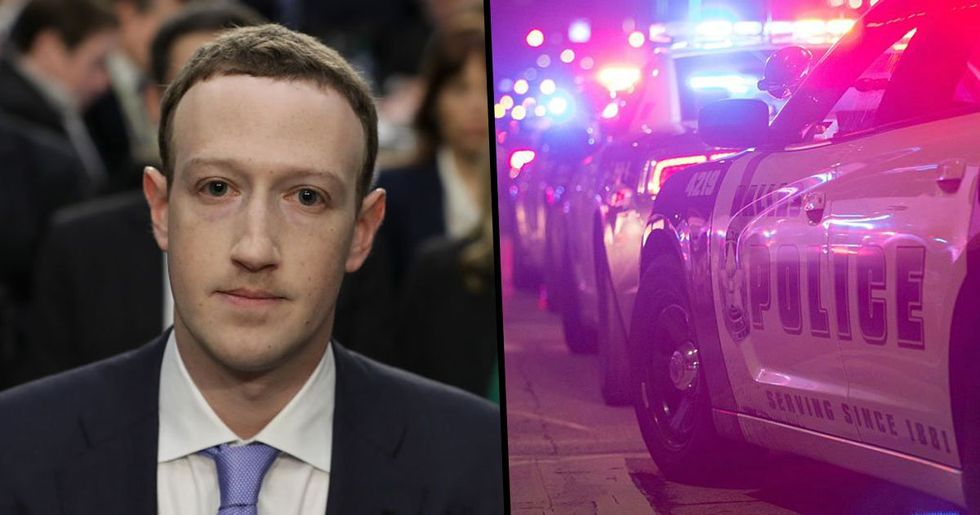 It's too easy to become overly reliant on social media. In fact, you can think you're immune to the obsession, and only realise that you're in too deep when what you crave is taken away.

Such was the experience of many social media users yesterday, as the world experienced downtime from some of the leading apps. Facebook, Instagram and other platforms stopped working for a significant period, and it's safe to say the world went mad. Many saw the loss of the two platforms as a signal of the end of days.

Most reacted in the expected way - primarily, taking to Twitter (the last social media giant standing) to voice their dismay. But some Facebook super-fans reportedly went a step further. According to a Twitter account for a police force in New Zealand, they'd received calls from anguished Facebook users asking for help and advice now the site was down. And their response to the crisis calls was pretty funny.

It's safe to say social media has pretty much taken over the world.

In spite of it only really starting in the last fifteen years, many of us now can't imagine life without a quick look at our various social media accounts. It's one of our most beloved time-wasting tactics.

Now, thanks to smartphones, we're never without our fix.

We can update our status, post a picture or reach out to our friends from pretty much anywhere in the world - which is pretty amazing, when you think about it.

Although there are downsides to our collective addiction.

Many fear that the constant connection to the wider world can lead us to neglect the relationships we should be nurturing closer to home. We can be connected to anyone, yet may end up feeling disconnected from everyone.

There are other issues with our addiction.

Many can start to feel overly reliant on assurance from social media - likes and comments on a platform can become a substitute for real-life validation.

In fact, there are many who fear social media.

Our societal reliance on online platforms is seen by some as a signal of what's going wrong in our society. Many seem to prize the virtual world over real life, which is quite a frightening concept.

Even in positive ways, social media has a permeating impact on our lives.

Even if you manage to avoid any emotional attachment to your social media accounts, they still can end up wasting a significant portion of your day.

It's safe to say we'd all be pretty lost without social media.

And although many of us are in denial about the depth of our need for these platforms, sometimes an event happens which brings the whole thing into startling focus.

Facebook is one of the leading social media platforms out there, and it's safe to say pretty much everyone has an account on the site.

But yesterday, users noticed something worrying.

Down Detector seems to show Facebook issues all over the world, particularly in U.S. and Western Europe.… https://t.co/PP03X7DQNv
— Eli Blumenthal (@Eli Blumenthal)1552496411.0

Using sites such as Down Detector, many quickly learned the issue wasn't personal. In fact, it seemed Facebook was going down all around the world.

Many were pretty furious about it.

When you become so used to something being reliably there for you, it can be something of a shock to the system when it's cruelly taken away without explanation.

People were unable to access anything on the site.

Instead, the were receiving various error messages, leaving them unable to get on with any of their important Facebook business. Many shared images of their errors online in the hopes of figuring out what was going on.

The site posted an explanation and an apology on Twitter, confirming that the site was down for everyone, and not just a select few.

Nonetheless, people were freaking out.

There's something about a worldwide issue that seems to induce mass hysteria. People were not only feeling lost without their Facebook fix, but seemed concerned as to the reasons behind the downtime.

We're focused on working to resolve the issue as soon as possible, but can confirm that the issue is not related to a DDoS attack.
— Facebook (@Facebook)1552503780.0

They insisted that the downtime was simply for site maintenance, and not a part of some wider conspiracy theory, as the internet had started to believe.

Once the panic subsided, people started going a different way.

Rather than being concerned that Facebook had stopped working, they started to experience frustration, which quickly turned into white-hot fury. They needed their social media platform, and needed it now!

But with the site itself unresponsive, people didn't know who to turn to.

Feeling abandoned by their social media platform, people knew they needed help - but just didn't know where to find it.

It seemed the whole world came to a halt.

Everyone was stuck, just waiting around on what to do next. Facebook was no help, and while other users could help lament the issue, they couldn't help take steps to actually solving it.

An extreme solution was needed.

So people decided that there was one source left to turn to. It was an emergency service - but Facebook going down was sort of an emergency, right?

But the police had other ideas.

One department, from Canterbury, New Zealand, actually took to Twitter to ask people to stop calling them about their Facebook issues. They promised there was nothing they could do about it, and that they were experiencing similar problems.

And it wasn't an isolated incident.

The South Australian State Emergency Service also begged Twitter users to stop contacting them about the Facebook downtime, saying they know about the issue and were unable to provide any help with it.

It does seem kind of obvious.

Calling the police for reasons totally unrelated to a crime is a little bit of an out-there response. But, we suppose, some just didn't know who to turn to!

People made jokes about the response.

It is kind of funny to imagine that people saw calling the police as the best course of action for their Facebook "emergency" - except for the fact that the loss of a social media app being considered an emergency is a little bit worrying.

Plus, we're sure the police had better things to be getting on with.

Like, how about solving crimes? While it seems people were calling the non-emergency police number, it's still slightly strange that Facebook users had thought to involve the police at all.

Elsewhere, Twitter had some excellent responses to the downtime.

Some brands grabbed the opportunity for some free viral marketing. Though funny, it could also be seen as a sign of the times that a diner has to remind people that they can still hang our with each other in real life.

The scenario fitted nicely into some of our most beloved meme formats, including this wonderful take on the "distracted boyfriend" image. It does seem Twitter has come out of the debacle on top.

Many realized how reliant we are on social media.

These comparisons between a day without Facebook and going back in time thousands of years speak to how innately we accept social media as a part of our daily lives.

For some, it was a wake up call.

It's too easy to end up mindlessly scrolling without ever really thinking about why you're doing it, or how you ended up there. With these platforms taken away, everyone got a clearer view of how much they were actually using them.

So perhaps the downtime was a good thing.

Maybe it taught us all a valuable lesson about how we've become to dependant on social media to fill up our days and make our lives feel normal. Or maybe it was an unwelcome break, and we're super happy to get back to business on the platforms. We'll see!