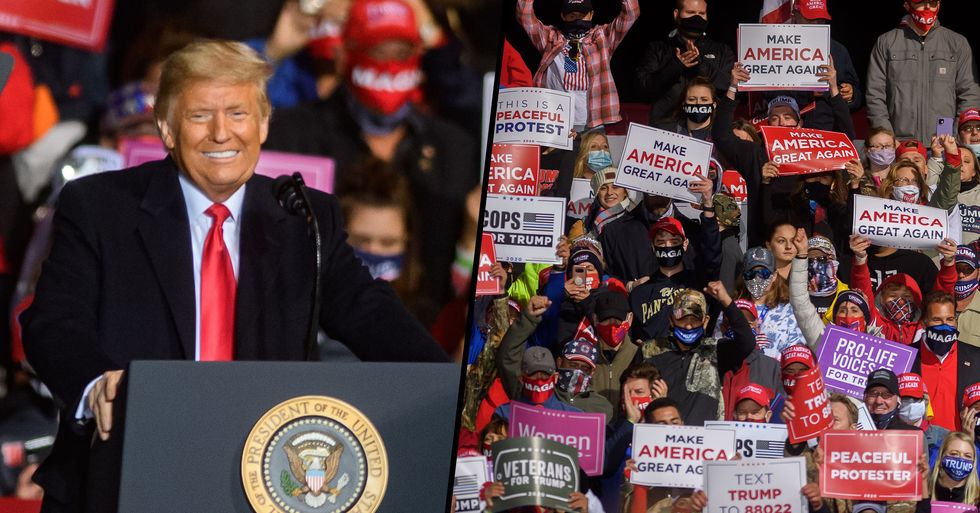 A poll has recently revealed that 56% of Americans think that they are better off now than they were in 2016. The findings also revealed that this is a record-breaking number and let me tell you, Joe Biden wasn't happy to hear the news...

As the all-important presidential elections loom above us...

Every single day seems to be a struggle to get through.

Given the current pandemic and the state of politics, it's a surprise the world hasn't imploded.

And as November 3rd gets closer, the polls are now out in full force too.

A recent one has revealed that 56% of Americans believe that they are better off now than they were in 2016.

And Donald Trump's current opponent, Joe Biden, was not happy upon finding out the news.

It seems as though millions of Americans still have faith.

12 million of them have already cast their vote for their next President according to some other recent data released by US Elections Project.

But who really knows what's going to happen in twenty days?

The responsibility of picking the correct leader is a tough one and with passionate opinions on both candidates, it's looking likely that this will be one tough battle.

But on the other hand, lots of angry and spiteful messages have been thrown at the pair following their diagnosis too.

Of course, if the president is still unwell...

He won't be able to take part in his campaign properly and bless his fans at rallies, not that they would care about getting infected anyway. And not to mention the highly anticipated second round of debates.

It was scheduled to take place tomorrow.

But it has been oficially canceled.

And it's probably for the best...

But the sudden removal of the event has not had a dramatic impact on the voting rates because, so far, 12 million Americans have already had their say.

This is according to recent data released by the US Elections Project, who have delved deeper into the statistics.

The results include both ballots cast in-person and absentee or mail-in ballots returned to local elections offices.

With 20 days to go, there is still a lot of time for other Americans to head down to their local polling station and vote.

But that wasn't the only statistic that has us shocked today...

Recently, the new Gallup poll revealed that 56% of Americans think that they are better off now than they were in 2016 under President Obama.

This is a record-breaking stat as the highest ever percentage used to be 47% under George W. Bush back in 2004.

Obama was at 45%, but that is nothing compared to the whopping 56% that voted this year saying they are better off than they were 4 years prior.

But when Joe Biden heard the news, he dismissed it as quickly as possible.

He was asked by WKRC: "Why should people who feel that they're better off today under a Trump administration vote for you?"

To which Biden replied:

"Well if they think that, they probably shouldn't." Then, referring to the incorrect stats, he added: "They think- 54 percent of the American people believe they're better off economically today than they were under our administration? Well, their memory is not very good, quite frankly." Ironic, huh?

And obviously, he had to take a quick swipe at his opponent in there too...

He said: 'And in addition to that, we have a president who doesn't share the values of most Americans. 'He's not very honest with people. He's flouting the conventions relative to public safety in terms of even now, not wearing a mask, a guy who has been a super spreader."

"But look, whatever they believe they should go out and vote. People should vote. Period."

That's some good advice. Please have your say on November 3rd. In other related news, see why our current President was booed while he was paying his respects to RBG...