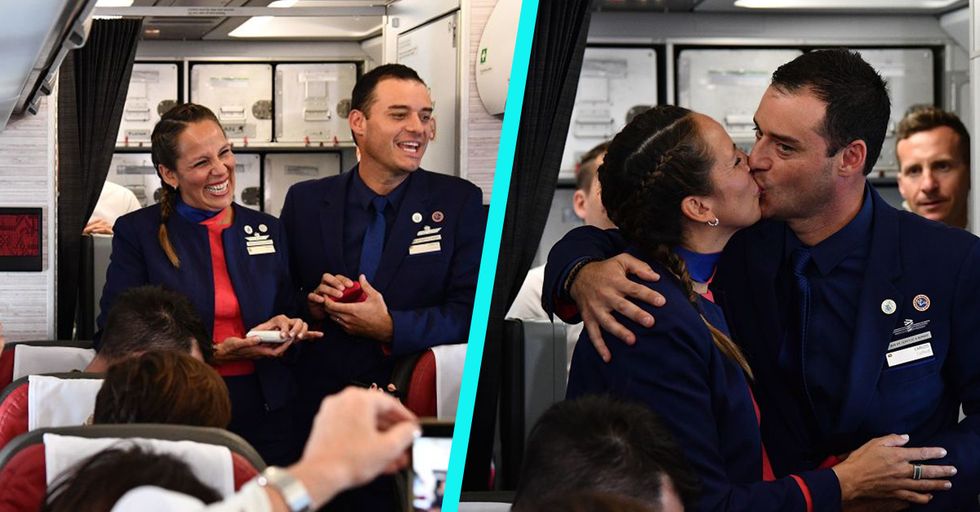 Getting married can be stressful. Sure, you're in love and can't wait to spend the rest of your life with your partner, but then the dread of planning comes into play. You've got menus and DJs and debates about whether you should invite your weird old uncle to the ceremony! It's a lot and most times, the romance can get sucked right out of it.

But then you hear stories of people getting married spontaneously and it's so beautiful you can hardly keep it together. Like these two flight attendants, who were married on the spot by Pope Francis, mid-flight. We hope you have your tissues ready for this adorable and perfectly spontaneous wedding story.

On Thursday, Pope Francis married a Chilean couple on a flight from Santiago to Iquique, Chile.

The couple has two children together, ages 3 and 6. They're both LATAM flight attendants, and decided to get hitched from over 30,000 feet in the air!

The couple has been together for eight years.

Paula Podest and Carlos Ciuffardi asked the pope for his blessing.

"We told him that we are husband and wife, that we have two daughters and that we would have loved to receive his blessing," Ciuffardi said.

Upon hearing this, the pope asked if the couple had been married in the church.

"All of a sudden he asked us if we were married in the church, too," Ciuffardi explained.  Hey, when the pope asks you that question, you answer! Though I would be a little stressed about it, quite honestly.

The couple explained that because of an earthquake that had destroyed their church in Chile, they had to cancel their ceremony.

Ummm, we can't fathom how amazing this is.

They even had a marriage license drawn up!

By a Vatican official, no less. Sometimes, it really is the simplest things that are the most beautiful. So has the pope done this before?

Nope! Pope Francis told them what a big deal this was.

“He told me it’s historic, that there has never before been a pope who married someone aboard a plane," Ciuffardi said.

There's a first for everything! We wonder if Pope Francis is going to try this out on his next flight...

The pope has some FEELINGS about marriage, y'all.

The pope gave them some advice as well...because, well, that's what all good popes do, right?

“The wedding rings shouldn’t be too tight, because they’ll torture you, but if they’re too loose, they’ll fall off. So we have to be careful."

That's really good advice, to be quite honest.

Imagine this being your parents' wedding story. How will anyone ever top that?

Anyway, we're going to be weeping for the rest of the day.

#PopeFrancis just married during the flight to #Iquique this couple of flight attendants! They were talking with th… https://t.co/JRYPkCotHt
— Antonio Spadaro (@Antonio Spadaro)1516281356.0

Also, they basically got paid to get married since they were on the clock, which is pretty amazing. Congrats to the "newlyweds"!