29 3D Graffiti Murals That Will Blow Your Mind | 22 Words 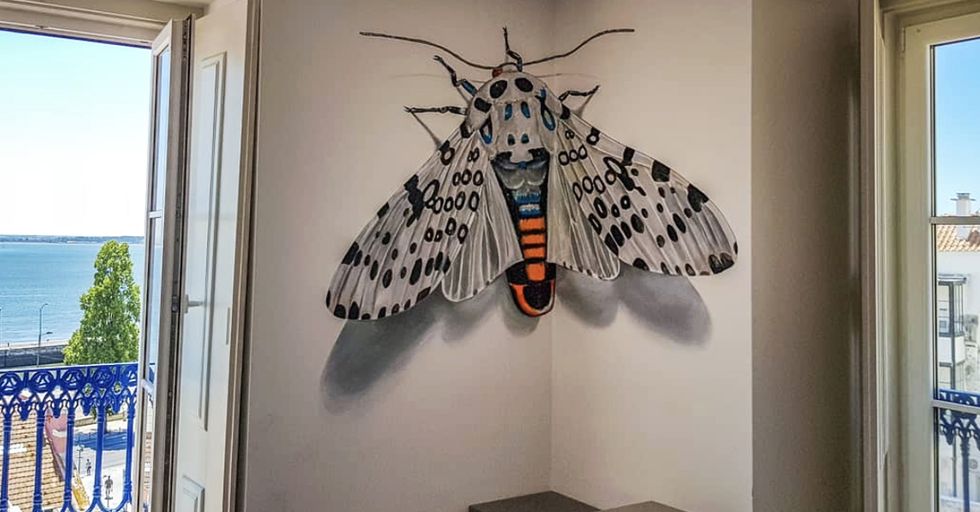 29 3D Graffiti Murals That Will Blow Your Mind

Graffiti means something a lot different than it did several years ago. What used to be considered a nuisance a hobby for reckless vandals, has been transformed and finally recognized as a valid and innovative art form. And, one of the best graffiti artists today is Sergio Odeith.

Odeith is from Portugal and has been creating graffiti murals since the '90s. His signature style is really special because he uses the space provided, unlike any other graffiti artist. He creates incredible 3D pictures using angles and shadows. The effect is mind-blowing, and Odeith has rightly gained international attention for his amazing works of art and has since flown all over the world to design murals in different cities. Much of his work centers around the macabre and creepy-crawly (giant spiders and other bugs, for example), on a giant scale. Take a look at some of his most impressive pieces of art.

Here Odeith is pictured next to one of his incredible murals.

As if this massive, detailed portrait wasn't impressive enough, just take a look through the next 29 pictures. You might want to sit down for this.

I mean, this is totally trippy. It makes me feel like I'm in Honey I Shrunk the Kids, and I love it.

You must be super good at twisting perspective to be able to create this underwater picture of an alligator. It's not actually underwater, guys!

That turtle is really sad because people are wasteful and throw their plastic bottles into the ocean. Stop doing that, people!

These giant rats on top of spray paint cans are probably as meta as Odeith gets in his work. Honestly, they're really cute. I would have one as a pet.

I have one question about this piece: How?! It's incredible. The metallic 3D letters are insane, not to mention the yellow neon stripe making its way through them.

Aw, look at that adorable little guy! I love his mohawk, it is so cute! I bet he's a huge cuddle bunny.

I don't know about you, but this looks like almost every person I know. Plugged in all the time, toggling between those three apps.

This is Odeith's signature. It's huge and 3D and massively impressive. I have trouble just writing in plain old bubble letters.

I don't know how he produces that metallic effect seen on his designs, but it is so stinkin' cool.

This guy looks pretty unhappy but maybe that's because he has a light shining right in his eyeballs! I mean, come on, have a little decency.

This colorful mural is so cool, and there's so much going on here that I don't know where to begin. Perhaps with the lionfish.

How does he create that effect, with the letters weaving in and out from behind a wall? Is the whole wall painted? I'm really having a hard time with this.

Something strange is bursting out of that spray paint can... I think it's Odeith's crazy imagination.

Writing on the wall

I think this is another tag with Odeith's name. It's a lot more elaborate and detailed than any other graffiti artist's tag I've seen.

Nothing to see here. Just a giant bear coming out of the wall wearing a crown and being super cool.

The most impressive aspect of this piece is the shadows. And the different angles of the letters. And everything else too.

This looks like something out of Men in Black. A giant alien bug trying to blend in with the wall saying something like, "You don't see me, Will Smith."

Speaking of bugs... This is a big one. I know that it's gigantic, but it also looks so real! How does he do it?

Look at this majestic beast just lounging around on a whirly metallic group of vines. So majestic.

This one is crazy. If you look at the hind leg of the rat, you can sort of see where the angle of his painting switches to accommodate for the perspective.

This is a wall of graffiti placed behind a painted pond, complete with fishies and a cute little duck. It doesn't get much more impressive than this.

I have trouble fitting an entire word on one line of poster board. Imagine the kind of skill it takes to make these letters all the same size.

Is it just me or do you also think Odeith should host one of those Instagram pop-up shops where people can take cool pictures? He would nail it.

That's a big bug. And it's shadow might even be spookier than the bug itself! It's so perfectly done.

For this one, Odeith wrote, "The mixture of weird textures and organic surfaces creates an interesting dialogue." I'll say!

That's the craziest before-and-after photo I have ever seen! I don't know what he did to achieve the texture of the skull, but it's so crazy!

Last but not least, a huge leopard moth on the wall. Share this with someone who appreciates good art!