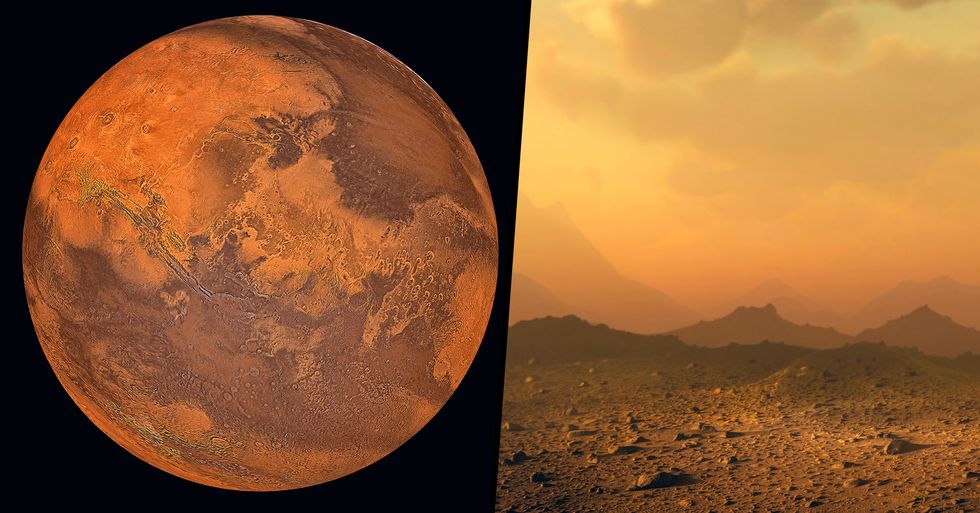 Possible Signs of Alien Life Have Been Discovered on Venus

One of the biggest mysteries of the universe is whether or not we're totally alone. And, although little green men in the sky do seem a little far-fetched, if you accept the concept of infinity, you have to believe that there's a possibility of life outside of what we know on Earth - although that's likely to be far, far away.

But new evidence suggests things may be a little closer to home than we thought...

For some of us, there's one big question that surrounds all aspects of life.

Whether or not aliens exist seems to plague the minds of certain members of society, and it's really the not knowing that keeps them so intrigued.

The idea of believing is undeniably attractive.

For many, the feeling that we aren't totally alone in the big universe can be rather a comforting point of view.

However, believing in aliens has something of a negative reputation.

Many who do believe in extraterrestrial beings tend to be painted as quacks and conspiracy theorists - which is actually kind of unfair.

But the question continues to plague some of us.

The worst part? It almost seems as though we'll never end up getting a straight answer to the question.

For believers, there's one area that particularly attracts attention.

The US Air facility, colloquially termed Area 51, is a disused facility that was likely once used for testing experimental air vehicles. The intense level of secrecy surrounding the area has led many to believe that there's something sketchy about it, however.

But some believe that the area isn't what it claims to be.

The intense level of secrecy surrounding the area has led many to believe that it's in some way related to alien life and unidentified flying objects.

For conspiracy theorists, it's something of a holy land.

Many others believe that it is an area of government secrets, but, likely, of a more boring and administrative variety.

There's an endless list of places people claim to have spotted an alien or two, but when an expert thinks there could be a possibility of life on other planets, it's time to listen.

Alien life might actually exist in our solar system, at least that's what one expert believes.

This is what she believes...

The moon's surface is covered with icy cold water, as well as producing an oxygen-filled atmosphere.

It's understandable why NASA has classified this mission as a high priority.

A professor of Planetary and Space Science at Liverpool Hope University, Monica Grady, backs up this theory suggesting the seas beneath the surface could contain marine wildlife similar to the octopuses we get on earth.

She also believes there could be life on Mars...

Although not the green, wide-eyed martians we're thinking. She believes there could be life beneath the surface, where it's protected from radiation.

Grady gave her opinion on the matter...

"When it comes to the prospects of life beyond Earth, it’s almost a racing certainty that there’s life beneath the ice on Europa. Elsewhere, if there’s going to be life on Mars, it’s going to be under the surface of the planet. There you’re protected from solar radiation. And that means there’s the possibility of ice remaining in the pores of the rocks, which could act as a source of water."

"If there is something on Mars, it’s likely to be very small-bacteria. But I think we’ve got a better chance of having slightly higher forms of life on Europa, perhaps similar to the intelligence of an octopus."

Last June something incredible was spotted.

NASA's Hubble Space Telescope found sodium chloride - which is salt to you and me - on Europa's surface.

Below the moon's frozen surface lies something fascinating.

The icy seawater has the ideal set up for life to thrive.

Grady explains her thoughts on life beyond the Milky Way...

"Our solar system is not a particularly special planetary system, as far as we know, and we still haven’t explored all the stars in the galaxy. But I think it’s highly likely there will be life elsewhere – and I think it’s highly likely they’ll be made of the same elements. Humans evolved from little furry mammals that got the opportunity to evolve because the dinosaurs were killed by an asteroid impact." "That is probably not going to happen on every planet – but it’s at least possible based purely on a statistical argument. Whether we will ever be able to contact extraterrestrial life is anyone’s guess, purely because the distances are just too huge."

Grady added that we could in fact be all alone out here.

"There’s always the chance that, within our solar system, we could be the only forms of intelligent life. If there’s only us, then we have a duty to protect the planet."

And now, another planet's name has come into the mix.

Possible life has been discovered on Venus today!

Aliens! On Venus! Maybe. Still maybe not. But something very strange is going on either way. https://t.co/jXyJmB5UZr
— Andrew Griffin (@Andrew Griffin)1600096799.0

The reason for the possibility of aliens?

Well, it's all down to a particular gas in the atmosphere.

The gas in question is called phosphine.

And the reason it suggests alien life? Well, because there's no explanation for its presence.

It's one of the most foul-smelling gases out there.

And because of the ways in which it comes to be, it is thought to be an excellent indication of life.

Phosphine in any quantity is often thought of as a sign of living organisms.

Which is what makes its appearance on Venus so exciting!

The surface of Venus is very hot and acidic.

But it is thought life could potentially prosper higher up in the cloud layers.

The gases in the clouds are acidic, and so would destroy phosphine very quickly.

This means the fact of its discovery suggests a constant means of production!

In fact, the paper behind the discovery claims it "is not robust evidence for life, only for anomalous and unexplained chemistry."

"Either phosphine is produced by some sort of chemical or geological process that no-one knows about – or there could be a biological reason."

"Our study isn't conclusive that this is evidence of life. However, what is exciting about it is that we've found this rare gas in the upper atmosphere of Venus."

"It's a step on the way to potentially the discovery of life of some kind in the upper atmosphere of Venus."

"But we have many, many more steps to go before we can say there's life on Venus." Want more alien news? Scroll on...