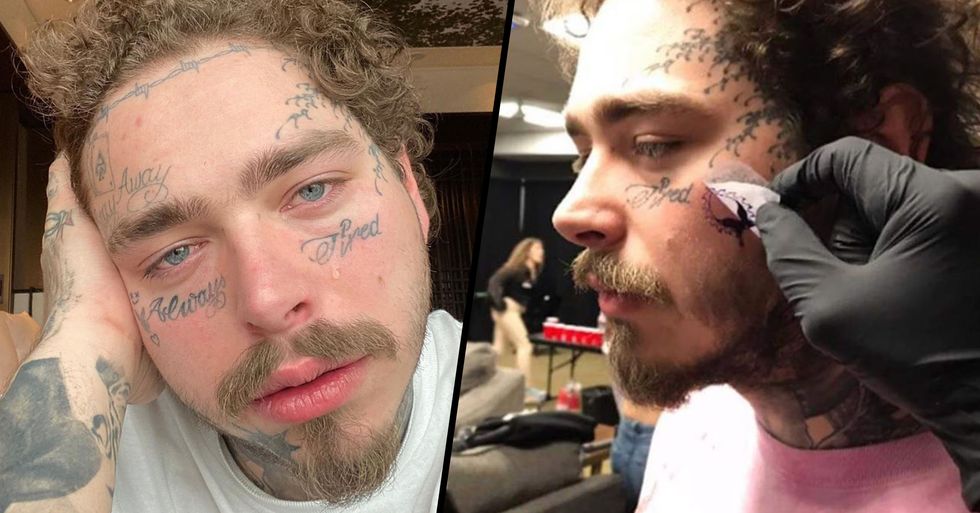 It's probably the latter. The rapper is notorious for his heavily tattooed appearance and, even after welcoming the new year 2020 with a new face tattoo, Posty's gone out and got another one! Keep scrolling to see it...

It's been one hell of a decade for Post Malone.

His music has been a roaring success.

He's won a handful of awards, too.

His bizarre new choice of ink sparked a lot of controversy...

And his explanation for the puzzling words was nothing short of fantastic.

He just wanted to annoy his mom. He later added about his tattoos, “Anything to piss my mom off."

But the under-eye tattoos can't have annoyed his mom too much...

Because he's now gone and got himself another face tattoo.

And this one may be the worst one yet...

I wonder what he was thinking when he got a saw with blood dripping from it tattooed on the top of his cheekbone?

The new tat was revealed by Junction City Tattoo's Ruben Reza on Instagram.

That must have been painful...

I know Posty's made some pretty bad decisions when it comes to tattoos...

But this one is probably up there with the hand holding a flail which he has dangling from his hairline to the bottom of the right side of his face.

If you're in the mood to read more about bad tattoos, then keep scrolling.

These people decided to venture out into other languages and tattoo the wrong phrases onto their bodies... We couldn't help but laugh though...