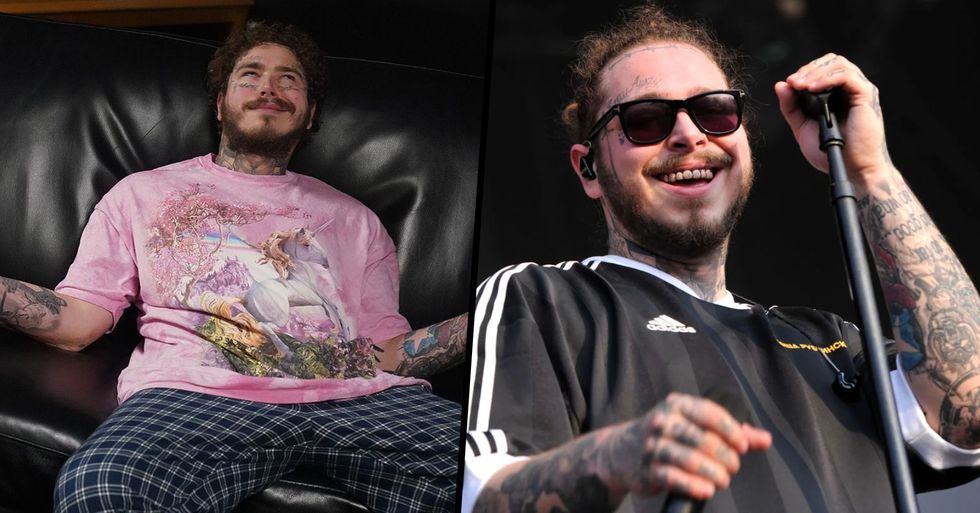 It's been one hell of a decade for Post Malone.

His music has been a roaring success.

He's won a handful of awards, too.

His bizarre new choice of ink sparked a lot of controversy...

His fresh ink turned him into somewhat of a meme...

And his explanation for the puzzling words was nothing short of fantastic.

He just wanted to annoy his mom. He later added about his tattoos, “Anything to piss my mom off."

But the under-eye tattoos can't have annoyed his mom too much...

Because he's now gone and got himself another face tattoo.

Many people were taken back at the appearance of his new ink.

When will he stop?! Many social media users were quick to slam the rapper for his "reckless" tattoo, and some noted that he has "ruined a beautiful face."

But some were simply inspired.

Is there even room for any more ink on the rapper's face?

Because the rapper is the proud new owner of a rather menacing looking gauntlet holding onto a ball and chain that snakes down the side of his face. Post's tattoo artist, Kyle Hediger, shared a photo of the fresh ink, writing, "Last tattoo of 2019. Gauntlet on the baby boy @postmalone love u. 2020 is going to be next level. Love you all."

The rapper posed for a mirror selfie, telling his 19.5 million Instagram followers to have a "good ass new year." Post is a human canvas now, so it's difficult to picture what he'd look like without his heavily inked exterior. Well, someone has given us a glimpse into what he could look like if he had never had any of his tattoos, all thanks to a little bit of photoshop. Keep scrolling to see the full video...