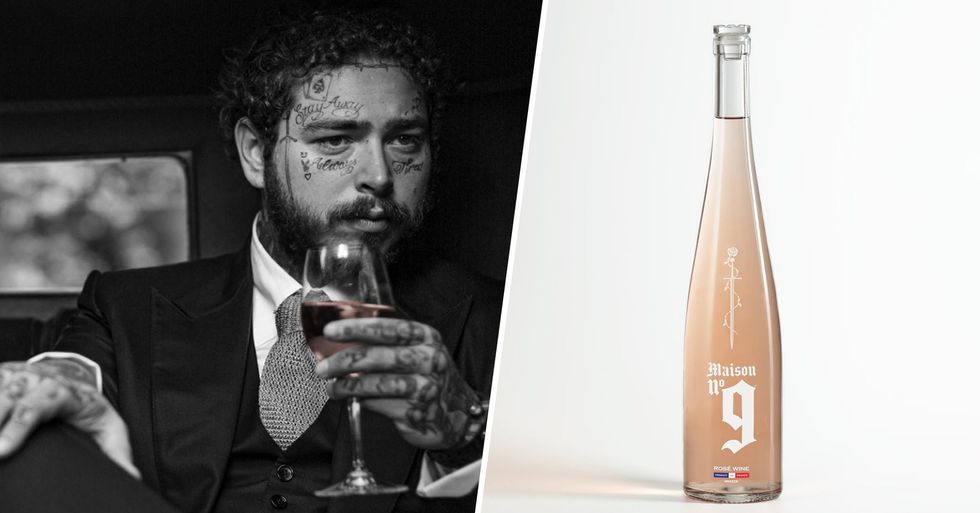 Post Malone has made a name for himself as a (very tattooed) rapper, but this week, fans have been left shocked after hearing his new business venture, rosé wine.

The rapper has bagged 2 American Music Awards, a Billboard Music Award, and an MTV Video Music Award, which is a pretty impressive feat considering he only rose to fame 2 years ago.

But this week, Post has hit the headlines for an entirely unexpected reason...

As he's releasing his own rosé wine.

Yes, really. You did read that right.

We know what our new favorite summer drink is going to be.

He's launching his own French rosé called Maison No. 9.

A name that was inspired by his favorite tarot card, the Nine of Swords.

The new business venture is a partnership with friend and entrepreneur James Morrissey, of Global Brand Equities.

And also Dre London who is a longtime music manager and founder of London Entertainment.

The idea came around after the 3 friends chatted about it over dinner one night.

Next thing they knew they were visiting the vineyard in Provence, just days later.

No doubt they had lots of fun sampling over 50 wines before coming up with the perfect blend.

A blend that is described as "provencal pink" in color, with aromas of “ripe pineapple, pear, and strawberry."

In a press release for the wine Post said: "Rosé is for when you want to get a little fancy."

Cosmopolitan reported that he also added, "It’s a nice switch-up and I have been thinking about doing my own wine for a while."

"It was great to work with Global Brand Equities because they saw the vision and we got to do some super-cool stuff. Maison No. 9 goes down smooth, and you’re all going to love it!"

And do you know what makes this even better?

We don't have to wait long for it, as it will be available in June.

It will be available to purchase nationwide both online and in stores and will come in 3 different sizes. Prices will range from $21.99 to $89.99.

We shall be sipping it in the sun in no time.