His reason for the 'Always Tired' tattoo is hilarious. | 22 Words 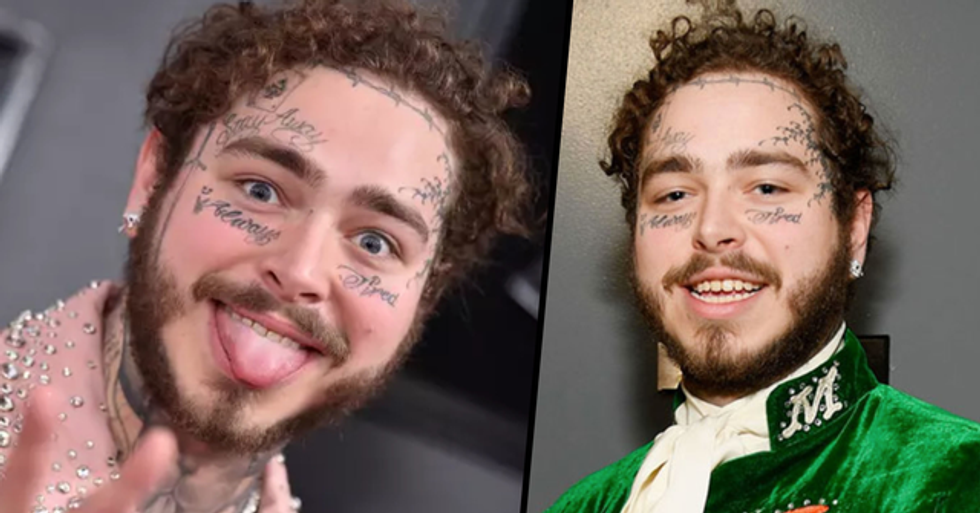 What's the first thing that springs to mind when you think of Post Malone? Is it his music? Nope. Is it his love-life? Nope, not that either.

Let me guess, it's probably his heavily tattooed face and curly mullet hair doo. Am I right?

Well now, the seemingly impossible has happened... We've been offered a glorious insight into an untattooed, freshly-trimmed Post Malone thanks to Mitchell Wiggs.

Keep scrolling to see the pics that leave the Post we all know and love completely unrecognizable.

But now, we have been given a glimpse into what Post could look like without his heavily tattooed exterior...

YouTuber, and expert photoshopper, Mitchell Wiggs removed his face tats and also smoothed out his signature curly hair, instead opting for a neat short back and sides. Not very Post Malone, is it?

Wiggs begins to painstakingly remove Post's tattoos one by one...

By highlighting them and smoothing them out with a skin-colored pen tool.

It is a very long process...

Obviously. Have you not seen his face?

So. Many. Face. Tattoos.

Why do you hate your mother so much, Post?

Once the face tats were finally sorted...

It was time to move on to that out-of-control mane of his.

After his hair was cropped out, however...

It looked a little bit odd and unnatural, to say the least.

So, obviously, Thomas Haden Church was brought in.

And his forehead was cut and cropped out to use on Post Malone's. There's a sentence I never thought I'd say...

But everything on Photoshop does at first, doesn't it? The aim of the bizarre hair transplant was to use Church's wonderful hairline to blend into Malone's not-so-wonderful hairline. Does that make sense?

The finished product is simply dazzling.

Hey, a Post Malone with Thomas Haden Church's hairline is something I can definitely get on board with.

You can watch the full transformation here.

And it's needless to say that Post looks completely unrecognizable. This guy truly is a Photoshop genius! On a slightly unrelated topic, do you think he'll be able to transform Tinder profiles? Asking for a friend...