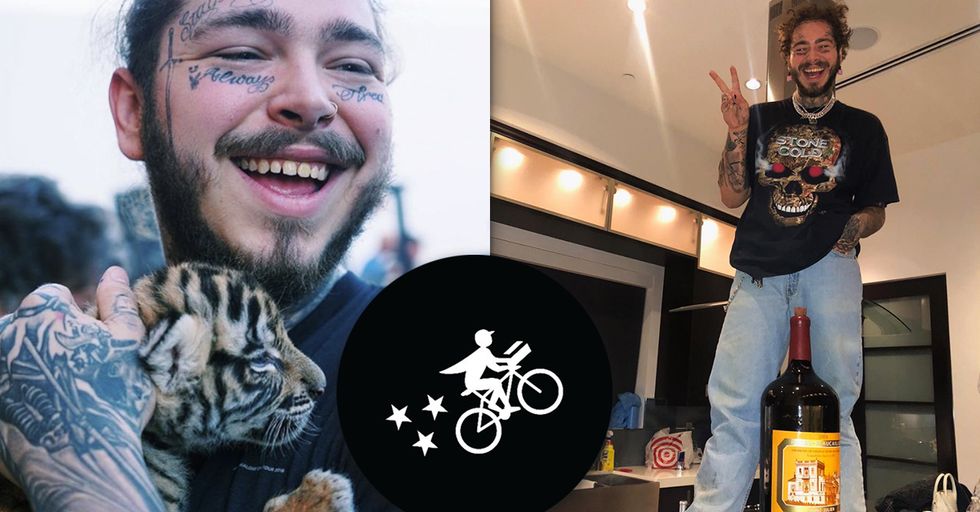 Post Malone Spent $40,000 on Postmates in the Last Year

Ah, the lifestyles of the rich and the famous! Celebrities are a different species. They're simply not from this world. They have better clothes, houses, cars, and access to everything. Meanwhile, down on earth, us normal people are swimming in student loan debt and wondering how we can afford a SoulCycle class.

The stress is real!

Despite all the tabloid magazines that try and convince us mere mortals that celebrities are like us, the fact of the matter is that they aren't. At all. They couldn't be further from us!

Which is why the world seemed confused recently when it was revealed that rapper and musician, Post Malone, did something crazy. It was reported that over the past year, Malone ordered over $40,000 worth of food from Postmates.

HOW DOES SOMEONE DO THAT? HOW?

Sure, his schedule is insanely busy, and he's on the road a lot, but that amount of money seems ridiculous. He's had over 660 deliveries.

Can you imagine spending that much?

That's a lot of, "Your Postmate is on their way" texts to receive.

Post Malone is going to be on a new Postmates series called "The Receipt."

Celebrities will share the strange things they've ordered and their faves from the food courier site. Honestly? I want to know what celebs are ordering off of Postmates, so I'm here for this series.

As he is pictured here, with a giant bottle of wine. He knows how to live it up.

He parties with other celebs a lot.

Who knew that Jimmy Fallon and Post Malone were friends.

He cuddles baby tigers, which is a normal thing to do.

Name a cuter picture. I'll wait for it.

He knows how to rock baby bangs like nobody's business.

We stand for a man who isn't afraid to rock some bangs! Can you say "fashion icon?"

He's also had some pretty scary and crazy times. Like when his private jet had a mechanical failure.

Back in August, Post was flying on a private jet. Upon takeoff, two of the plane's tires completely exploded as the plane was already in the air.

Ummm, I would've been terrified.

The private jet had to fly around for hours and hours before they could figure out a way to safely land. But Post's wild luck doesn't stop there.

A few weeks later he was in a scary car crash.

Post Malone's Bentley crashed through a fence after hitting another car. What at the odds of that happening?

Those are some crazy back-to-back events.

But Post is still living his best life, thank goodness.

Which includes him continuing to cuddle animals.

Why is this picture so bizarrely precious? Why am I attracted to Post Malone? It's all so confusing.

That's a normal thing for someone to do, especially Post Malone.

This is a crazy car he drives.

If someone were like, "What kind of car do you think Post Malone drives?" this would be my answer.

At this point, he would look naked without them. They're all a part of his identity now.

Here's another one of his fancy cars.

When you're famous, you have to drive cars that cost more than a house, right?

He was born on the fourth of July, which makes sense if you think about it.

It just fits him, you know? There's really no rhyme or reason, but it works.

He used to be in a metal band.

What a world we live in! I wonder if they keep in touch?

He chills in post-apocalyptic looking bathtubs.

Celebrities are just like us, remember? Who hasn't done this?

It makes sense since he has a plan to build an apocalypse shelter.

He explained that he felt there is "impending doom" in the world and purchased a million dollar "bunker" in Utah. He also wants to do cowboy stuff there whatever that means.

The man seems to love animals.

Our hearts are melting! It'd be great if Posty just posted pictures of himself and animals and nothing else.

He can pull of Christmas colors like no one else.

'Tis the season, Post! This guy is one of a kind.

He once opened for Justin Bieber on tour.

Post also knows how to rock a bolo tie.

It takes a special kind of person to be able to pull this off, and Post does it with flying colors.

Which isn't surprising since he's young, rich and famous; It's the perfect recipe for a wild time.

But still, the craziest thing Post has ever done is spend $40,000 on Postmates.

He can go on to win all of the awards and create all of the hits, but he will never live this down.

Seriously, who spends that much?

His legacy shall remain one of frivolous Postmates spending.

Sure, he goes to wild parties and his music is constantly on the radio.

But the fact that he spent that much on Postmates food? That makes him a legend. Share this with your friend who orders Postmates!