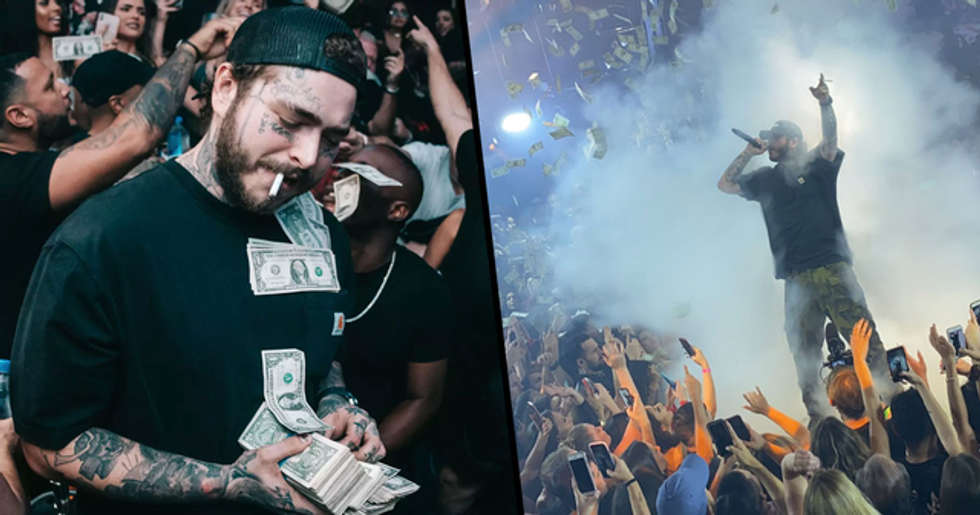 What's the first thing that springs to mind when you think of Post Malone? Let me guess, it's probably his heavily tattooed face and curly mullet hairdo. Am I right?

But alongside his iconic appearance, there's no denying Post has had a huge cultural impact that can't be denied. Be it his signature sound or his undeniably adorable personality, he's a verified internet sensation.

And Post's latest move has really got people talking. At a Miami gig this weekend, the rapper truly made it rain on the crowd - to the tune of a whopping fifty grand.

And since it began, he's already created one of the year's best memes after an enthusiastic fan flashed him from the crowd.

And this week, he played at an iconic venue.

E11EVEN Nightclub in Miami, Florida, is one of the best venues for wild live musical performances and visual spectacle.

It's clear the venue was excited.

The shared multiple social media posts in anticipation of Post's appearance - on what was surely a sold-out night.

And his performance was a resounding success.

Say what you like about Post's music, but he sure has a loyal legion of fans.

But there was one facet of the show that really gained a lot of attention.

Alongside playing hits like "Psycho" and "White Iverson," Post proved he truly is a "Rockstar," by bringing a watercooler of fifty thousand dollar bills.

And at the operative moment?

Post released the stash of cash up into the air and truly made it rain down on his crowd. It's a pretty impressive spectacle to watch.

That's not the only reason Post's appearance attracted attention.

According to Page Six, Post turned up with a massive entourage fit for a star of his caliber.

After parading a case full of sparklers and Bud Light, Post ended up doing beer bongs onstage - and any beer drinker will tell you, that's not the easiest feat.

All make for a pretty good show.

But none quite compare to making it rain to the tune of fifty thousand dollars. "The most epic night E11even has ever had. PERIOD. @postmalone is a certified rockstar," said one Instagram fan.

The crowd clearly loved it.

And many who weren't there claimed they had massive FOMO - and likely not just because of the songs they missed out on. We'd also be pro a few free dollar bills!

And for more hilarious Post Malone content, scroll on for the very best memes following his flashing incident. They're well worth a look - the memes, we mean.