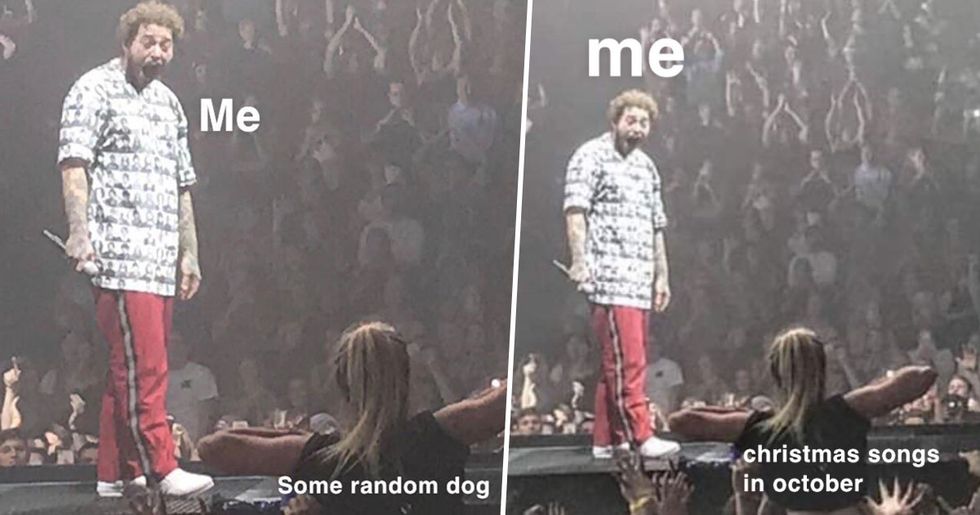 Post Malone's Reaction to Being Flashed Sparks a New Meme

Austin Richard Post, better known as Post Malone, is one of the biggest musicians working right now. And with such high levels of fame come certain ... perks.

At a recent concert, one enthusiastic Post Malone fan decided to try to grab his attention the best way she knew how - by lifting her shirt and screaming his name. And his reaction was the most Post Malone reaction you could possibly imagine.

Now the internet has jumped on the hilarious picture and has turned it into an excellent meme. For all the best ones, keep on reading.

Born in 1995, Austin Richard Post has basically taken over the music industry.

The musician has gained both critical acclaim and commercial success thanks to his blend of pop, rap, and trap, with surprisingly introspective lyrics.

He's sold over sixty million records in the U.S. alone.

And he doesn't seem set to slow down anytime soon.

His third studio album, Hollywood’s Bleeding, has just been released and features collabs with big names such as Travis Scott, Meek Mill, and SZA.

But his music isn't all Post is famous for.

The young star is well known for his lighthearted personality, and silly, self-deprecating sense of humor. And the latest images of the star prove just that.

First of all, this picture surfaced.

It depicted a rather ... passionate Post fan showing her ... appreciation for his music. And his reaction was the most Post Malone thing ever.

But that wasn't the only reason the picture was so great.

[Philosophical voice] aren't we all Post Malone getting flashed, in our own ways https://t.co/hZ7XN7XaTO
— Jdjssfksjskskskk (@Jdjssfksjskskskk)1569709484.0

It also seemed to apply to so many situations in life - and the internet saw its meme potential immediately.

Here are some of the best edits.

Don't all fans wish that Post would have this sort of reaction to us one day?

And we've all been Post Malone in this scenario.

His expression just perfectly captures that feeling of intense excitement.

Although there are darker takes, too.

Some of the memes are incredibly cute.

Like this innocent take. You wouldn't think an image of a flashing could be so adorable, right?

Were a little less positive in their message. Look after your health, guys!

And some had a social message.

This one is one of our favorites.

Others went for a more depressing take.

And others were a little more simple.

Hey - there's a reason this image was so relatable.

We feel seen by this one.

And, hey, if it weren't for people buying concert tickets, we'd never have had this meme.

This one made us laugh.

Well, one of these options is certainly more cost-effective than the other.

Instead of just roasting ourselves, though ...

Some of the memes take on our pets.

Why do we bother trying to feed our dogs the good stuff?

Because we're all addicts, right?

This is the reason God (or whoever) gave us two hands.

Here's a niche one.

But those who had light-up Skechers when they were a kid get it.

Or how about this one?

What's wrong with getting festive just that little bit early?

Can we say relatable?

When there's something to be avoided, suddenly, almost everyone on earth seems more interesting.

This one has a double meaning.

When we actually make the right decision.

Hey, no one is more shocked than ourselves.

When dogs get it right.

They're just happy to get what they're given - and we could all learn something from that.

Somehow, when something happens as a direct result of what we do, it still comes as a total shock.

Here's a different sort of read.

Nice to feel the heat off of us for once.

This one is oddly heartwarming.

And there have been some oddly cute reactions to what could have been a NSFW meme, too.

Post is a guy who really has it all - but that doesn't seem to have made him world-weary.

But if you're a little bit curious about what Post would look like if he wasn't a musical superstar? Keep scrolling for an incredible Photoshop transformation.