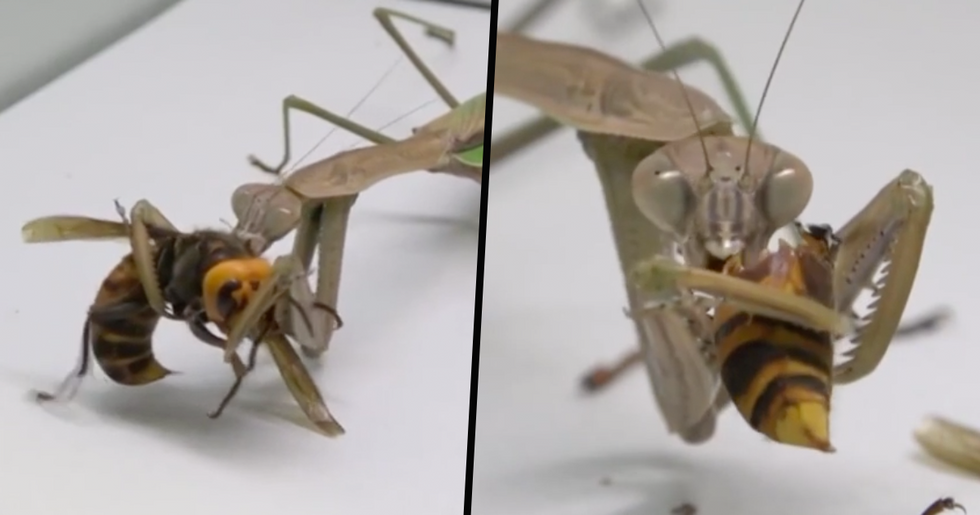 Just when we thought nothing could get any scarier than a giant murder hornet, new footage has emerged of a creature even more formidable, and it might just be the answer to our hornet infestation.

As you will all be well aware by now, the world is under siege by a devastating virus.

Hardly surprisingly, this story has absolutely dominated the news cycle of late.

And to make things worse, a new threat has made it into the headlines... One that'll haunt your dreams for the foreseeable future.

Millions have been quarantined to their homes for the last few months.

So if you're feeling fatigued of pandemic related news ...

How about something completely different?

Here's some news that has nothing to do with the virus.

This is the story of murder hornets in the US. And yes, at first glance they might sound even more terrifying.

Well, a bee breeder at the Washington State University's department of entomology, Susan Cobey, said: "They're like something out of a monster cartoon with this huge yellow-orange face."

Well, because they murder. They're well known for brutally massacring bees. Nice.

Writing in WSU Insider, Seth Truscott said: "Hornets are most destructive in the late summer and early fall, when they are on the hunt for sources of protein to raise next year's queens."

"They attack honey bee hives, killing adult bees and devouring bee larvae and pupae, while aggressively defending the occupied colony," he added. "Their stings are big and painful, with a potent neurotoxin. Multiple stings can kill humans, even if they are not allergic."

First things first: do not attempt to remove them yourself.

"Don't try to take them out yourself if you see them. If you get into them, run away, then call us! It is really important for us to know of every sighting if we're going to have any hope of eradication."

And if you were in any doubt as to how deadly these things are...

This video should assuage any doubts at all. Absolutely horrendous.

However, there's no need to panic too much.

Because we've found a solution to the problem...

A video has recently resurfaced, and it'll instantly put your mind at ease.

Or just give you another bug fear...

Some Twitter users don't know whether to be scared...

Or overjoyed that something can get rid of these terrifying creatures. It is 2020 after all.

While others want to create an army of their own.

The video shows a giant murder hornet going head to head with a praying mantis...

As you can imagine, things didn't end well.

But more surprisingly, it wasn't the hornet that won the fight.

The mantis quickly strikes and doesn't hesitate to chow down on the hornet's head.

You can watch the video below...

Nature is damn scary! Want more terrifying bug content? Scroll on for an enormous spider who's feasting on a rather surprising snack...