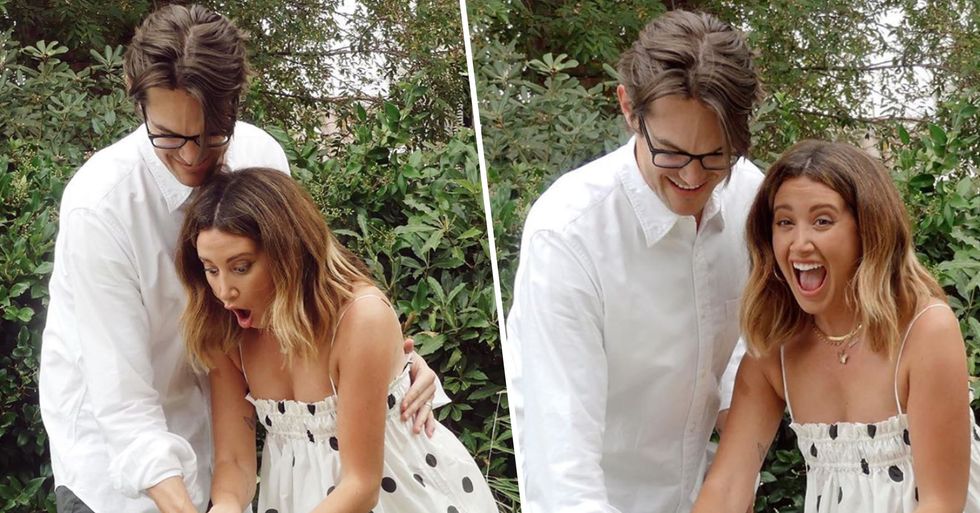 Ashley Tisdale recently posted a series of adorable photos in which she's jumping for joy after finding out the gender of her baby...

Ashley Tisdale broke the internet when she recently revealed that she was pregnant.

The Disney actress used her Instagram platform to tell us all that she and her husband, Christopher French, were expecting their first child together.

Now, they have finally revealed the gender of their baby...

And it's safe to say, Tisdale's reaction was completely wholesome.

The couple got engaged all the way back in 2012.

After meeting through the music industry, the pair immediately fell in love with each other.

Tisdale said she was totally smitten by the handsome, "rocker" look he had going on.

And French obviously knew who Tisdale was and wanted to get to know her beyond the fame bubble.

I mean, who wouldn't?

The actress first gained fame through Disney, appearing in over one-hundred shows and commercials throughout her career.

You'll probably know her from her most popular role as Sharpay Evans in the High School Musical series.

The bratty and self-obsessed character she played in the movies gained her a lot of fans, with her portrayal later becoming one of the most iconic in Disney history.

Name someone that could take on Sharpay Evans... I dare you.

Tisdale also had a brief music career after her High School Musical stint came to an end. And it was through that industry that she met the man she went on to tie the knot with.

Later on, Tisdale even admitted that she knew he was "the one" when she first saw him.

And after a brief year of dating, French got down on one knee at the top of the Empire State Building with a ring.

Of course, Tisdale said yes, and the special date was set for September 2014.

The ceremony happened in secret as they didn't want the paparazzi ruining their big day. Some of our favorite celebs also attended the event, including Vanessa Hudgens, who starred alongside Tisdale in HSM.

Even though the media was not allowed at the event, that doesn't mean we didn't get to see what happened.

Both Tisdale and French shared some beautiful snapshots from the wedding on their socials, and they were stunning. We were obsessed.

6 years later and we're still obsessed with the couple.

Tisdale regularly posts snaps of the 2 of them together, going on adventures, hitting milestones, and just generally being a unproblematic couple.

So, when they announced that they were going to be having a child together, we were all very excited.

The comments immediately started rolling in, even from fellow celebrities who wanted to send their well-wishes...

And recently, we all found out the gender of the baby too.

Tisdale posted a series of cute photographs of her and her husband cutting a cake together, the color of the inside determining if they were having a boy or a girl.

After cutting out a slice, you could just see how just how happy Tisdale was.

Have a look for yourself below...

She first notices the color inside and starts beaming...

Her expressions say it all...

They just look so excited!

They'll be having a baby girl!

We're so happy for the couple and we can't wait to see a mini Sharpay Evans running around very soon. Are you wondering what she's going to name her child? Well, let's just hope it's not something as weird as some of these baby names... keep scrolling to have a look.