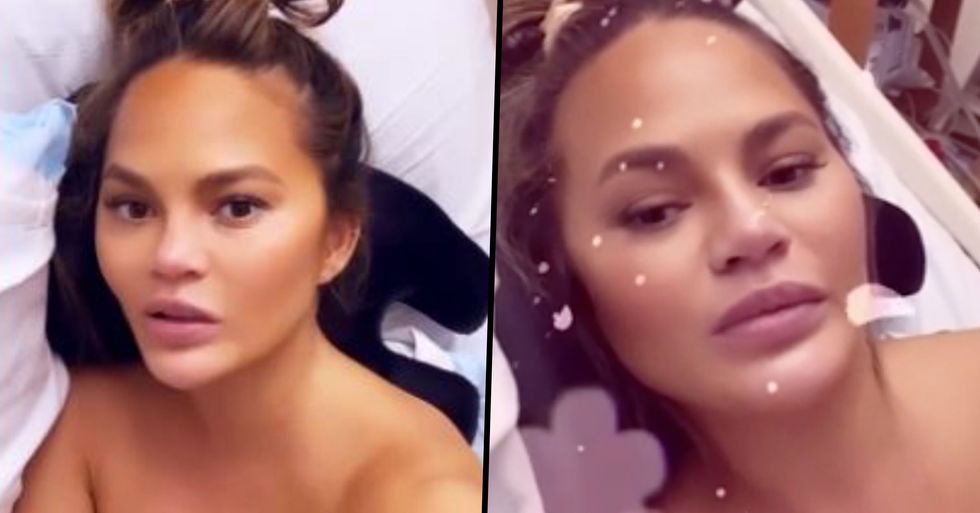 Chrissy Teigen has been hospitalized after experiencing excessive bleeding during her third pregnancy.

Keep on reading to see how she's doing...

Since the exciting announcement of Chrissy Teigen and John Legend's third pregnancy...

Fans have been incredibly excited.

But it seems that there's trouble in paradise...

As reports are in that Chrissy has been hospitalized after experiencing "excessive bleeding."

"We get to the Maldives and he had planned this beautiful Christmas. He knows how much I love Christmas…And this waiter comes out with a silver dome for dessert…So he opens up the dome and a ton of arugula falls out and then I kind of fish in it…And I see the little box and then you know, your heart stops and you get so excited," Chrissy explained.
"There was no big grand speech or anything. I think it was just very lovely and sweet."

Yep, they made their exciting announcement last month...

Via music video, of course. The video was for John's new track, "Wild", and it showed the couple frolicking around on a white linen bed on the beach.

It's a beautiful video...

And clearly, the family is overjoyed with the news!

Of course, Chrissy is now facing a tiring 8 months...

Because we all know how tiring it is to be pregnant! But luckily for her, 4-year-old Luna is on hand to make life as easy as possible.

Luna has been taking things to the next level when it comes to looking after her mom.

At the moment, Chrissy is on "super serious bed rest" due to a weak placenta and little Luna has been running around making sure her mom doesn't lift a finger.

Luna has been running baths for her mom every day...

Reports are in that Chrissy has been hospitalized.

But not to worry guys, she's doing okay!

The star took to social media on Sunday to update her worried fans. "So, we all know I've been on bed rest for a few weeks. And that's like super serious bed rest, like get up to quickly pee and that's it. I would take baths twice a week, no showering. I was always, always bleeding... I'm about halfway through pregnancy and blood has been going for a month...maybe a little less than a month. But we're talking more than your period, girls, but definitely not spotting. A lot of people spot and it's usually fine. Mine was a lot."

But then, Chrissy went on to urge doctors on social media to stop trying to diagnose her.

As long and Chrissy and her baby are healthy...

We're happy! Keep on reading to see John's reaction when Luna called him by his first name...