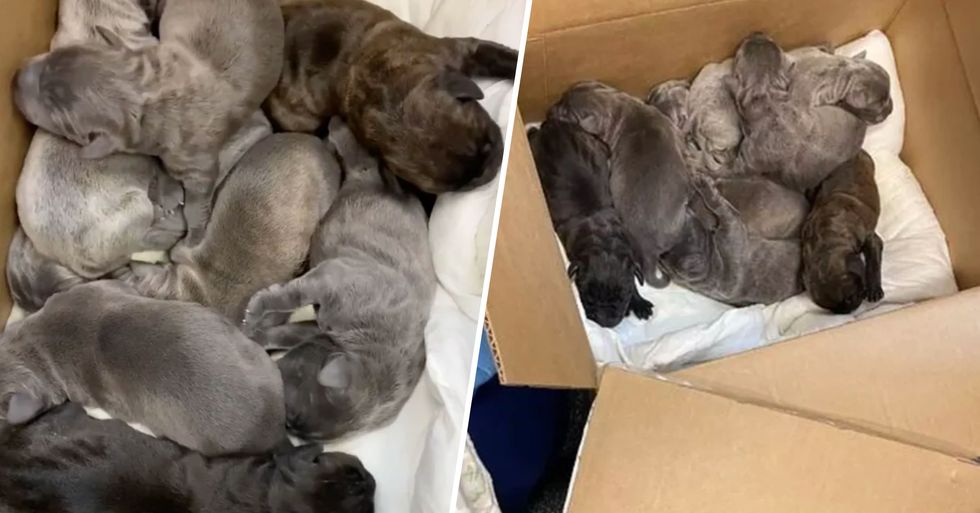 A pregnant Neapolitan Mastiff well and truly surprised her owner after she gave birth to a litter of twenty-one puppies.

Keep scrolling to learn about this fascinating story...

But what is it that we love even more?

Nothing brings quite as much joy as puppies do and they are simply way too cute to handle.

There's nothing cuter than a litter of puppies...

But the reality of a litter is far from what we'd imagine.

But handling a litter of puppies is totally different from caring for just one...

And as any experienced dog handler can agree, taking care of a litter is hard work.

Yes, they are adorable...

But caring for puppies takes almost as much time as caring for a newborn baby... not to mention ensuring the health of the exhausted mom!

On average, a litter of puppies contains around 5-6 pups...

And a dog can have around 4 litters in her life... so that's a lot of puppies.

But on some rare occasions, dogs can produce much bigger litters.

For instance, last year a black Labrador named Beau from Scotland gave birth to a litter containing thirteen puppies. All we can say is... wow.

2 dogs in Australia, one being a Dalmatian and one being a Bulldog, both had litters of nineteen puppies - each setting an Australian record.

But now, that record has been surpassed.

A 4-year-old Neapolitan Mastiff named Shadow, who is from Queensland in Australia, gave birth to her first litter last week.

But this was no ordinary litter...

This was a litter of twenty-one puppies. Yep, you heard that correct... twenty-one.

It was a long and grueling labor...

Shadow was able to naturally give birth to her first 3 puppies, but she soon needed assistance by a team of vets.

Veterinarian Patrycja Zimmermann said, "After four hours of no activity and a puppy that didn't make it, her owner brought her into us expecting the worst." "We took radiographs straight after Shadow's arrival to see if any more puppies were on the way and made the amazing discovery of 10-plus puppies inside."

A team of 10 vets and nurses managed to find the remaining eighteen puppies...

"We quickly checked the fetal heartbeats and were praying for the best outcome for her," she explained.

An emergency caesarian allowed the vets to safely deliver the remaining puppies...

And during the birthing period, vets made the decision for Shadow to undergo a procedure to remove her female reproductive organs - something that may sound drastic but it was necessary to save her life and the lives of her puppies.

It was a rough procedure, however...

Shadow's blood pressure was dangerously low throughout the caesarian and even though she pulled through, she has a long road of recovery ahead.

And tragically, 3 of Shadow's puppies didn't make it.

But sadly, this is a common occurrence in large litters when the smaller and weaker puppies will die just hours after being born.

After surgery, a team of intensive care nurses from our Pet Intensive Care Unit spent the entire day rotating the puppies for a feed from Shadow as she lay in recovery.

The puppies will be sold on to new homes when they are old enough to leave their mom's side.

We're just glad that Shadow is on the road to recovery!

For more dog-related stories, keep scrolling to read about the Great Dane who gave birth to nineteen pups...