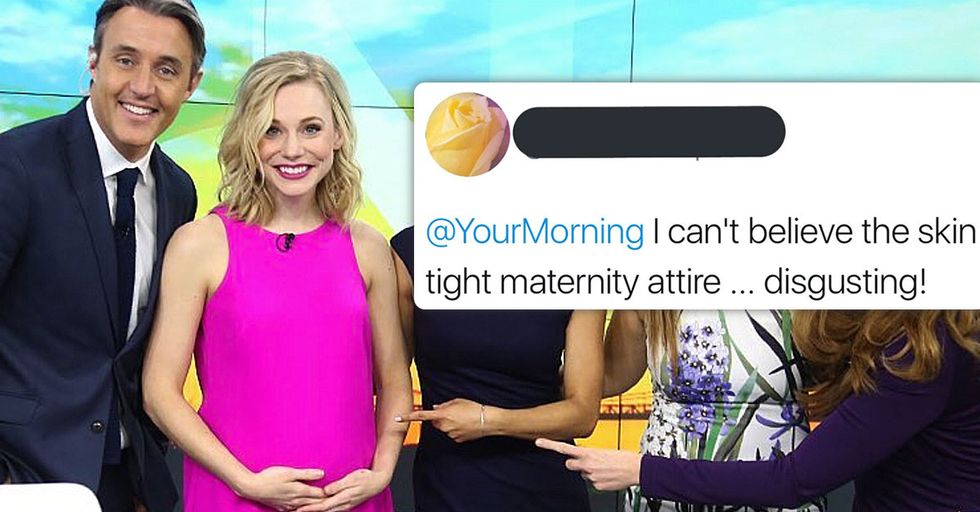 From adding a whole new human (or multiple new humans) into your family, to gaining weight, to picking a name, to oh so much more...there's just a lot going on. And the hormones. The hormones. Eek!

Recently, Canadian meteorologist Kelsey McEwen received a hate tweet from one of her viewers shaming her pregnant body. After reading it, Kelsey just snapped...

She also happens to be Canadian morning show Your Morning's meteorologist. And, as it turns out, a grade A+ body positivity warrior.

As soon as Kelsey started showing, she learned that being in the public eye while pregnant is far from easy.

While there are certainly upsides — fans sending love and light her way — it's those pesky haters that really cast their dark shadows on the whole experience. Kelsey recently found herself face to face with quite the vicious tweet and totally lost her cool.

The tweet, sent to her employer, read, "I can't believe the skin tight maternity attire ... disgusting!"

First, she tweeted out her immediate response:

Then, Kelsey decided to take her payback a step further. She utterly destroyed her troll on an epic live broadcast...

This boss mama-to-be decided to transform her cyberbulling into an opportunity to make a difference.

Kelsey organized a news roundtable on her CTV daily morning show to shed some light on body shaming. In less that two minutes, Kelsey perfectly articulated her points, epically slamming her troll...

Kelsey spoke loud and proud in a segment called My Body Is Not Your Concern.

Her speech was absolutely spot on. We are seriously not worthy.

She posted a follow-up on her Instagram later that day.

We are better. Kelsey's brave speech has since touched countless mothers' hearts all over the world.

Fans all across the Internet have flooded her social media feeds with praise.

When we find ourselves retaliating against a bully, it can become all too easy to wrap our minds up in emotion and hit below the belt. Kelsey 's measured poise imbued her response with unwavering strength.

It's that strength which seems to have inspired so many fans connect with her message.

She is far from the only television host who has had to deal with body shaming like this during their career.

An overwhelming number of stories just like Kelsey's have popped up all across the media. Each one exhibiting disturbingly similar patterns...

TV host Michelle Jobin, for one, experienced similar cyberbullying when she was pregnant.

If you don't have anything nice to say, don't say it. Go for a walk. Do anything else.

She responded to her attack with a personal blog post. In the post, she wrote about the fact that even though she'd been flooded with positivity by so many of her fans, one heated troll's cruelty had managed to outshine all those kind thoughts.

And it's not just pregnant women!

Producers handed KTLA's Liberté Chan a sweater on air last year because they were "getting a lot of emails." Talk about being scarred for life.

But our voices can't be silenced forever.

The more we speak up, the more we flood the media with  the kind of positive acceptance we so rightfully deserve. Our bodies are strong. They make babies for crying out loud! They deserve respect, no matter how they're clothed.

What do you think about Kelsey's segment?

We're moved my her powerful words. Enough is certainly enough.