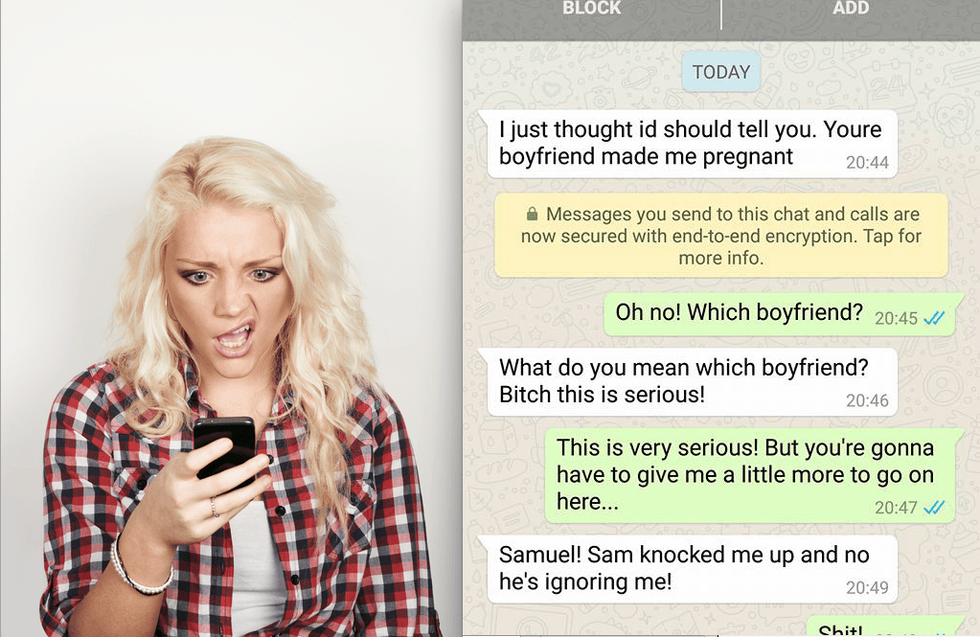 Buckle up, ladies and gentlemen, because this story is a wild ride filled with confusion, humor, frustration, memes, drama, and someone locked in a trunk.

The story starts out with this conversation:

To be clear, the baby mama says, "I just thought I should tell you. Your boyfriend made me pregnant." The person on the receiving end, who doesn't know who this woman even is, jokingly responds, "Oh no! Which boyfriend?" The pregnant woman is having none of that crap and is pissed at Sam while the recipient sees an opportunity for a little fun.

At this point, you probably want to grab some popcorn.

Trust me. The story's only going to get better from here. Settle in.

So the comedian on the receiving end starts asking what Sam it could be...

They start by texting pictures of characters like Sam from Supernatural.

And then move on to Samwise Gamgee from Lord of the Rings.

And then Samwell Tarly from Game of Thrones. But it didn't stop there...

I don't know about you, but I'm already having a lot of fun reading this conversation.

I'm not sure how I would respond to this person, but I like to think I'd be as on top of my game as this person was. They really played the whole thing perfectly.

The side chick can't believe "Sam's girlfriend" isn't concerned about the situation, and decides it's because she is "crazy."

I don't blame you.

But you're nowhere near as confused as the woman who is claiming to be carrying Sam's baby.

Whether or not the recipient wanted it, this has escalated into a full-on text war, complete with dope memes.

You might not be able to handle what happens next...

At this point, I'm actually more impressed than anything.

Anyone who has a Supernatural meme for every situation is a pro in my book.

Now it's time for a little lesson.

It's got to make pregnant lady preeeeeetty angry to get a grammar lesson from the person she's trying to confront. But does she take it and move on? Click next to find out.

The lessons have only just begun.

There are more where these came from.

This person has a very particular set of skills. Who knew being super familiar with Supernatural would be so useful?

It's at this point side chick can't deal and asks if the recipient "has" Sam, to which our hero responds that Sam's been locked in the trunk (boot) of the car.

Bummer, Sam. But at least he would stay out of trouble. How much more joking can this woman take? Keep reading to find out.

I like Supernatural as much as the next person, but pretending you have someone locked in your trunk is definitely a pretty bold move.

Side chick can't take any more of the jokes and just might be close to a realization...

Is she starting to figure it out?

I guess there is such a thing as too many Supernatural memes.

And, if I'm being honest, I was reaching my limit, too. I can hardly blame her.

And BINGO! Ya think?

She got it! Want to hear how it all gets resolved?

You finally figured out that you had the wrong number the whole time! It took a while, though...

At the end side chick apologizes, but not without parting shots on both sides.

Come on, now. We've all been having a little bit of fun here, haven't we? I guess Sam's paramour was slightly less entertained than the rest of us.

She doesn't seem too worried about him, but from how he's described, he probably wasn't a winner.

At least she could spell "psycho" correctly.

Good luck with this whole situation. Maybe try looking through Sam's phone for the actual number of his girlfriend. It should be in there, right?

Obviously, this isn't the only wrong number text that went horribly/hilariously. Here are a few of our other favorite texts from wrong numbers:

I applaud this person for trying to explain the situation, but we all know there's no hope here, right? You're just going to have to continue this conversation forever.

Oh, Kimber, you sweet summer child. I'm just going to say this: Anyone who has a signature on their text messages probably won't be able to figure out what went wrong here.

Is he...trying to parlay this wrong number into a sexting situation? He isn't, right? IS HE?!

Then what's the right number?

Just tell her what the right number is. You totally know, right? If you don't, just ask Joyce.

How does this even happen?

I assume this is the first message ever sent to this number...but why?! Why would that be your opener? You're doing a lot of things wrong here, friend. Including typing in phone numbers.

This one hurt to read:

I guess there's something to be said for getting everything out in the open, but this is definitely not how you should do that. Share this with someone who loves a funny story!